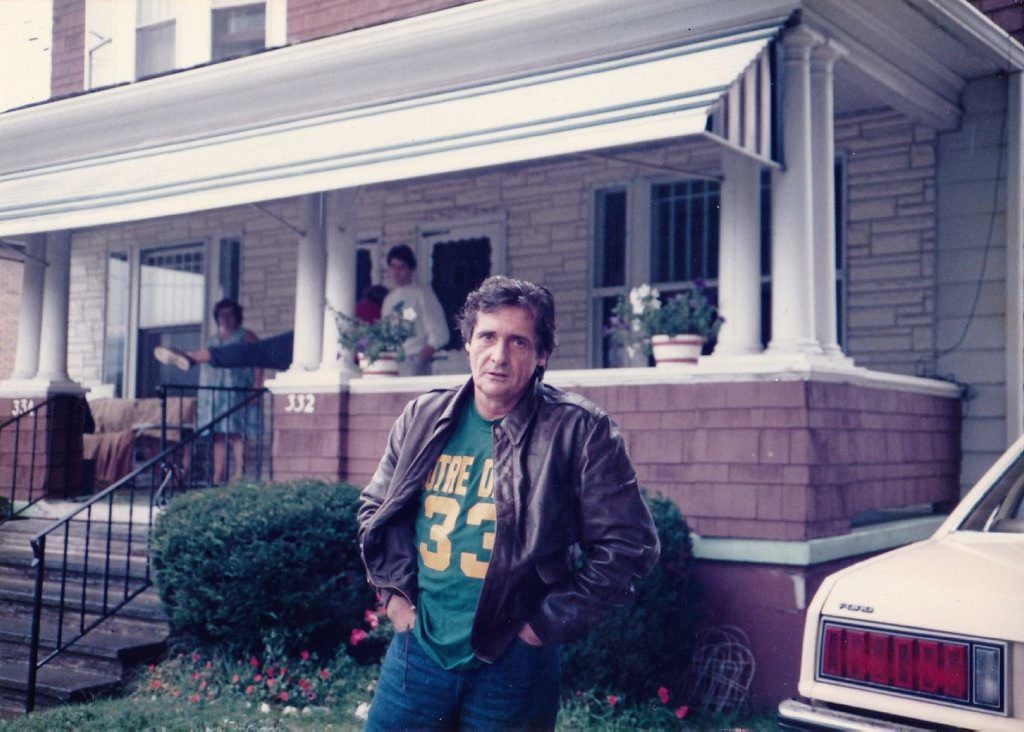 COURTESY OF BILL WATSON Scranton native Jason Miller, who played an exorcist in the movie ‘The Exorcist,’ stands in the Watsons’ front yard next door to the Smurls. 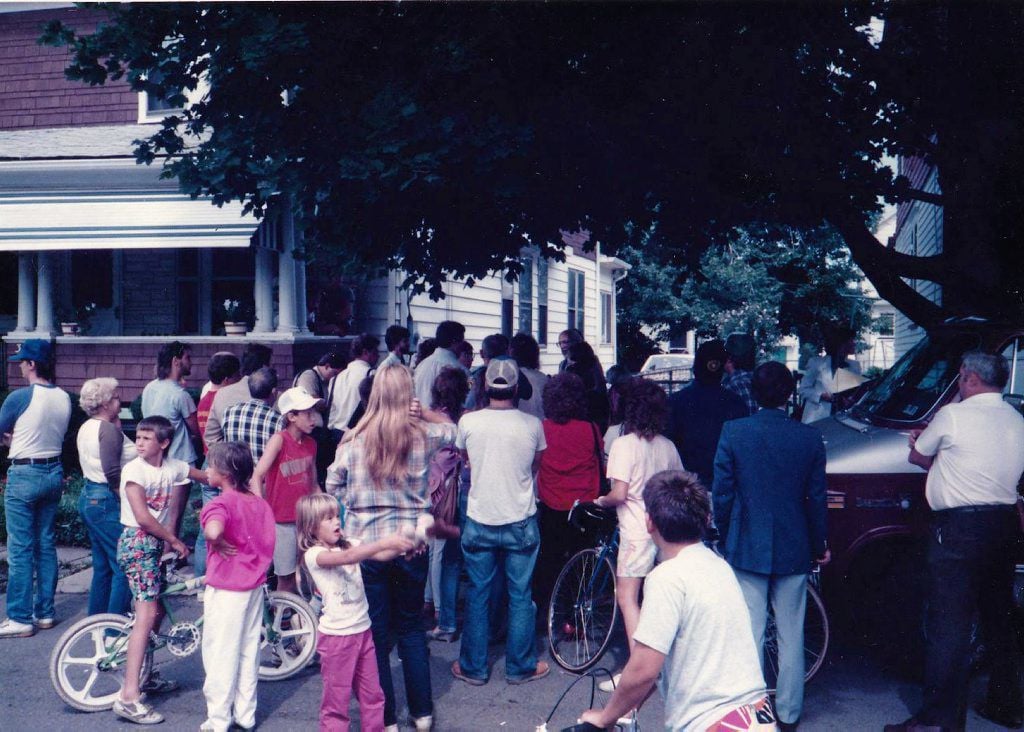 COURTESY OF BILL WATSON Onlookers flood neighbor Bill Watson’s driveway in 1986 to get a look at the infamous Smurl home in West Pittston.

Imagine a walk through a Halloween haunted house where the stink of rotting flesh and the sounds of beastly hoof beats and inhuman howls and screams assail the senses.

Imagine gossamer threads — a mucous-like, smoky type substance — whirling and materializing on a mirror spelling out obscenity-laced orders to get out, as lights flick off and on and doors fly open and slam closed.

Now imagine a house where it may have all been real.

So it was 30 years ago in 1986 when the home of Jack and Janet Smurl on Chase Street in West Pittston was the scene of one of the most infamous hauntings in the annals of paranormal activity. The West Pittston haunting in so ingrained in paranormal culture it rivals Amityville's notoriety.

After the Smurls went public with their descriptions of what was happening in their modest, half-double home on Chase Street in West Pittston, their story became a media phenomena going "viral" the old-fashioned way — through print and television. Local and out-of-town stations and papers covered it. Wire services stories ran in major dailies from New York to California.

Bill Watson lived right next door to the Smurls. He still lives in that same house. He recalls what it was like on his normally quiet street during the height of the media madness.

"Everything got out of control," Watson said. "CNN was here on my porch. There was a camera crew from Germany in my driveway. There were so many people I could hardly get my car out to go to work."

In addition to the media, crowds of rubberneckers swarmed the tiny street night and day. Carloads of teenagers and families cruised by pointing and laughing, a motorcycle gang wearing devil insignia roared down the street; limos and a bus from a bar in Scranton brought parties to Chase Street; a truck selling pizza and hoagies parked at the end of the street.

In 1986, Watson and his wife, Phyllis, had a daughter, Debbie, and son, Paul, living at home. Debbie, then 21, whose second floor bedroom was just 15 feet from the Smurls' upper floor, heard scratching at her window and experienced her room turning ice cold. Son Paul heard the strange tapping when he was visiting the Smurl house one evening. Phyllis and Bill also experienced unexplainable phenomena.

In the book "The Haunted: One Family's Nightmare" — which was co-written by Robert Curran, then a reporter for Scrantonian-Tribune; the Smurls and celebrity demonologists Ed and Lorraine Warren — Phyllis said she wondered if her friend, Janet, had let her imagination get the best of her, until the night she heard "piercing and ragged" screaming coming from the house. Bill also heard noises which he described in the book as sounding like "some gigantic bird trapped in the house and trying desperately to get out."

Among the visitors to the Smurl house was Scranton native, Pulitzer Prize winning playwright and actor Jason Miller, who played Father Damien Karras in the 1973 horror film The Exorcist. Though Miller, who died in 2001, didn't experience any of the phenomena in the house, he was sympathetic to the Smurls and believed something was going on, even if he didn't fully accept it was demonic possession. He told the Scranton Times the Smurls were "Terrified that the infestation of the home will go to the family."

Ed and Lorraine Warren were the founders of the New England Society of Physic Research. They investigated the haunting in Amityville, New York, which spawned the Amityville movie franchise which began in 1979 with the "Amityville Horror" and has spun off 17 theatrical and TV sequels. Ed died in 2006 at age 80. Lorraine is 90.

Ed and Lorraine are also the lead characters — portrayed by Patrick Wilson and Academy Award nominee Vera Farmiga — in the Conjuring movies. They spent a lot of time with the Smurls and added a sense of legitimacy to the claim of demonic possession.

Of course there were skeptics. After a Mass at the Smurls' parish, Immaculate Conception in West Pittston, where a prayer was offered for the Smurls, two women told Pittsburgh Press reporter Gary Rotstien, "They're trying to get a movie made in West Pittston, that's all there is to it."

"The Haunted," a made-for-TV movie based on Curren's book, starring Sally Kirkland and Jeffrey DeMunn as the Smurls and directed by Robert Mandel, was aired in May 1991.

With a book published and a movie made, local newspaper columnists accused the Smurls of running a scam for money. Carin Smurl, who along with twin, Shannon, is Jack and Janet's youngest daughter, said the notion that her parents — two ordinary working class Catholics who met when they worked at Topps in Duryea — could have concocted a haunting scam for money and pulled it off is absurd. Carin is a social worker at Step by Step, a paranormal investigator and radio co-host of a Para-Gurlz &amp; Apocalypse Nation radio program. She is often a guest on paranormal radio programs.

"We never made money from the book or movie," she said. "Who would want to go through all that media and public bashing? To the naysayers, I hope it doesn't take something as extreme as what we went through to make them believers. We wouldn't wish our experiences on anyone."

The Smurls, who said the attacks began on the night following their oldest daughter Dawn's Roman Catholic confirmation, did petition the Scranton Diocese for an exorcism. The Scranton Diocese asked the Rev. Alphonsus Trabold, exorcist, professor and paranormal expert from St. Bonaventure University, in New York, to investigate. Father Trabold believed the Smurl family was sincere and that something happened, but he couldn't say it was demonic.

The Warrens brought the Rev. Robert McKenna of Our Lady of the Rosary Chapel in Monroe, Connecticut, the Warrens' hometown, to West Pittston. Considered a "rogue" priest because of his rejection of Vatican II, he attempted two exorcisms in 1986, but the mysterious happenings continued.

Carin said what her family went through didn't spoil Halloween for the kids. "My mom always tried to keep as much normalcy as possible in our lives in spite of what was happening. My sisters and I always dressed for Halloween and went to Halloween parties. To this day we celebrate with our own children and my mom still hands out candy to trick-or-treaters. We all still enjoy the classic horror films and the holidays. We didn't let it win by taking away the fun moments in life."

The Smurls moved to Wilkes-Barre in 1988, where twin daughters, Carin and Shannon, were all-star athletes at GAR and played on the Wilkes University women's basketball team. Subsequent tenants at the Chase Street home reported no disturbances.