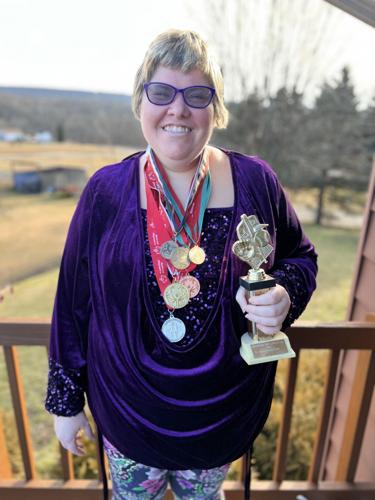 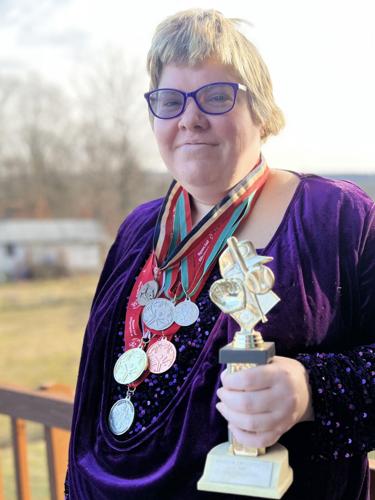 At left, is Chrissy Wesley with her Special Olympics medals and Little League trophy. In addition to playing several sports, Wesley also volunteers extensively with her church and in the community. Below is Wesley with her sister, Nicole Wesley and mom, Judy Wesley. 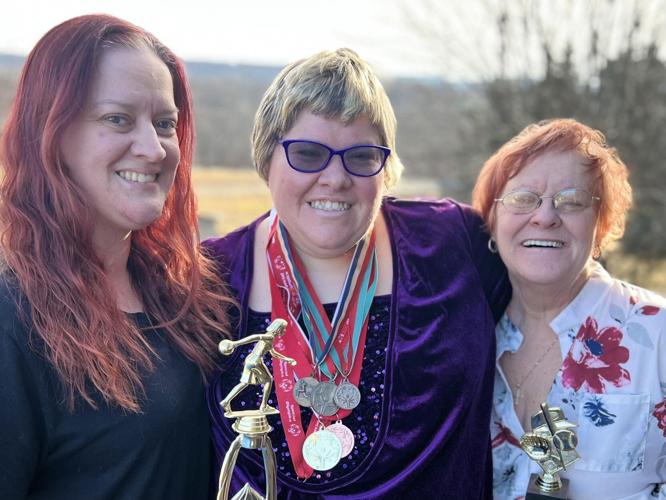 At left, is Chrissy Wesley with her Special Olympics medals and Little League trophy. In addition to playing several sports, Wesley also volunteers extensively with her church and in the community. Below is Wesley with her sister, Nicole Wesley and mom, Judy Wesley.

Chrissy Wesley, 42, of Dupont, is truly an unsung hero. A champion both on and off the field, she is the epitome of strength in adversity. An optimist who helps others count their blessings, and a ray of sunshine on even the cloudiest of days.

Wesley is a 2001 graduate of Pittston Area and Wilkes-Barre Area Career and Technical Center who was inspired by “Mr. Sperazza at Pittston Area,” and “Mr. Albright at tech.”

Former Pittston Area special education teacher Mike Sperazza first met Wesley when she entered ninth grade. Her parents, Judy and Harold Wesley, Dupont, warned Sperazza that she would not talk much. Initially, she would nod yes or no; however, as rapport developed between them, Wesley began smiling more, laughing often, and even talking. “That’s when her personality really came to life,” Sperazza said.

“I had morning allergies, and as I would sneeze, Chrissy would count my sneezes aloud. One time she yelled ‘Mr. Sperazza, you broke your record!’”

“Chrissy was such a joy. I am proud of all my students, but the late David Galli, and Chrissy are the epitome of inclusion. Theirs are absolutely huge success stories. They went on to be extremely active and beloved in our community,” Sperazza said.

“Everywhere we go, people know Chrissy. I say, ‘Who was that?’ she says ‘You know, Mom, that’s ... She always knows. She’s always right,” Judy said.

One look at Wesley’s social media, and you’ll see she is friends with local musicians, priests, politicians, lawyers, and another group who have something special in common with her — those who make a difference volunteering in our community.

“I am very active in my church. I give Communion, and on First Fridays I take Communion to shut-ins,” Wesley said. She is also a volunteer fourth and fifth grade CCD student aid teacher who volunteered at Highland Manor, pushing people in wheelchairs and helping with games, prior to COVID limiting access.

“I like helping people. It makes me feel good because sometimes people have no one else to help them. Then I feel proud,” beamed Chrissy.

During COVID, when fun, safe options for children were limited, Wesley independently planned an Easter egg hunt for children she knew. “I filled and hid the eggs in my backyard, and I have grown the event over the last two years.”

While an avid supporter of local music, Wesley is also personal friends with many local big-name bands: QBALL, East Coast Trio, The Sperazza Duo, and Wannabees, to name some of her favorites.

Eric Sperazza, of The Sperazza Duo/Jeneric, said, “Chrissy was the Sperazza Band’s most dedicated and sweetest fan. We could always count on her saying something witty when guessing which song was next. She is one of the great supporters of live, local music in our area, seeing multiple bands almost daily. Chrissy is always having fun, and in turn, she brightens every venue.”

“Chrissy played Challenger Little League for about 20 years. When she aged out, she went into Victory Sports for about 12 years,” explained sister Nicole Wesley, 41, of Avoca.

“The Special Olympics have really brought Chrissy out of her shell,” said Nicole. “She used to be very shy. She didn’t speak until she was 4-and-a-half years old; however, since Special Olympics, she has made new friends all over the state. She talks to everyone now.”

In Special Olympics, an athlete does not simply appear on competition day. It takes training, discipline and commitment.

“We practice on Mondays and Wednesdays at Kirby Park, and we have to improve our qualifying times. I have participated in long distance walking, bocci ball, bowling, and track,” detailed Wesley.

“I love our Special Olympics days. I wake up and feel fantastic, very excited. We go to DeSalle University, and Villanova for track. I go to Bloomsburg for Bocci Bash, and I’ll compete again in the spring and fall of 2023.”

The Wesley’s kitchen table is covered in Chrissy’s more than 50 ribbons, medals and trophies — all earned through hard work, dedication and a whole lot of fun.

“She is everyone’s cheerleader. A girl was crying because she didn’t win. Chrissy went over, hugged her, told her not to cry because they are all working together. The girl cheered right up!” Judy beamed.

“Chrissy was raised with the same expectations as me and our brothers Patrick and Joe,” said Nicole. “Disabilities don’t define people. Set goals. Follow your dreams. Work hard. It might take Chrissy a little longer, but she always gets there. Don’t patronize, and don’t treat people with disabilities differently. People will meet you at their level.”

What is the most important lesson someone can learn from Chrissy? “Love. Love for family, friends, neighbors, everyone. Love makes the world a better place,” replied Chrissy. Spreading some of that love, Chrissy would like to wish a surprise “happy birthday” to her mom.