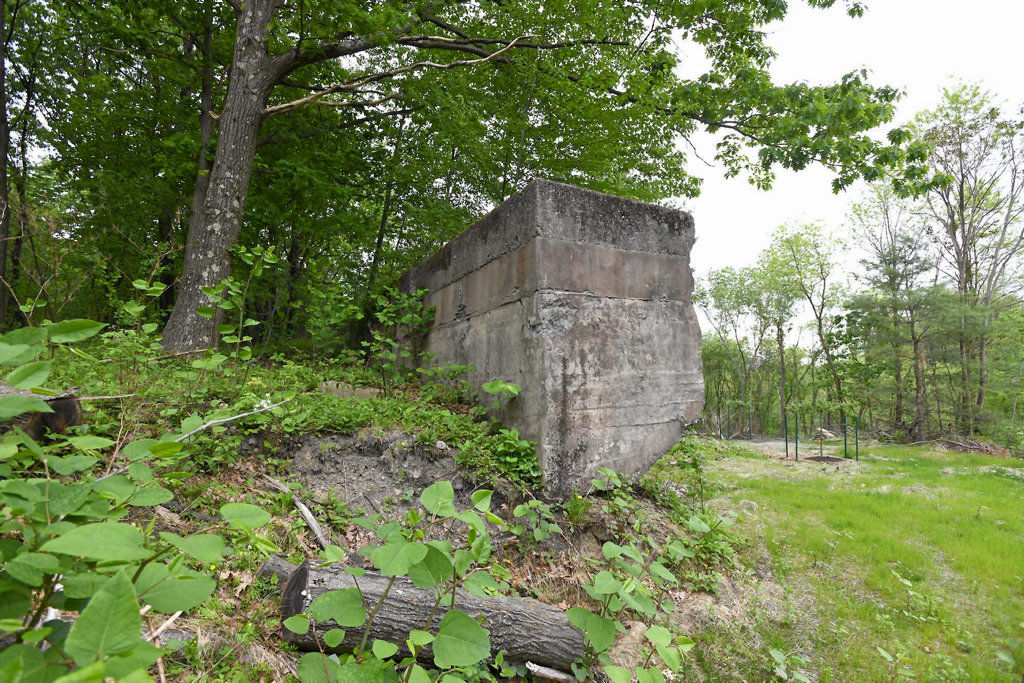 MARK MORAN / STAFF PHOTOGRAPHER Remnants of the viaduct of the former Laurel Line near the entrance of Valley View Estates, once Valley View Park. 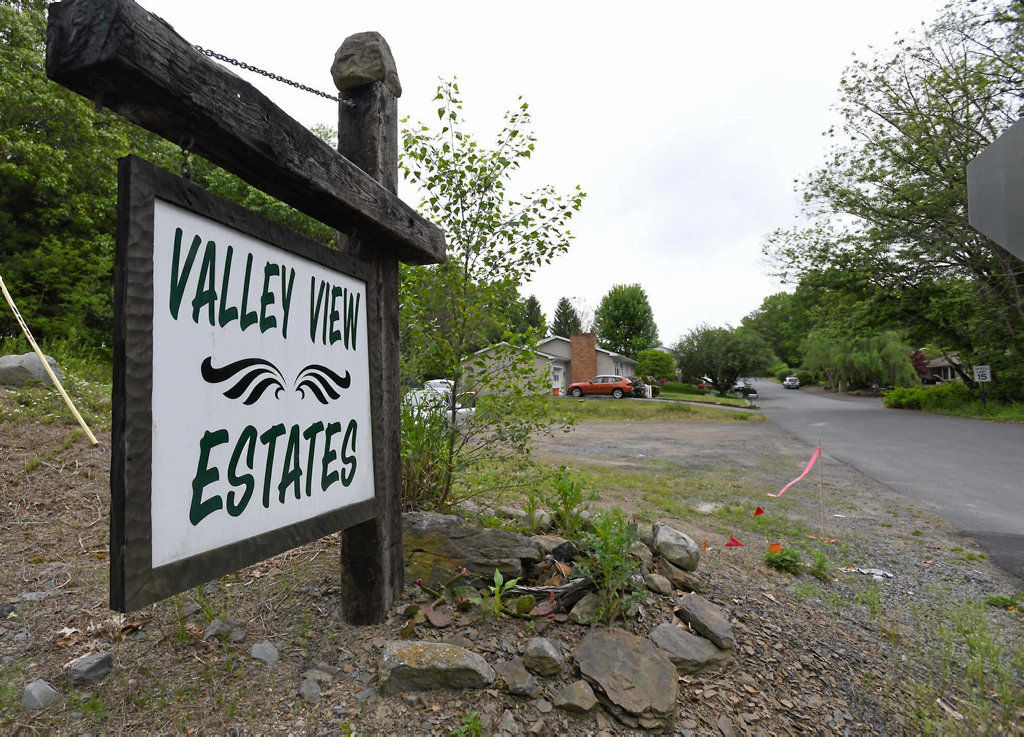 In 1904, on a hillside plateau just east of its Inkerman Station, the Laurel Line built a 40-acre picnic grounds they called Valley View Park. Well named, the site had a commanding view of the Valley. A 700-foot siding, long enough for nine cars, was put in for Laurel Line trollies to access a platform where passengers hopped on and off.

A shale sidewalk led from the platform to a 100 x 40 dance pavilion and four, 15-square foot yellow-painted refreshment stands with galvanized steel roofs. Picnic tables and benches, rustic chairs, and swing sets scattered in the shade of oaks, pines and silver birches were connected by ash sidewalks. Five faucets delivered Spring Brook water. The park was half wooded and half open to allow the Valley views. Daniel Galvin from Scranton was the superintendent. Daniel Howell, a well known Pittston Civil War veteran, was the night watchman. He patrolled the plank fence around the park perimeter.

The Laurel Line, officially the Lackawanna &amp; Wyoming Valley, hoped the park would increase weekend ridership. It was a good idea, but not an original one. Interurban trolley lines all over the country built "trolley parks" beginning in the 1880s.

Valley View was a five minute ride from the Pittston city station on Market Street between Lagrange and Spring Streets and seven minutes from the Hancock Plains station. The park opened in July, 1904.

That same year Rocky Glen, which had opened as a picnic grounds in the 1880s, was rebranded as an amusement park with rides and other midway attractions installed. But Valley View and Rocky Glen were not competitors. The Glen had a bar in the Swiss Cottage and patrons brought in alcohol. Valley View was alcohol-free. The policy was strict. Alcohol was not sold and security was directed to eject anyone bringing alcohol into the park — "with force if necessary." In a newspaper story about the park opening, the Laurel officials said they "hoped to attract a better class of people."

The alcohol ban didn't hurt the attendance, in fact the park flourished for decades. Families who had taken the pledge held large reunions and temperance organizations, church clubs and ethnic groups booked the park for huge festivals and celebrations. The St. Aloysius Society's July 4 picnic in 1904 was the first big event. It drew thousands with trolley cars arriving every 10 minutes. A newspaper report said, there was " an abundance of refreshments with a variety of temperance drinks." Kids entered age groups foot races, bat and ball games, and a silk parasol competition for girls. An evening Concert by Leek Coronets closed.

Also the first summer, the Dial Rock DAR and the St. James Episcopal Church and Sunday School had picnics. On June 24, the Laurel Line ran a special train for 100 newspapers writers. They toured the entire line, stopping for a break at Valley View.

In November 1905, volunteers erected poles for electricity in an agreement with the Laurel Line. Father Fahey of St. Mark's Parish grabbed a shovel and helped dig post holes. Later that month, the Avoca Athletics and Plainsville played a Thanksgiving day football game. Admission was 15 cents.

In 1906, the Inter-Association Baseball League with teams from Pittston, Scranton, Wilkes-Barre and Nanticoke played at Valley View Park. Lithuanian Day, an annual event for decades, began in 1913. It was always big, but 1921 topped all. Staged to raise money new orphanage in the Scranton Diocese, it began with a High Mass sung by the combined choir of all Lithuanian churches in the two counties. Events included a military drill by Battery B Field Artillery, baseball, boxing, field events and music for dancing. A foot race from the Hotel Hart in Wilkes-Barre to Valley View drew top runners from around the country including Frank Zuna, who won the Boston Marathon that same year, ran in the '24 Olympics and was the first American to break 2:40.

In the 1910s, Alexander's band played for dancing every Tuesday. In 1915 hundreds of Polish Falcon Boy Scouts marched to the park from Pittston, set up tents and camped for the night. Also in 1915, a merry-go-round, shooting gallery, doll baby and cane rack and penny arcade were added.

Over the decades, the Welsh had singing competitions, the Friendly Sons had picnics, St. Rocco's Parish ran festivals, the Summer Girls Club had dances for soldiers and sailors, the first aide corps of the coal companies staged competitions with events like live-wire rescue.

On July 3, 1920, 16 Laurel Line riders were killed when a local car was "telescoped" between a two car train packed with Valley View picnickers, which had slowed so conductors could collect fares, and a second local.

The park remained popular throughout the 1920s and the mid 30s, finally closing in 1941. One of the last events was a Jenkins Twp. Policeman's Ball with entertainment by Bruno Kryger, King of the Polka.

Today the park site is Valley View Estates, a housing development on Para Drive off Market Street and the land behind those homes up to Union Street across from the Tipsy Turtle bar and restaurant.