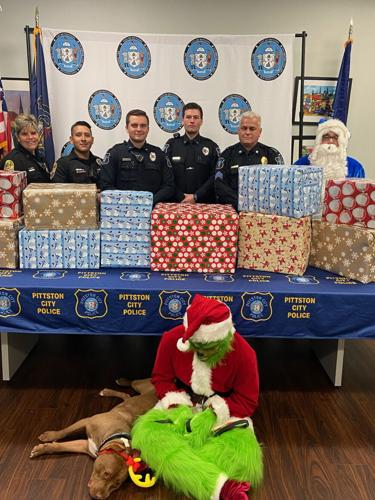 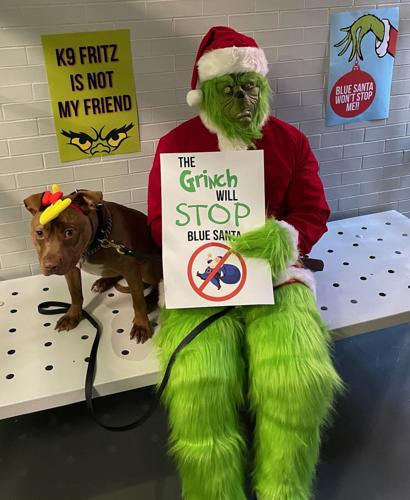 Part of a skit that the officers put on for the children and their families. 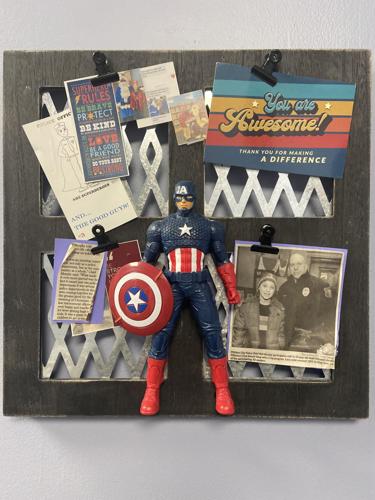 After former Pittston Police Chief Neil Murphy bonded with Noah during 2021’s “Shop with a Cop,” Murphy received the following keepsakes from Noah. The two have remained in touch, and enjoy what they both expect to be a ‘life long bond.’

Part of a skit that the officers put on for the children and their families.

After former Pittston Police Chief Neil Murphy bonded with Noah during 2021’s “Shop with a Cop,” Murphy received the following keepsakes from Noah. The two have remained in touch, and enjoy what they both expect to be a ‘life long bond.’

Former Pittston Police Chief Neil Murphy, now a Luzerne County detective, had a specific goal in mind when he was appointed the city’s chief in November 2020: Get the Pittston police more involved in the community.

“We’re supposed to be the good guys; but, around that time, we weren’t being seen in the most favorable light. I wanted to change that, especially for kids. So, we rescued Nova, a highly neglected, abandoned pitbull who became an emotional support dog. We started bike and foot patrols so people got used to seeing us, and knew they could approach us,” Murphy said.

If Murphy was looking to make life brighter for children, well, let’s just say, he didn’t stop there.

“Shop with a Cop was being done elsewhere, and I took the idea to Pittston Mayor Michael Lombardo and Mary Kroptavich, Main Street manager. I worked with Mary, and together we created what it is today. It’s very touching, and hard to put into words,” Murphy said.

“I wanted to bring Shop with a Cop to Pittston because we go into homes and know some kids don’t have much. Often, we are the ones taking away a parent, or coming in after a traumatic event. Some kids see us on the worst day of their lives. So, we wanted to create good memories for these kids, to let them know we are here for them,” Murphy said.

“Good memories and strong bonds were created at our first Shop with a Cop in 2021. The kids were given a gift card to use in the tent of local vendors. They shopped with an officer, buying gifts for their family. The kids didn’t know it, but their family was given gifts for them,” explained Murphy.

This year, even more children and family are receiving help for the holidays.

Doubling the number of children to 200 for 2022, each child is paired with an officer, given a swag bag, and $100 gift card for the heated, outdoor Vendor Village.

The shopping is just one aspect of the day. There also is food and entertainment provided for the young participants. After doing their shopping, the children visit Santa, receive a gift off their list, donated by the Greater Pittston Santa Squad, and receive a hot lunch courtesy of Mary L. Santi, of Santi’s food truck.

“Officers couldn’t do enough for the kids. There were off-duty officers, emergency responders, all lining up to shop with kids, all wanting to make a difference,” Murphy said.

Murphy explained the Shop with a Cop experience has had a lasting impact on the children and first responders who participated.

“I was paired with Noah, who initially wasn’t sure he wanted to be there, but we forged a lasting relationship,” Murphy said. “Following Shop with a Cop, Noah made me a plaque that says ‘Not all heroes wear capes.’ It had pictures of us at the event. We get together. That day made a permanent impression on both of us — and many others — positive, lifetime memories.”

“When we are able to do an event like this, it is an opportunity to take back control. We are here for them in good and bad,” said Murphy. “We take the bad stuff home with us, but this helps us flip the coin.”

“It was so fun. We all enjoyed being with the kids, definitely a positive interaction for everyone involved. The parents were so grateful. The girls weren’t interested in anything for themselves, but they were really excited to have the opportunity to shop for their family. It was truly heartwarming.”

Initially, the girls were “bashful,” according to Jacobs, but they warmed up.

“The experience opened my eyes to how selfless the younger generation really is. It gave me a sense of hope that children are being raised right,” Jacobs said. “I can’t wait for this year.”

Elementary students living with parental deployment, homelessness, or other hardships were eligible to apply for participation. Enrollment is now closed, and only children already registered can participate in this year’s Shop with a Cop event.

It is expected that 50 to 60 area police officers, first responders and district attorney’s office personnel also will participate.

Families in need aren’t the only ones getting a little Christmas help through the city’s holiday efforts.

Throughout the pandemic, Kroptavich was concerned about the artisans and vendors who had always supported Pittston and she wanted to return the favor. Merging Murphy’s and Kroptavich’s ideas quickly became a cherished tradition in Pittston: Shop with a Cop and the Downtown Pittston Partnership’s La Festa Natale holiday market. Area vendors are invited in for the shopping event to help give a boost to their businesses while spreading some holiday cheer.

While registration for the Shop with a Cop portion of the event has closed, the public is encouraged to take part in the rest of the activities at La Festa Natale on Saturday, Dec. 3.

The public is invited to shop the more than 30 local vendors in the Vendor Village, located at the Middle Tomato Festival Lot in downtown Pittston from noon to 8 p.m.

Admission and parking are free.

Downtown restaurants will be open throughout the day and there will be tables under a heated tent for enjoying food truck meals. Downtown businesses also will be offering discounts and promotions during the event.

In keeping with the holiday spirit of giving, those attending La Festa Natale are asked to bring a new, unwrapped toy to be donated to the Greater Pittston Santa Squad.

“This day shows the true meaning of Christmas, while also spreading Christmas magic. We are profoundly thankful for our sponsors’ support, without whom we couldn’t do this,” Kroptavich said.

Noon to 8 p.m.: Shopping in the Vendor Village and food at local restaurants and from food trucks on site. Seating will be available in heated tents.

4 p.m.: Singing sensations from Summer in the City