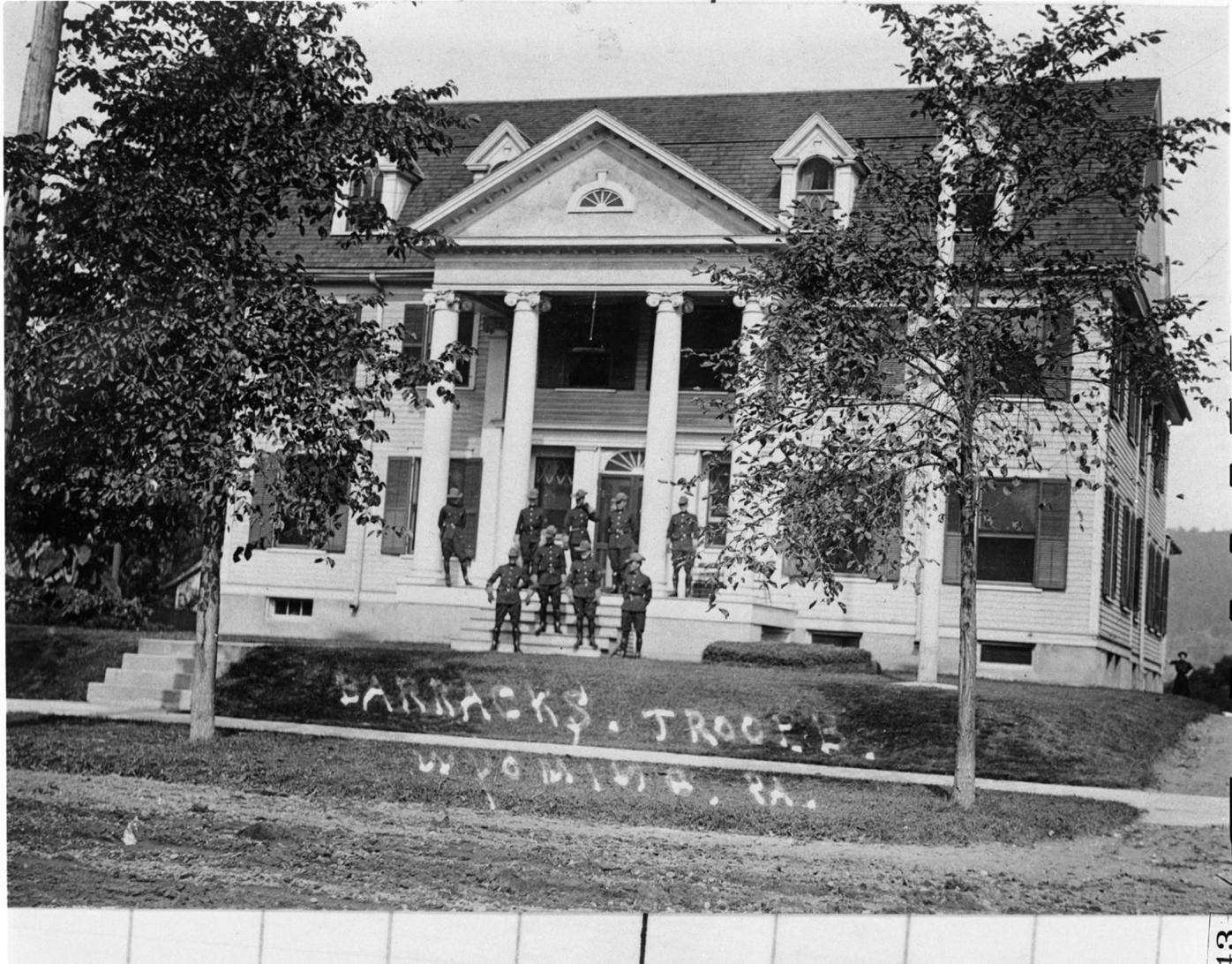 Troopers stand in front of the old barracks in Wyoming in 1910, the year it was built. 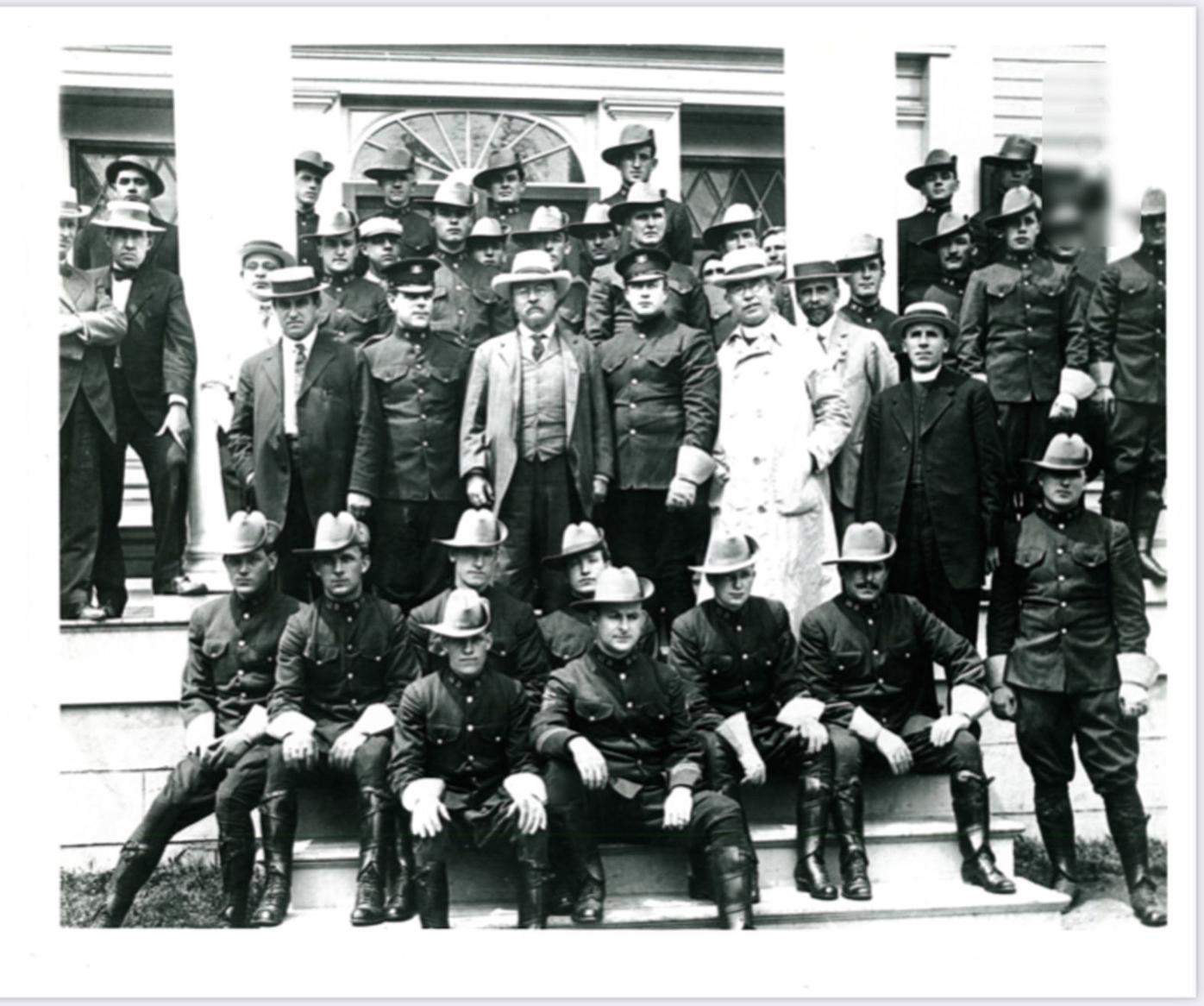 Troopers stand in front of the old barracks in Wyoming in 1910, the year it was built.

After the flags were lowered for the last time at the Troop P Pennsylvania State Police Barracks in Wyoming on March 2, the troopers and staff set out to caravan to their new digs in Hanover Twp., ending 115 years of state police history in Wyoming Borough.

A state police constabulary, the first in the United States, was created by legislation signed by Gov. Samuel Pennypacker on May 2, 1905 in response to violence — mostly perpetrated by the mine owners’ infamous Iron and Coal Police — during the Great Anthracite Strike of 1902.

The first commander, Colonel Groome, went to Europe to study forces there. The Pennsylvania force was modeled after the Royal Irish Constabulary and Royal Canadian Mounted Police.

On Dec. 15, 1905, 57 men were assigned to what was then Troop B and reported to the Bennent Building in Wilkes-Barre to be sworn in. The troopers were quartered in private homes in the city. Office space was leased from the Kulp Detective Agency for $10 a week. The troop’s horses were bordered in Wilbur’s barn on Carey Avenue.

In March 1906, the state leased the Hancock property on Wyoming Avenue in Wyoming and moved Troop B there. In those days in the summer the Wyoming Barracks fielded a baseball team and played other barracks’ teams. During the winter the men were sent from Wyoming to substations in Peckville, Shickshinny, Tunkhannock, Portland and Hughesville. In 1908, the men leaving for the winter got a send off. The barracks were decorated with flags and flowers, and after a banquet, the Diamond City Quartet and Ivy Leaf quartet entertained.

On Dec. 23, 1908, a fire destroyed the barracks. Several troopers were inside. Some jumped out a second story window. Private Henning slid down a rain pipe and fell 20 feet. Wyoming Hose Companies No. 1 and No. 2 and West Pittston fought the fire. The troopers got out, but everything inside was lost. The troopers moved into Wheeler’s Hotel and then to the Wolfe House next to the Presbyterian church until a new barracks was built. The horses were moved to stables on the rear lot of the Wyoming town hall. Construction of the new barracks started in October 1909. The troopers moved into the colonnaded new barracks in February 1910.

In 1909, John Garacia, 30, a trooper assigned to Wyoming, was shot and killed in Inkerman while attempting to make an arrest. He was the first of 10 Troop P troopers who would be killed in the line of duty.

In August 1910, President Theodore Roosevelt, in town to visit the Wyoming Monument, inspected the Troop and gave a thumbs up.

In 1928, the barracks at Wyoming was renovated. Two floors were added, raising the profile by 25 feet. By 1933, mounted police were reduced to ceremonial duties and crowd control and the state police merged with state highway patrol to form the Pennsylvania Motor Police.

The Wyoming Barracks was headquarters for the Third Motor Police Squadron (B-3) with 200 men serving 11 counties. In 1943, the name was changed to the Pennsylvania State Police. In 1965, Troop B was renamed Troop P.

Though the word ‘troopers” is used here, the men of the force were known as “privates’ until 1956, when the term was replaced by “trooper.”

In 1929, a teletype system was installed at barracks across the state, allowing the state police to communicate with police agencies in 39 states, Canada, Cuba and 135 stations in Pennsylvania cities and boroughs.

In 1955, a driver’s exam course and new garage for 36 cars were built on the barracks’ land in Wyoming. The definition of “barracks” is a living quarters for soldiers. In the past, the Pennsylvania State Police functioned like an army and the troopers lived in the barracks into the 1950s. They had to get permission from commanders to get married and move to private quarters.

In 1965, the old barracks, in use since 1910, was demolished. The new, and now old, barracks was built on the site. It cost $232,000 — 1.9 million in 2021 dollars — but its modern, boxy design angered some neighbors who thought it wasn’t an architectural fit on Wyoming Avenue. The new barracks was dedicated on Aug. 25, 1965, with sleeping quarters on the second floor. Though by then regular Troop P troopers did not live at the barracks, rookies, transfers, visiting brass and troopers working overtime did.

The new $15 million, 55,000-square-foot facility in Hanover Twp. was built on 20 acres of former Earth Conservancy land. The new barracks includes a training center. The old Northeast Training Center on Wyoming Avenue in Forty Fort near the airport has been posted for sale. The fate of the old barracks is controlled by The Department of General Services.