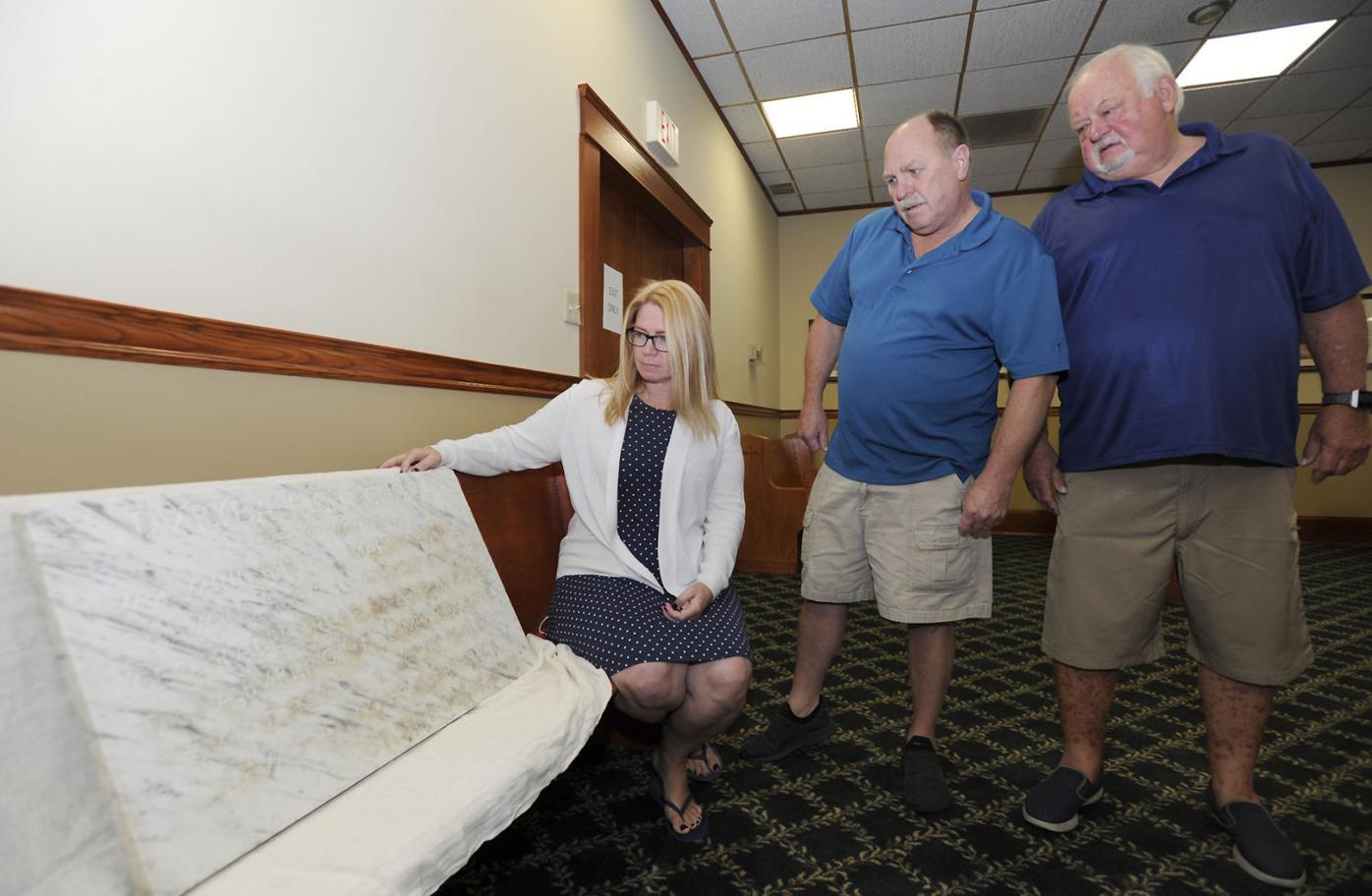 Carolyn Santee, borough manager, and Councilmen John Rowlands and Ed Ameika look over a cornerstone from the former Lincoln school at the Duryea Municipal Building. The borough building is on the site of the former school. 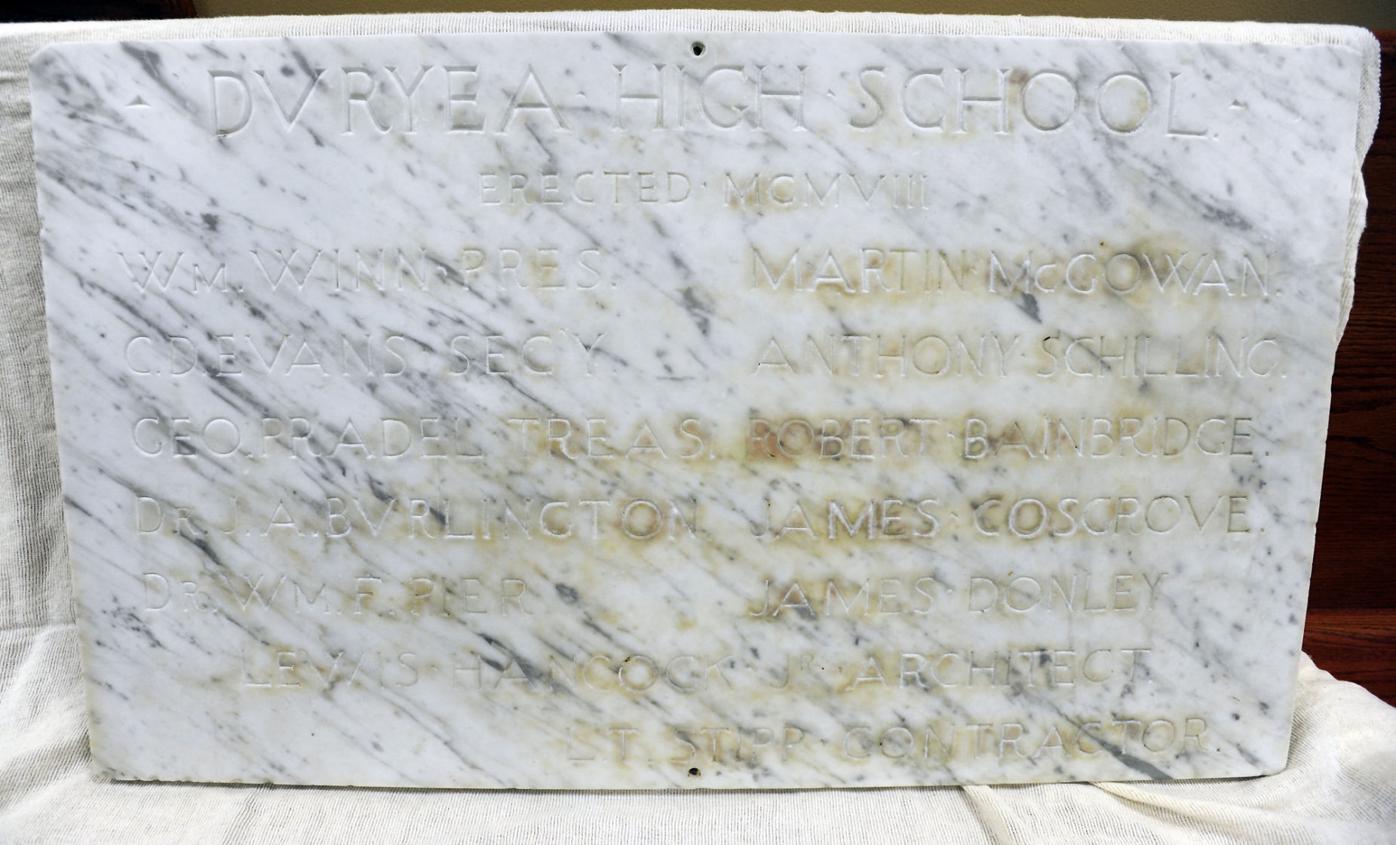 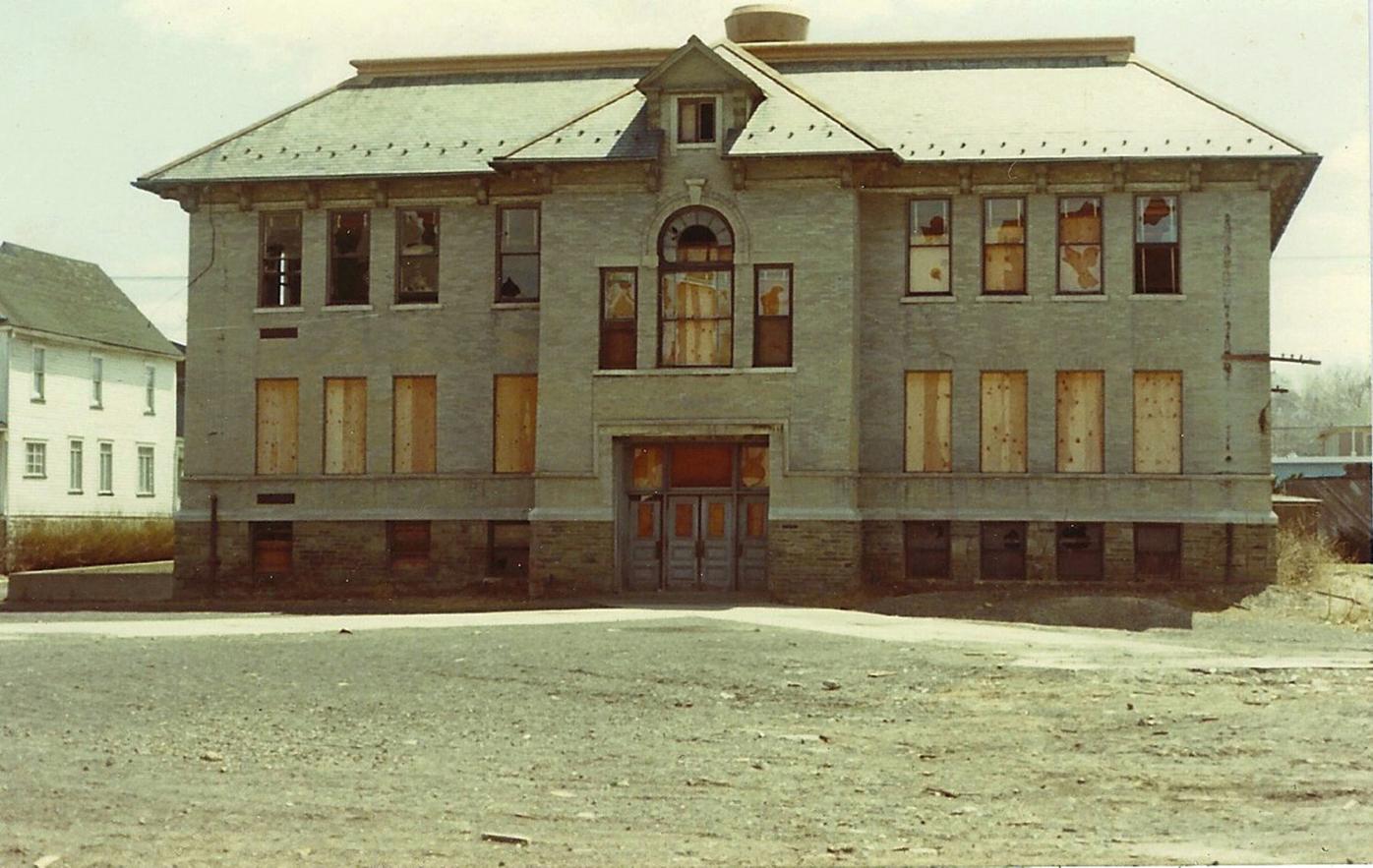 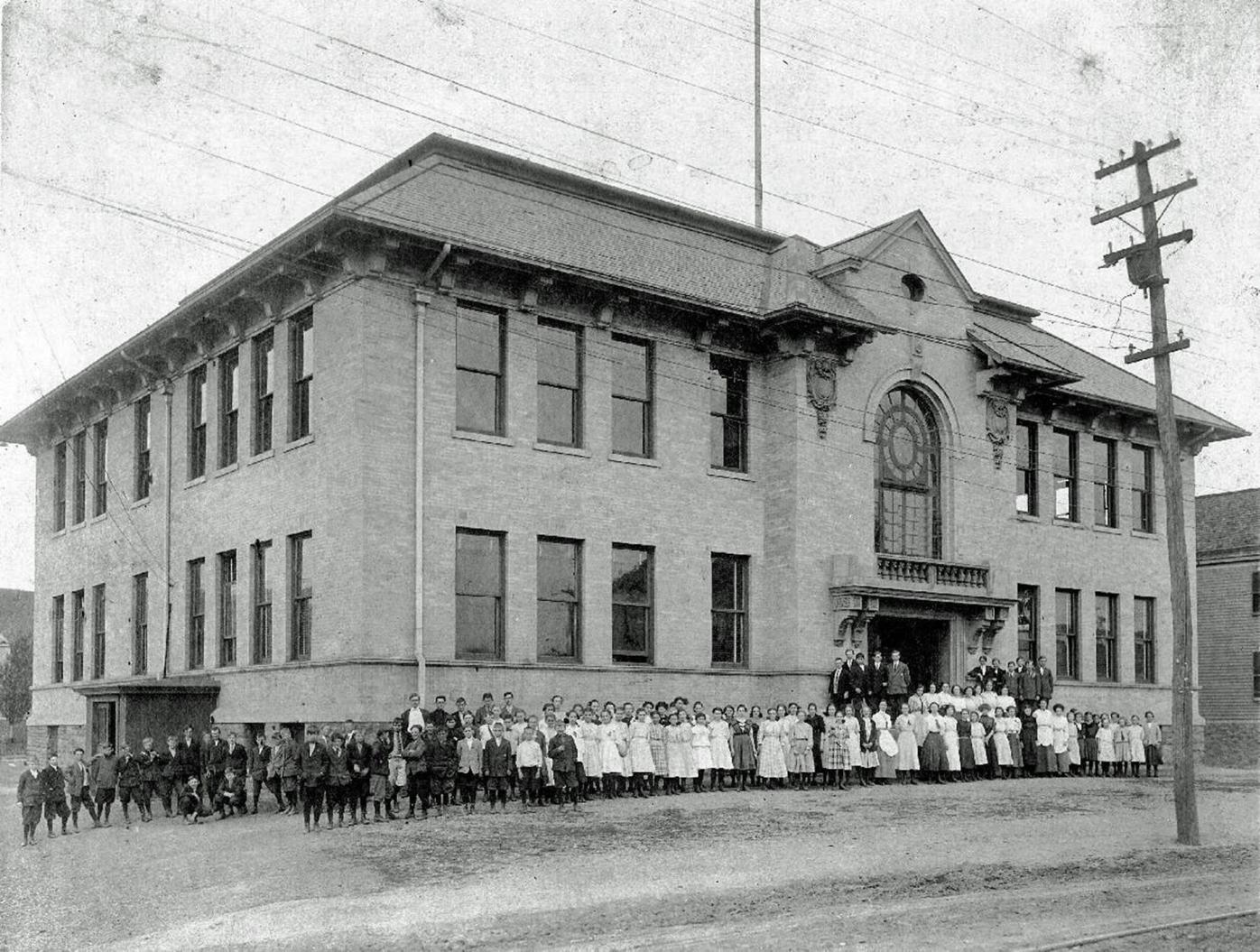 The Lincoln school opened on Main Street, Duryea, in 1909. It was demolished in the early 1980s and the Duryea Municipal Building was later built on the site. The building was used as a high school for Duryea and later as a junior high school for the Northeast School District.

Carolyn Santee, borough manager, and Councilmen John Rowlands and Ed Ameika look over a cornerstone from the former Lincoln school at the Duryea Municipal Building. The borough building is on the site of the former school.

The Lincoln school opened on Main Street, Duryea, in 1909. It was demolished in the early 1980s and the Duryea Municipal Building was later built on the site. The building was used as a high school for Duryea and later as a junior high school for the Northeast School District.

Last month, Christine Pitzer, a 43-year-old elementary teacher from Sparta, New Jersey, found something odd in her front yard — a 30-pound, 2½ foot long marble slab. Carved across the top of the face were the words: “DVRYEA HIGH SCHOOL” above a date in Roman Numerals: “MCMVII.” Below the date were 13 men’s names in two rows.

Pitzer thought to herself what the heck is this thing, who left it here and why? She Googled “DVRYEA” but leaned nothing. A friend of her mother’s asked her Facebook friends for help. One suggested the “V” was probably a “U” based on the old Polish alphabet.

Pitzer googled Duryea and clicked on duryeapa.com, the enormous Duryea history website with over 30,000 photos, records and stories and a half million page views created by Bernie Stiroh, his wife, Allison, and Mike Lizonitz.

Pitzer found Stiroh’s number. When she told him what happened, he knew just what she had, the cornerstone of the old Lincoln school built in 1908 on the west side of Main Street between Lackawanna and Stevenson streets.

“I couldn’t believe it, I had just been thinking about that cornerstone. I hadn’t seen it in 40 years.”

Stiroh found the cornerstone in a storeroom when he toured the Lincoln school before it was demolished in 1981. Stiroh lived in Kinnelon, New Jersey, then, as he does now. He took the cornerstone back to Jersey with him. It wound up with an acquaintance, a New Jersey man named Jim McDowell, who had visions of a cocktail table. Stiroh never saw McDowell again.

“The last I heard, he was moving to Nicaragua,” Stiroh said.

Last month came the call from Pitzer “She had no idea why it was left on her doorstep or who left it,” Stiroh said. And she and Stiroh didn’t know each other and she had never heard of Duryea, Pennsylvania.

“He was so anxious,” Pitzer said in a phone interview. “He wanted to drive through the hurricane to come and get it.”

She persuaded him to wait a day. When he got to Pitzer’s house, the day after Hurricane Isaias passed through, he told Christina a man named Jim McDowell had the plaque 40 years ago and wanted to use it as a tabletop.

Pitzer Googled “Jim McDowell” and found his obituary with his photo and recognized him as a man who lived in her neighborhood. He had died on March 1. She had seen him, but never talked to him and didn’t know his name, but at least part of the mystery was solved. Still unanswered was who left the plaque, why with Pitzer, and why not a call or note of explanation? Turned out when a cousin of McDowell was cleaning out his house, McDowell’s neighbor suggested to the cousin that they give the plaque to Pitzer because, “she was a teacher and would know what to do.” Pitzer had to laugh because the neighbor who made the suggestion also was a teacher.

“It put a little excitement in our lives and I know Bernie was happy,” Pitzer said.

Back in Kinnelon, Stiroh got this email from Pitzer:

“I spoke with Jim’s cousin and she told me she didn’t want to throw it out. Jim’s neighbor suggested giving it to me because I was a teacher. A note would have been helpful because I thought it was for someone else. I’m not sure why she had not told me anything because I often see her walking her dog. I guess she was correct, I did find a home for it. Jim’s cousin said he made it into a table after all. Mystery solved. It was so nice meeting you and I admire your dedication to the Duryea high school community.”

Ground was broken for the Lincoln school in the summer of 1908. It was dedicated on Washington’s birthday in 1909, with 1,000 citizens attending.

Built of light-colored brick, with Nicholson bluestone and Indiana limestone trim, the 80-by-80 building was a modern marvel with steel reinforced concrete foundation, electric fan driven anthracite heat and a dedicated sewer line. There were eight rooms with a cloak room in each, slate boards on two sides, and drinking fountains, which were considered more sanitary because they didn’t require cups.

The school board was sued twice to stop construction, once by a group of taxpayers who said it was too expensive, and by a coal company wanting access to a 6-foot thick vein of coal 100 feet below the school site. The school’s lawyers basically said go ahead and get the coal, the reinforced concrete foundation will hold. The judge couldn’t dispute that logic.

Last week, Stiroh brought the cornerstone to Duryea and gave it to the borough to display at the town hall, completing a full circle. The borough building is on the site of the Lincoln school.

Duryea Councilman Ed Ameika was a freshman at the Lincoln school in the 1964-65 school year.

“It had old wooden floors, wooden desks, huge windows, it was a good school,” Ameika said. “It was well maintained. It didn’t seem old.” Except when the kids would bounce their toes on the floor. Then, “the room would shake and dust would come up from the floor,” Ameika said, laughing at the memory.

“I think it’s a cool thing,” Amieka said of the cornerstone. “It made its journey wherever it was all those years and now it’s back where it started. There’s been some talk of maybe mounting it somehow on the front of the building.”

Stiroh likes the idea of preserving a part of the building at its original site. And, his website is all about preserving the past. He said he is still trying to grow the website and always is looking for historical items.

Anyone with information or any historical items is encouraged to contact duryeasubmissions@gmail.com.