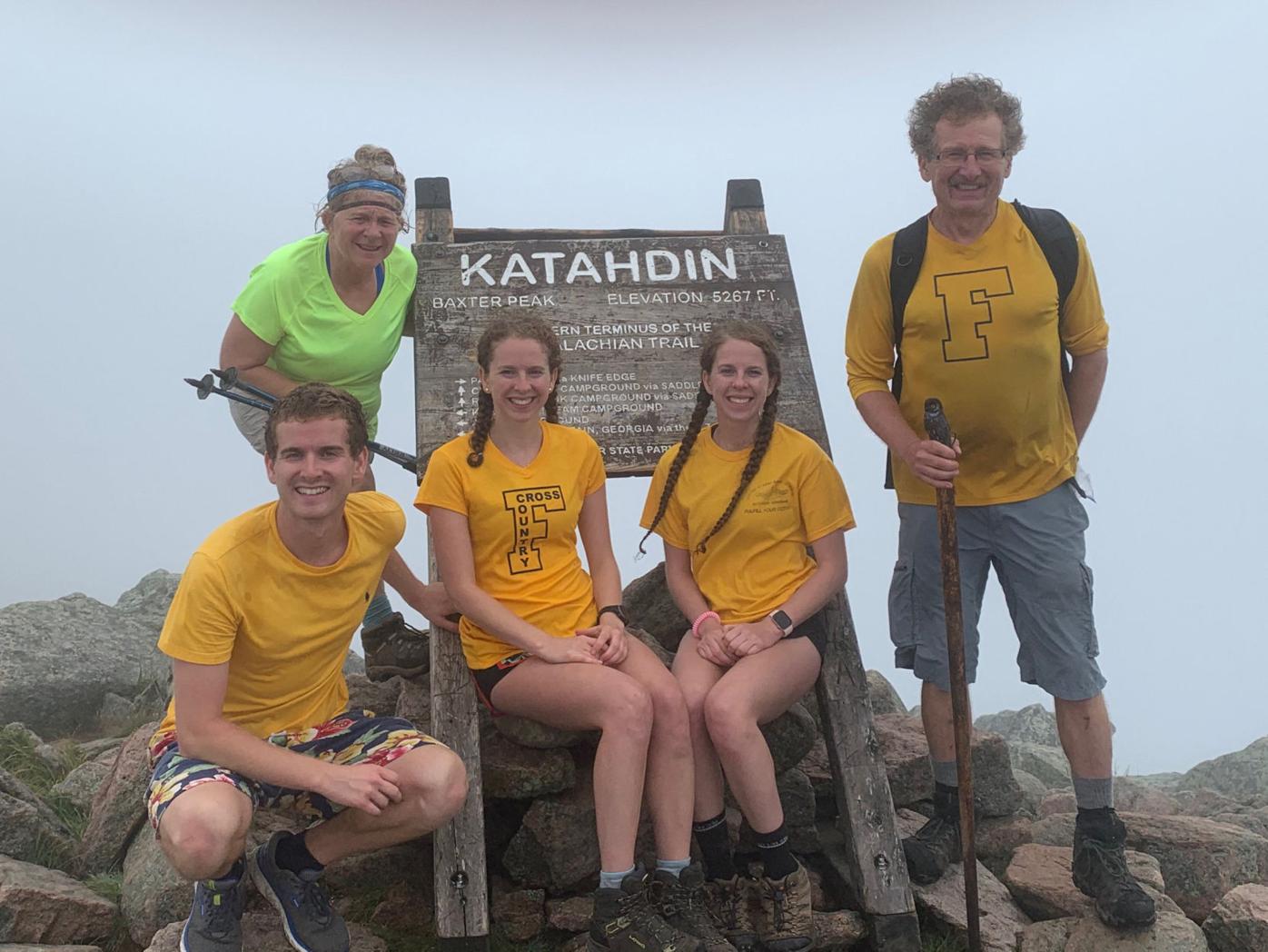 Above, Bob Bugelholl, right, was joined on the trail by members of his family, from left, wife Theresa, son Cory and daughters Kate and Sarah. At right, is Bob Bugelholl using the walking stick his mother gave him 40 years ago, with his mother Rosalie, 82, who hiked a section of the trail with her son. 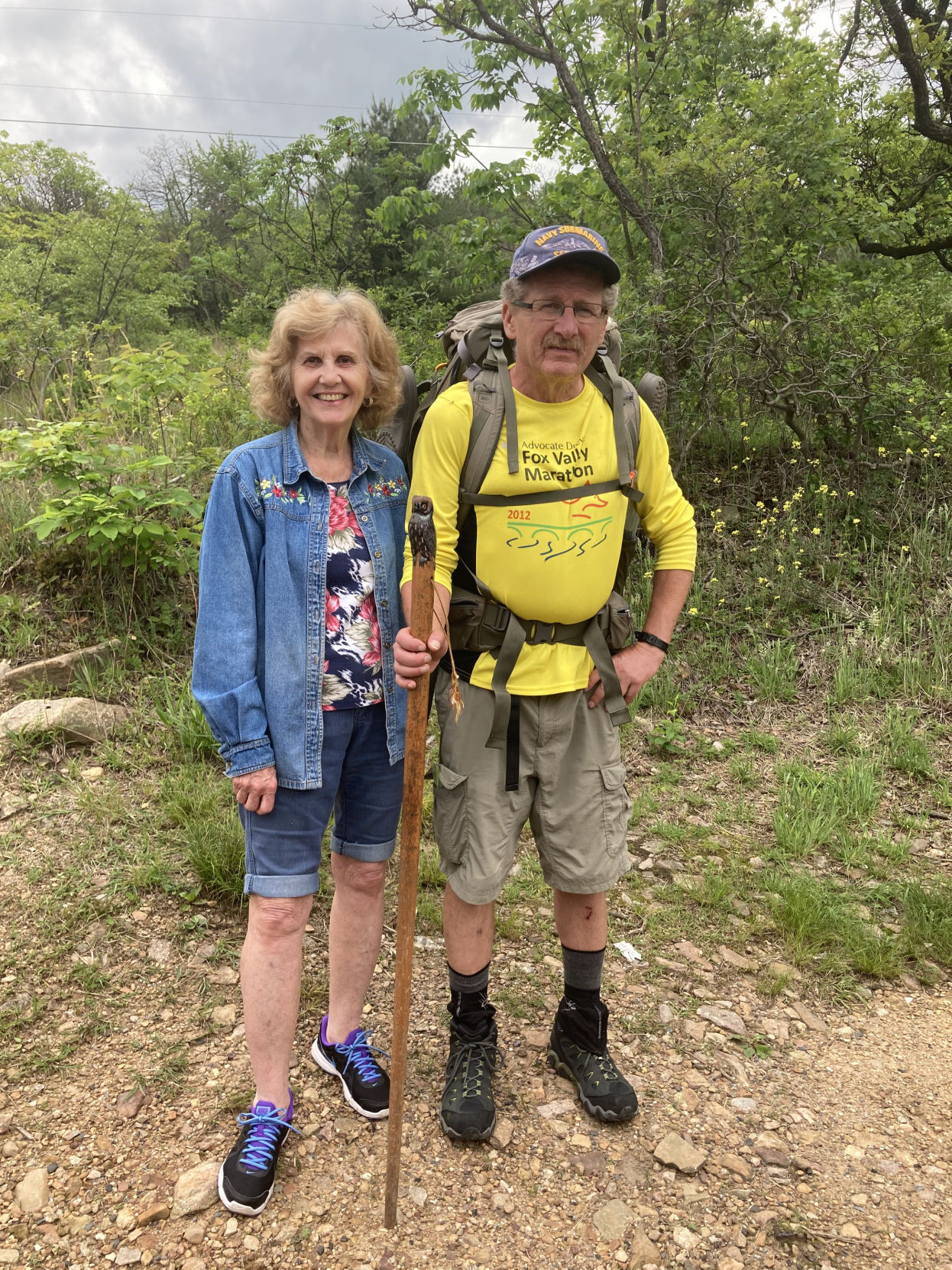 At right, is Bob Bugelholl with mother Rosalie, 82, who hiked a section of the trail with her son, and the walking stick she gave him 40 years ago.

Above, Bob Bugelholl, right, was joined on the trail by members of his family, from left, wife Theresa, son Cory and daughters Kate and Sarah. At right, is Bob Bugelholl using the walking stick his mother gave him 40 years ago, with his mother Rosalie, 82, who hiked a section of the trail with her son.

At right, is Bob Bugelholl with mother Rosalie, 82, who hiked a section of the trail with her son, and the walking stick she gave him 40 years ago.

The Appalachian Trail was Bob Bugelholl’s white whale. He dreamed of hiking the trail before he graduated from Wyoming Area in 1975. He grew up in West Pittston where his mother Rosalie, brothers Dennis and Michael and sister Jacqueline still live. He was inspired to hike the trail by Ed Kuni, whose series of stories about his own Appalachian Trail hike ran in the Sunday Independent in the mid 1970s.

The great adventure would have to wait more than 40 years. Bugelholl planned to hike the trail in 1976, he even bought some gear, but life got in the way — college, six years in the US Navy, a career in the nuclear energy industry and a wife and kids. His Navy hitch included three years aboard a submarine, which led to his trail name, “Yellow Submarine.”

Retired in January and living in Oswego, New York, Bugelholl, now 62, hit the trail on March 7 at the Southern Terminus, Springer Mountain, near Ellijay, Georgia.

It would have been easier 44 years earlier, but in 1976 he wouldn’t have had a wife and three children to support him and start and finish the hike with him. As a regular runner and occasional marathoner, he didn’t worry about his legs, lungs and heart, but he didn’t run marathons with a 30-pound pack on his back, so he worked on his upper body strength for a couple of months before starting the hike.

He carried with him a backpack and a walking stick his mother gave him 40 years ago. His 82-year-old mother met him near Palmerton and hiked a portion of the trail with him. His 30-pound pack held, among other things, a tent, sleeping bag, an extra set of clothes, rain gear, five days of food — freeze dried meals, protein bars, and trail mix — and two quarts of water. His was an average pack.

“It was pretty stripped down,” he said, “A lot of hikers carried 40-pound packs.”

He had a lot of good info, including a trail handbook listing towns, resupply stores, water sources, hostels, shelters and campsites. Appalachian Trail hikers don’t stay out on the trail for the five to seven months, more or less, of a thru-trail hike.

“My longest stretch was eight days. Normally, I’d go four or five days and stop at a town for food, laundry and a shower.”

Though there are three-sided shelters every 10 to 15 miles, hikers typically only used them in bad weather. Most, as Bugelholl did, would pitch an ultralight tent on the ground.

At Springer, Georgia, he was joined by his daughters for two days and wife for three days.

He said he never came close to giving up, though he did find some dicey going in Maine.

“The toughest section was Southern Maine, due to the steep climbs and descents up and down mountains. Thru hikers have actually quit in Maine. The steep climbs punish your leg muscles and the steep descents are hard on your joints, especially your knees,” he said.

The Northern Terminus, Mount Katahdin, features a 4,000-foot climb in 5 miles, with 3,000 feet of it in a mile-and-a half. Another mile through the Mahoosuc Notch, which scrambles over boulders and narrow passages, took three hours. Bugelholl hiked for six days through the 100-mile wilderness in Maine. This is a remote section of the trail with no towns or services readily available. Most of the stream and river crossings in this section are made by fording through water two feet deep.

Weather also was an obstacle.

“There was a lot of bad weather,” he said. “Up until May 17 it was cold and wet. I hiked through snow in North Carolina, Tennessee and Virginia. On May 9, my water bottles froze in Northern Virginia during the day. I did get caught in some severe rain and thunderstorms in Tennessee and Pennsylvania, but normally you watched the weather closely and made it to a shelter before it hit ... In Maine I spent 30 minutes in a cave while a thunderstorm passed.”

Though he hiked over half the 2,190 miles alone, he did buddy with other hikers for 300 miles in New Hampshire and Maine.

“I hiked with guys I met around my age, for safety,” he said.

But his favorite hiking buddies were his wife, daughters and son — Theresa, Kate, Sarah and Cory. They joined him as he neared the end at Baxter State Park in Maine.

“It was special when they finished the hike with me,” he said.

They summited Mount Katahdin on Aug. 3.

The plethora of wildlife along the trail also kept him company.

“The only thing I did not see was a moose,” he said. “(I saw) several bear in Virginia, New Jersey and New York. I was surprised by how fast they can move. The deer were so tame that they would come within 5 feet of you. Dozens of snakes, including rattlesnakes, in Pennsylvania. The most interesting wildlife was the porcupines and an owl in flight in dense foliage. I was impressed with the gracefulness of an owl in flight.”

Having started on March 7, he missed the early COVID restrictions, though he said it was tough to resupply in April.

“Many towns ... had most of their businesses and stores closed. For a month I relied on mail drops from my wife to get resupplied with food. The completion of the hike would not have been possible without my wife’s support.”