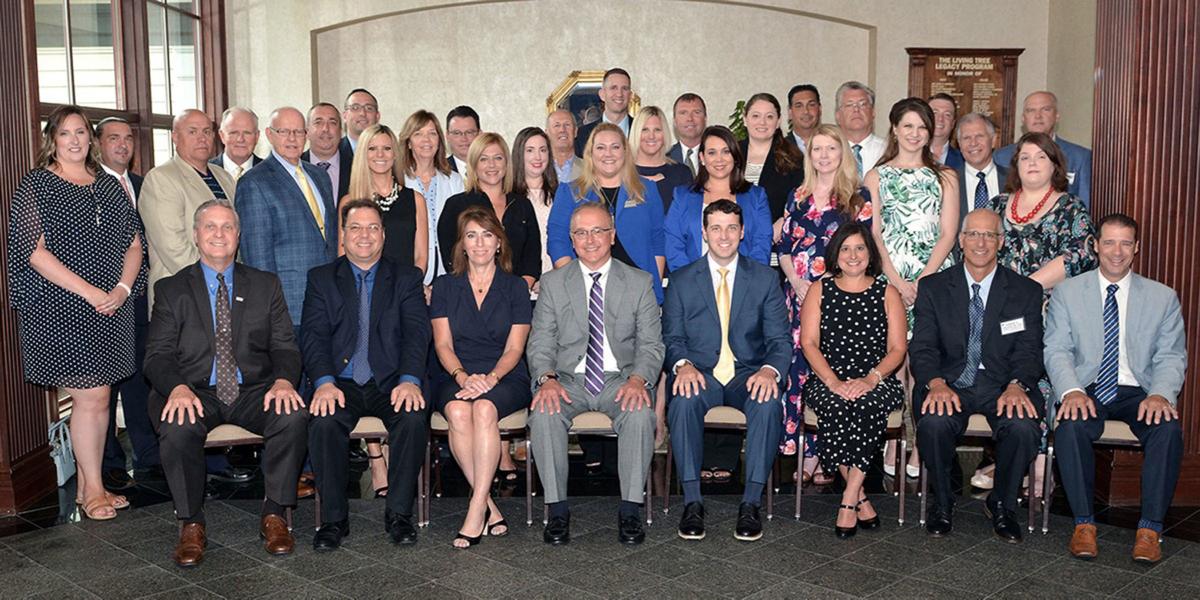 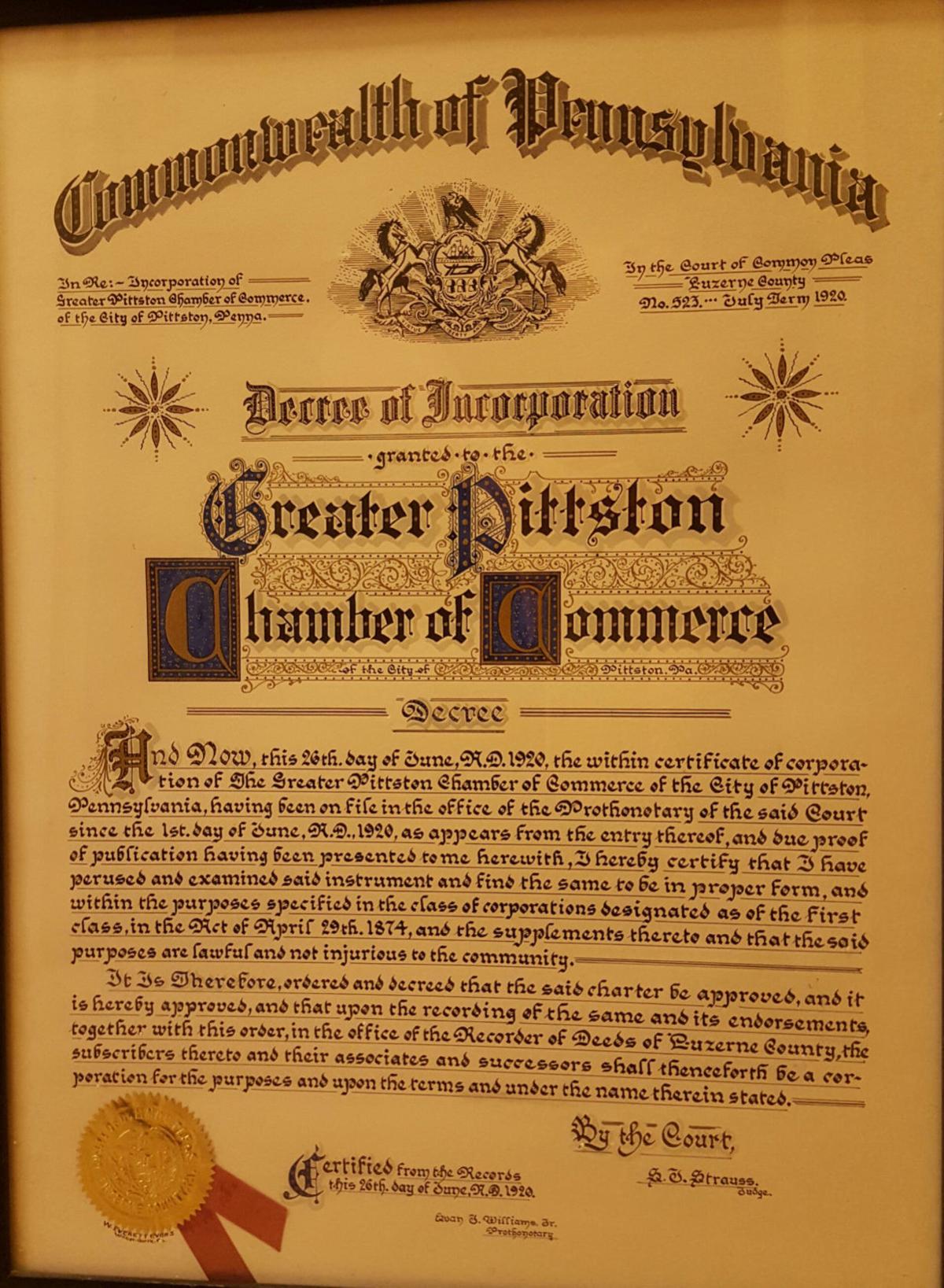 By the time the Greater Pittston Chamber of Commerce has its 100th birthday party, it will be 101. The 100th anniversary party had been scheduled for this weekend, Saturday June 20, but was postponed until next year.

And quite a party it will be. Billed as a 100th anniversary gala, it will live up to the name. An Aviation Technologies hanger at the Wilkes-Barre/Scranton Airport will be transformed into a Prohibition Era bar and restaurant by MCR Designs. The event is chaired by Sandy Insalaco, with music by Sweet Pepper and the Long Hots, beer by Susquehanna Brewing Co. and catering by Jim Guesto of Arturo’s. Chamber Executive Vice President Michelle Mikitish said the choice of Aviation Tech at the airport is “fitting,” since the chamber was a major player in developing the airport.

Mikitish said the chamber is working on a commemorative publication in conjunction with the 100th anniversary. They want it to be more than just a program for the event.

“It will function as a program, but instead of page after page of ‘congratulations chamber on your 100th anniversary.’ Members can use the pages to tell their stories. After all, the chamber wouldn’t exist without its members,” she said.

The Greater Pittston Chamber of Commerce was chartered on June 26, 1920. But by then it had already been operating for six months. The first meeting was in January in Mayor James Kennedy’s office in city hall. The chamber later moved to the Miner’s Bank Building, then to the annex behind the bank and in 1986 into its current building on Kennedy Boulevard.

Housing in the city was the main topic of the first meeting. Chamber members agreed there were not enough homes and flats available to grow the city’s population. The only remedy was for owners of meeting halls and storefronts to lease space as flats. Mayor Kennedy, Joseph Glennon, William Peck and postmaster John Kehoe formed a committee to work on the problem.

At the next meeting, a complaint was made about poor scheduling by the Wilkes-Barre Traction Company and Scranton Railway Company, which met in Old Forge. Women had to wait outside in the cold for 25 minutes to transfer between the two lines. Tom McHugh was asked to communicate with both.

By the end of January 1920, 200 businesses had joined the chamber. Also that first year, the chamber helped mediate and end a strike against the Butler Collieries No. 14 and 16; offered assistance to the city for a street flushing project; sponsored a new survey and map of Pittston; worked with the state forestry department to donate trees to property owners on request; advocated for a new bridge to replace the Ferry Bridge; sent a committee to Harrisburg to meet with state highway commission to discuss new highways for Greater Pittston, opened an employment bureau where citizens could register to be matched with employers, and urged families to buy a bushel of apples for every family member to help farmers move an unusual bumper crop.

In April, the chamber’s inaugural banquet was at YMI Hall. Tickets were $2.50. The secretary of the state chamber was the speaker.

In November, the chamber started a membership campaign with two competing teams, the “Nots” led by JA McAndrew and the “What-Nots” led by W. L. Krise. Memberships were $25 for the mercantile and industrial division and $10 for the agricultural division.

In the 1930s, the chamber, the Pittston Gazette and the American Theater sponsored a Miss Pittston contest to counter, at least for a month, the effect of the Great Depression. Billed as “the Business Stimulation Election,” it worked. Forty merchants served as voting places. Sixty girls received votes. It’s not certain how the votes were tallied but the winner was Alice Robertson of West Pittston, a waitress at the DeLuxe Restaurant at 22 N. Main in the city. She got over 2 million votes and won a trip to New York City and a cruise to Bermuda. Florence Martin was second and won a cruise from Baltimore to Boston. Third place Mary Collins got a trip to Washington, D.C. One merchant called it the best business stimulator he had ever seen.

At the annual dinner in August 1945, it was announced over the past five years the chamber had established 21 new industries, with 3,500 jobs and a $4 million payroll in Greater Pittston. It had been no easy task, considering what the precipitous decline of the anthracite industry had done to the economy in the 1940s.

In the 1950s, the chamber formed the Pittston Area Industrial Development, which issued bonds to build shells and plants to entice new industry. It was this process -—raising money, investing in a building and leasing the building to an employer who would eventually own the building — that the Pennsylvania Industrial Development Authority modeled its first financing program after. This was the precursor to the modern day PIDA loan.

Mikitish said the chamber’s Grimes Industrial Park was named for Jack Grimes with good reason. He was a persuasive guy. He almost single-handedly convinced the German firm SCHOTT to build in Duryea.

“They shook hands,” Mikitish said, “and a couple days later they were breaking ground.”

Over the years, the chamber — serving directly, and indirectly as an idea incubator — has been a major player in the Scranton/Wilkes-Barre Airport, housing developments Highland Hills and Blueberry Hills, Commerce Road and Navy Way, CenterPoint East and West Commerce Trade Parks, and the establishment and retention of businesses such as Keystone Automotive, Pride Mobility, Topps, Independent Graphics, and Interstate Aluminum, to name just a few. Approximately 5,000 jobs have been created in the past decade.

Mikitish said the underlying focus of the chamber has always been, “To put people to work.”