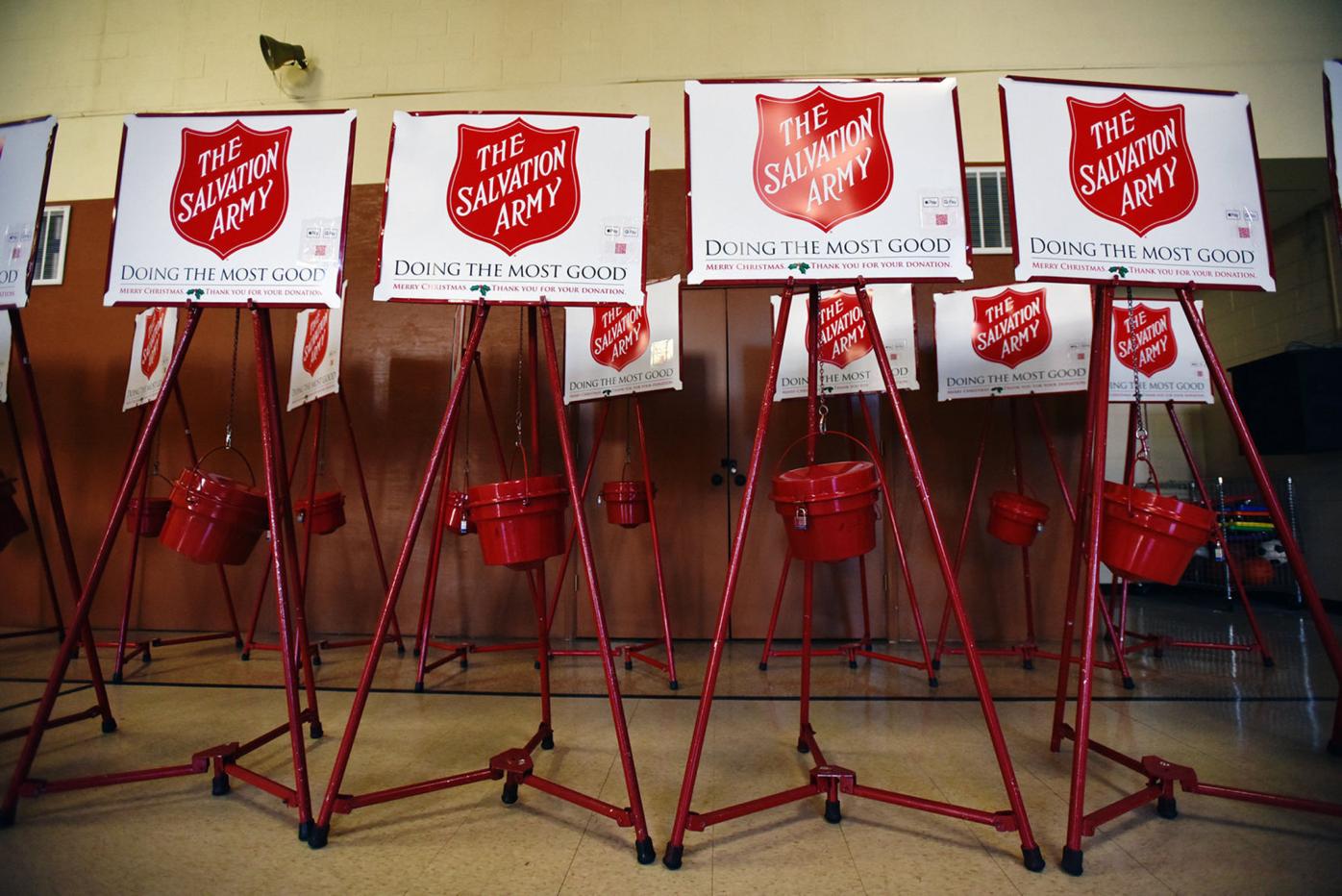 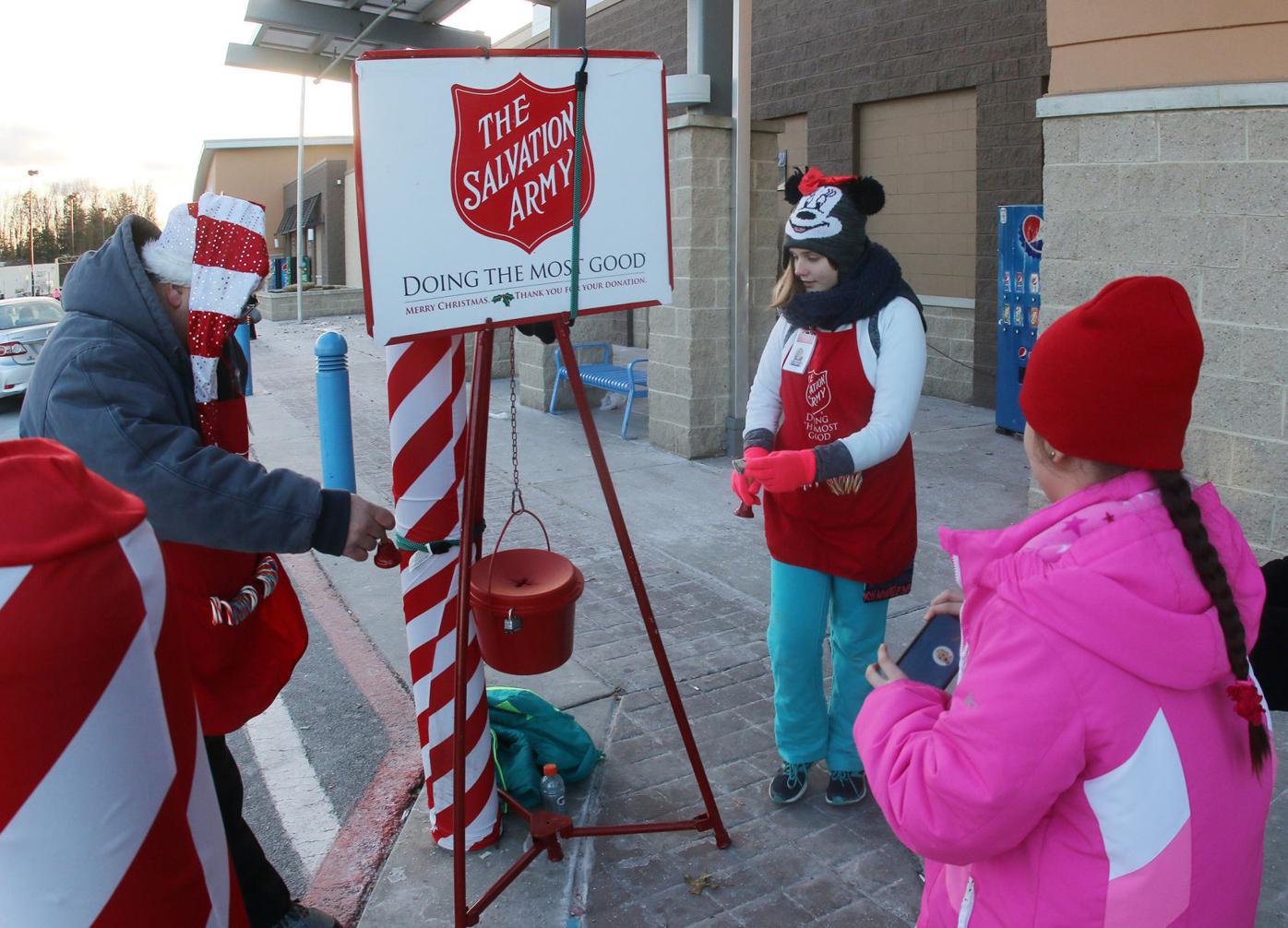 Chris and Haley Winburn man the Salvation Army kettle outside of the Walmart in Pittston Twp. as Evelyn Bentler walks up to donate.

Chris and Haley Winburn man the Salvation Army kettle outside of the Walmart in Pittston Twp. as Evelyn Bentler walks up to donate.

In February 1912, a trio of Salvationists from Tunkhannock — Captain and his wife D.D. Thomas and Lieutenant Pearl Summers — moved to Franklin Street in West Pittston and rented Booth’s Hall on the third floor of 53 S. Main St. in Pittston, planting a Salvation Army post in the Pittston area for the first time. That 120-year history in Greater Pittston ends July 1 when the West Pittston Salvation Army is absorbed into the Wilkes-Barre Salvation Army Corps.

In 1900, the Wilkes-Barre Corps began a camping tradition at Orcutt’s Grove near Noxen. Many of the campers came from Tunkhannock. The Salvation Army established a post in Tunkhannock in 1904. They held services nightly at the Evangelical Church and lived in a barracks on Slocum Street. Within a few weeks they had converted 60 people to Christianity, 26 of whom enrolled in the Salvation Army, which is a non-denominational evangelical organization.

An open air meeting in April 1906 at the intersection of Tioga and Bridge streets attracted a large crowd. That evening the Tunkhannock commander Ensign Urban called a special meeting at the Evangelical Church. Urban spoke on the rescue work of the Salvation Army, saying by charging 10 cents admission he “hoped to clear the opening debt.”

Following the Salvation Army’s mission, Urban held services at the jail and brought food on visits to poor homes. In September 1904, the Tunkhannock post had its first Harvest Home Festival, a world-wide Salvation Army tradition. Urban hoped to raise $100 at the festival, half for the national organization.

When the Tunkhannock trio established a post in the Pittston area in 1912, the Tunkhannock location was kept open as an outpost. The first official meeting in Pittston was on Leap Day, Thursday evening, Feb. 29, 1912, but that afternoon the Salvation Army had an open air event at Broad and Main streets with speakers, singing and a band.

As Salvationists did all over the world, the men and women of the local post visited homes, distributing clothes, shoes, money and food. They found beds for the homeless, found jobs for the destitute and visited the sick.

In May 1912, they started a Sunday school and Sunday service, held meetings on Tuesdays, Wednesdays and Fridays in Trevor Hall on Fremont Street in West Pittston and continued to meet at Booth’s on Main Street, Pittston, on Thursday, Saturday and Sunday nights.

The founder and leader of the Salvation Army, Englishman General William Booth, died in 1912. Capt. Thomas of the West Pittston post conducted a memorial service for him in Trevor Hall on Sept. 1.

The first Santa Claus chimney campaign in 1912, now the Red Kettle Campaign, raised money and used toys for 300 families. The next year the local post joined the Harvest Home Festival tradition, kicking off with a parade from the Pittston YMCA to the Trevor Hall grounds.

In 1916, a lease for Trevor Hall, then 10 years old and built for settlement workers, was transferred to the local Salvation Army post from the Baptist Mission Society. The concrete frame building was on a lot 150 feet deep with 40-foot frontage on Fremont Street. The property had a playground of sandboxes, swings, slides, may-pole, see saw and volleyball court, and was owned by the Clear Spring Colliery. The first floor was the post’s service center and the large basement was headquarters of the post’s youth group, the Life Saving Scouts.

In 1928, Cold Spring deeded the Fremont building and land to the Salvation Army. On Dec. 22, 1947, fire destroyed the Fremont Street post. Luckily, no one was there. Renovations were underway and workmen had just left for the day.

Less than a year later, a steel frame for a new headquarters on Luzerne Avenue, West Pittston, was in place. The building opened in 1949. It served the post until last year, when it was deemed structurally unsafe, the end of a deterioration exacerbated by the flood of 2011, when 8 feet of sewer backup filled the basement. The building was demolished last month.

The post moved to 443 N. Main St. in Pittston — which was used in the past for toy storage for its Christmas programs — to continue its church services, food distributions and other events. That ends July 1 when the post is officially absorbed by the Wilkes-Barre post.

Another problem he said is many of the board members were aged and retired.

“We lost a lot of movers and shakers from the board,” he noted.

“A lot of people didn’t even know we were there,” he said.

He said at one time they could have acquired St. Joseph’s Church in Inkerman, now Baloga’s Funeral Home, for $75,000, but it didn’t happen. That would have given the exposure Grieco believes might have helped a Pittston area post stay viable.

Grieco said despite money troubles, the West Pittston post tried hard to live up to the mission, even during the 2011 flood which destroyed the kitchen. The post managed to serve hot meals sent from Wilkes-Barre and they handed out sandwiches and cleaning materials to residents.

Grieco said fundraising options were limited to purse auctions and spaghetti dinners because gambling was not allowed.

For Christmas 2019, they handed out toys and served hot chocolate from the Main Street site and gave out vouchers for Christmas turkeys, which were distributed from a refrigerated truck courtesy of Blue Ribbon Dairy.

Grieco said his affection for the Salvation Army goes way back, and he’s sad to see the Pittston area post go. His wife had 13 siblings and after their father was injured in a mine accident, her mother would always say they wouldn’t have Christmas without the Salvation Army.