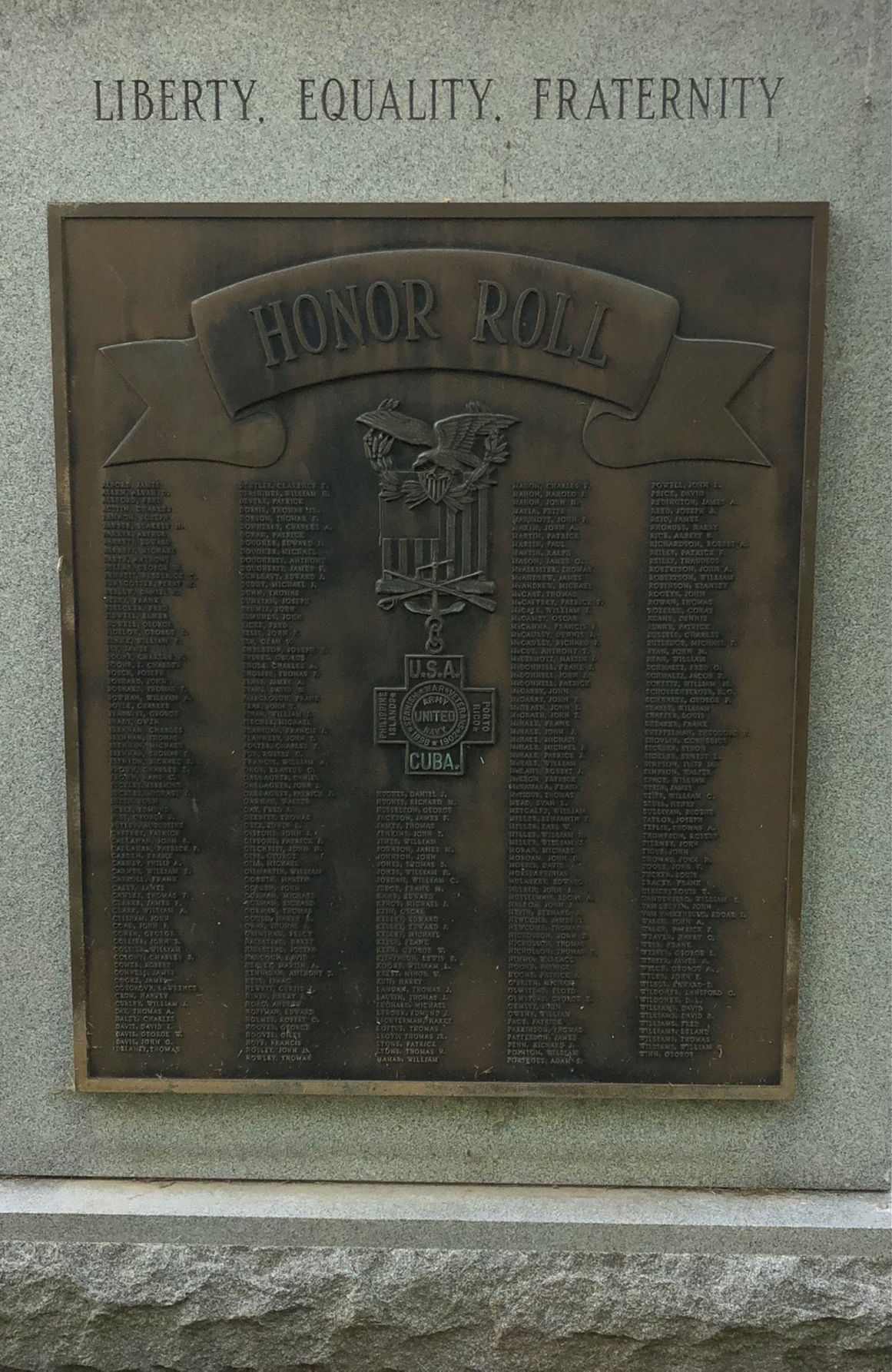 The Spanish-American War monument at the former armory in West Pittston. 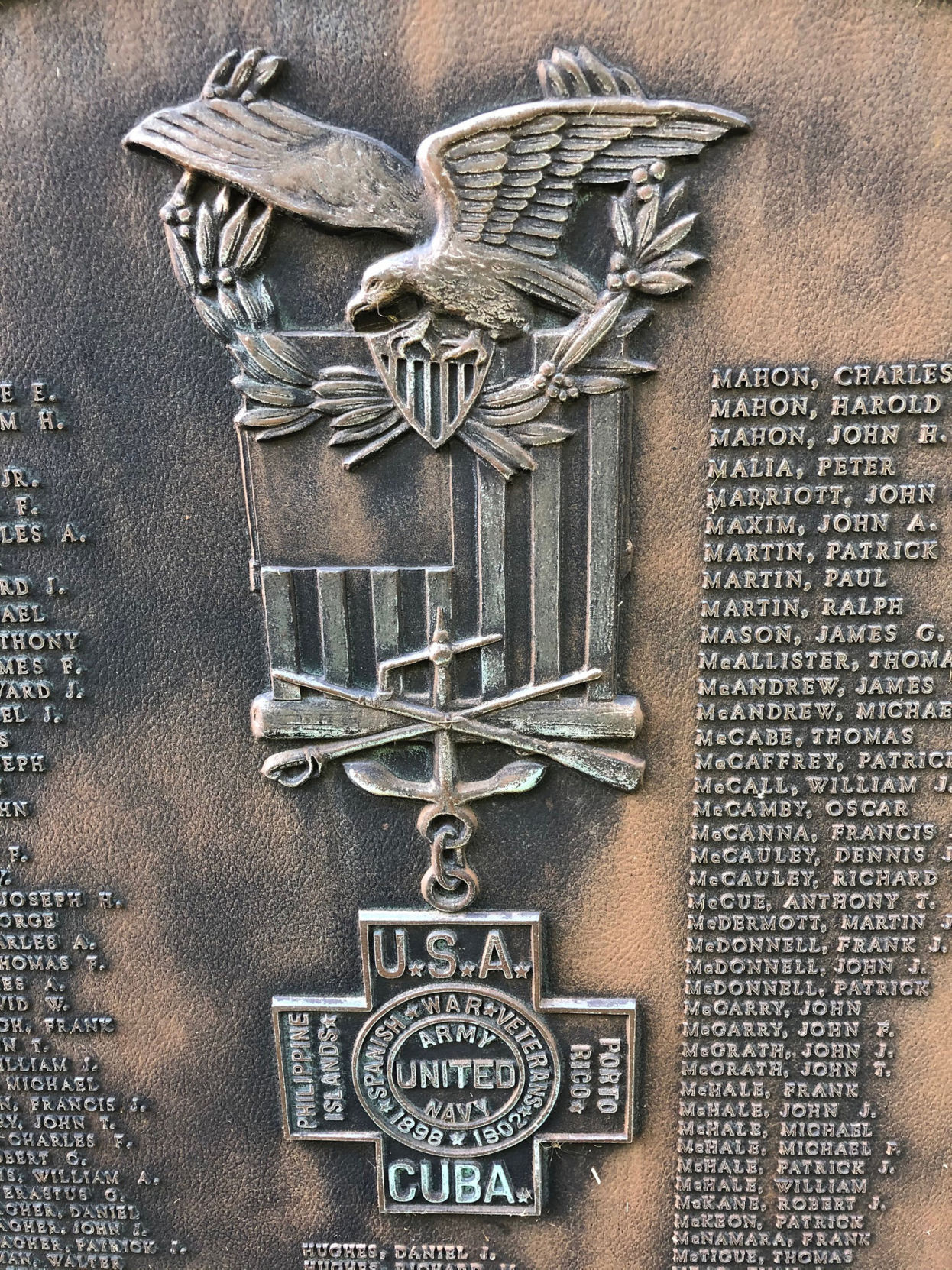 The art work included with the names of fallen soldiers in the Spanish-American War monument at the former armory in West Pittston. 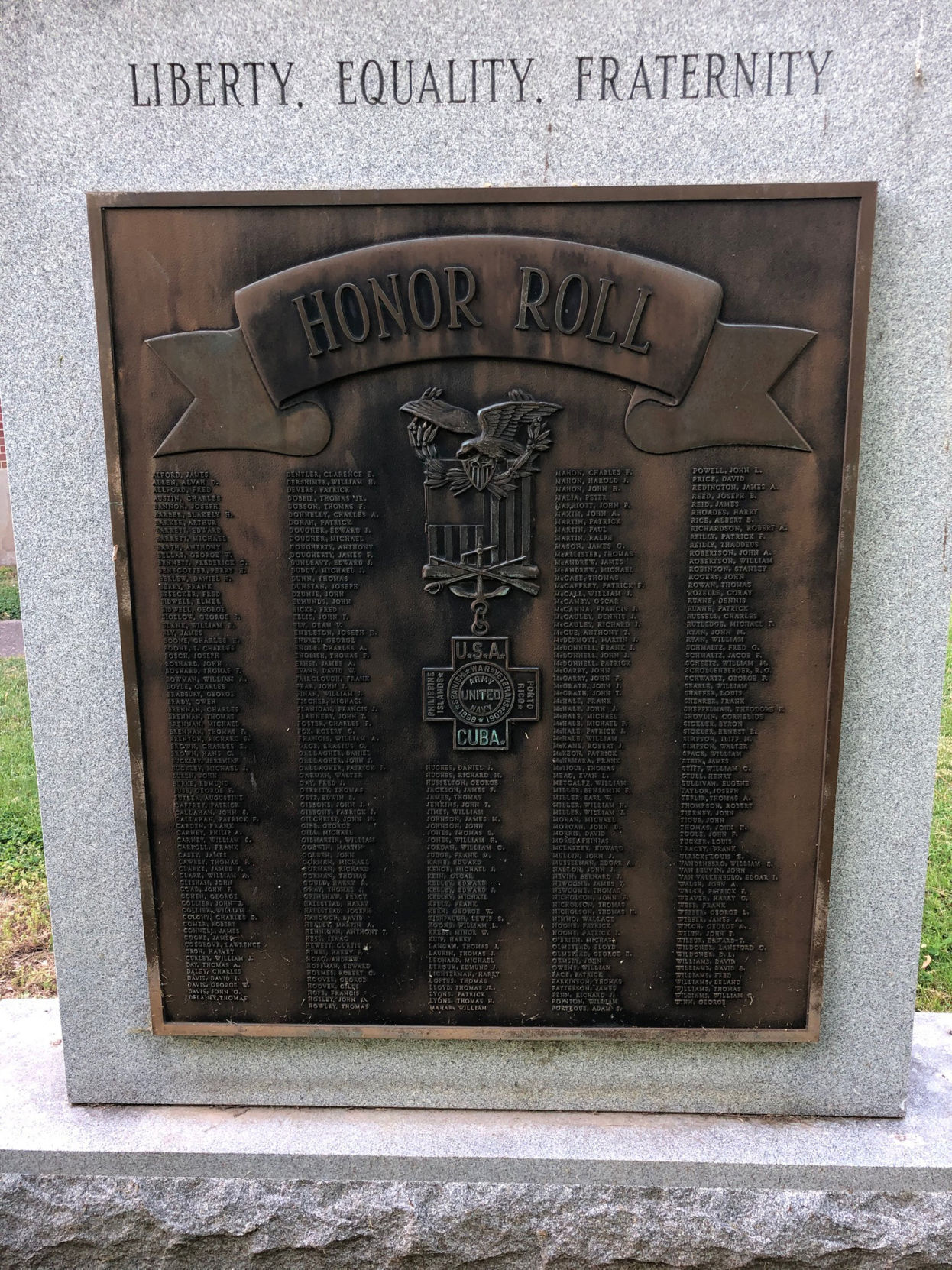 At left, a Spanish-American War monument is located on the grounds of the former Pennsylvania National Guard Armory in West Pittston. Above is a close-up of the design on the monument.

The Spanish-American War monument at the former armory in West Pittston.

The art work included with the names of fallen soldiers in the Spanish-American War monument at the former armory in West Pittston.

At left, a Spanish-American War monument is located on the grounds of the former Pennsylvania National Guard Armory in West Pittston. Above is a close-up of the design on the monument.

On Wednesday, April 27, 1898 hundreds of Greater Pittston citizens decked out their homes and businesses with flags and buntings. Thousands of citizens lined the main streets and the Water Street Bridge to watch 25 Civil War veterans and the Leak Cornet Band lead a march of soldiers to the Lehigh Valley Station, where they boarded for the first leg of their call to the Spanish-American War.

Today the Spanish-American War is the forgotten stepchild of America’s declared wars, but in April 1898, it was forefront in the minds of Greater Pittston men of National Guard Companies C and H, who, as they did for every call to arms, volunteered in mass to serve.

As it would turn out only four men from Greater Pittston saw combat action, fighting the Spanish in Cuba. Charles Foster, a signal corpsman of York Avenue in West Pittston, was one of the four. He was repairing telegraph lines. In a letter home dated Aug. 10, 1898, which was excerpted in the Pittston Gazette, he wrote: “So far I enjoyed fighting the Spanish very much. Yesterday the Fourth Ohio Regiment entertained the Spaniards for an hour and lost eight men, but drove the Dons nine miles back.” And: “Fruit here is dirt cheap. Oranges, the very best, are 5 cents a dozen. Tobacco, the finest in the world, is all you want for a song.”

From a second letter: “Since I last wrote I have had considerable fun. I went through one battle and one skirmish and the Spaniards never touched me.”

It may seem strange to see war described as fun and entertaining, but compared to what Pittston Companies C and H were going through in Camp Thomas at Chickamauga, Georgia, it may have been. Conditions there were primitive. Though they did eat well, men slept on the ground, four to six to a tent. Their uniforms were described as “rags and tatters.” Water had to be carried and boiled. They drank it warm because they were so thirsty. The temperatures were high 90s to low 100s. Typhoid fever sickened hundreds of men and killed at least nine, including two Pittston men, John J. Hosley, a carpenter who boarded with the King family at Main and Parsonage streets, and Charles Gilmartin, who died on his 26th birthday on July 2, near where his grandfather had been killed in the Civil War. Hosley, whose only relative was a brother in Troy, New York, was buried in the camp cemetery. Gilmartin, a miner, was the son of Charles Gilmartin described as “one of Pittston’s oldest and best known residents.” Gilmartin was brought home and buried in what was then called the Market Street Cemetery, now St. John’s.

On the homefront, the Pennsylvania Coal Company took part in a National Day of Colors. Gun salutes, singing, and speeches entertained under a 12-by-20-foot flag on the tower of the No. 1 shaft. Of the No. 8 breaker. A dozen girls dressed in red, white and blue did a drill carrying Cuban flags.

On Sept. 2, a special train of Pullman cars brought the sick soldiers home. Twenty were dropped in Wilkes-Barre and six in Pittston, four of them were taken to the Pittston Hospital. On Sept. 19, the rest of the men of Companies C and H arrived at the Lehigh Valley Station at 2 a.m. after 145 days in camp. Several hundred citizens greeted them.

The Spanish-American War began after the explosion of USS Maine in Havana Harbor in Cuba, leading to U.S. intervention in the Cuban War of Independence. It lasted from April 21 to Dec. 10, 1898, with fighting in Cuba, Puerto Rico, the Caribbean Sea, Guam and the Philippines.

After the war, Pittston men formed Camp No. 17 of the United Spanish War Veterans. The camp was active, participating in Memorial Day celebrations into the 1950s. As their ranks dwindled an honor role was erected in front of the First Baptist Church on Water Street in 1943, paid for by John Kehoe in memory of his brother. a Spanish War vet.

Thomas Dobbie, the commander of Pittston camp No. 17, died in 1955 at 77. He was born in Scotland. By 1960 three were still living: Walter Garman and Charles Austin of West Pittston both 83 and Thomas Boshard, Pittston, 79. Garman died in 1966, Austin in ’67, leaving Boshard as the last living Greater Pittston Spanish War veteran. He died in July 1969. He was carried to and from Mass at St. Mary’s Help of Christians by active members of the National Guard in uniform

In 1978 the Spanish War memorial site was moved to West Pittston and a new memorial was erected in front of the Armory where it still stands. Built of Vermont granite mounted with a bronze tablet it cost $5,561 ($22,000 2021 dollars). West Pittston Mayor Merle Bainbridge was the treasurer of the fund which raised the money through donations.

The plaque is weathered and its fate is unknown. The National Guard moved out. The building is owned by the state. A plan to have the Fish and Boat Commission move in seems to have fizzled out.

The Spanish War memorial has never been the site of a Memorial Day ceremony. Perhaps it’s time for a small ceremony there to remember the Greater Pittston Men who served and the two who lost their lives.

Sources: digital archives of the Pittston Gazette and Wilkes-Barre Times