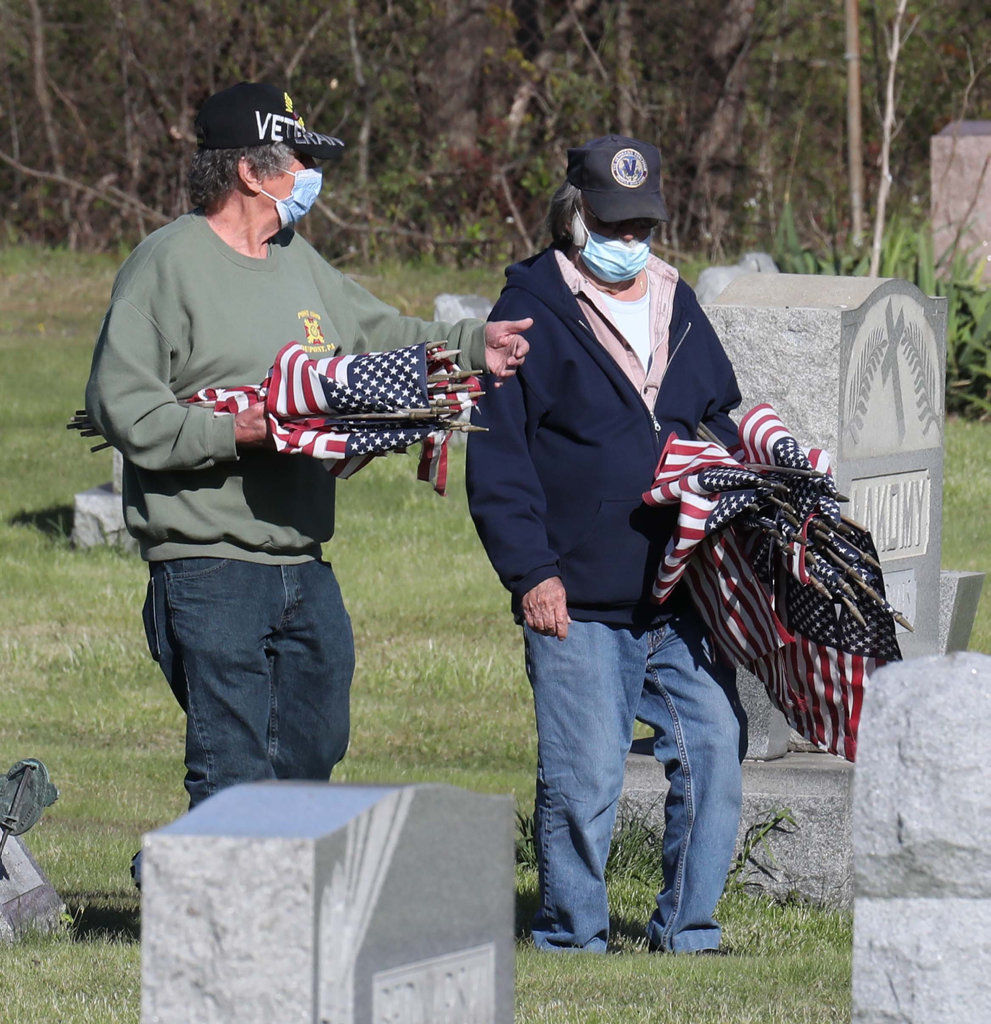 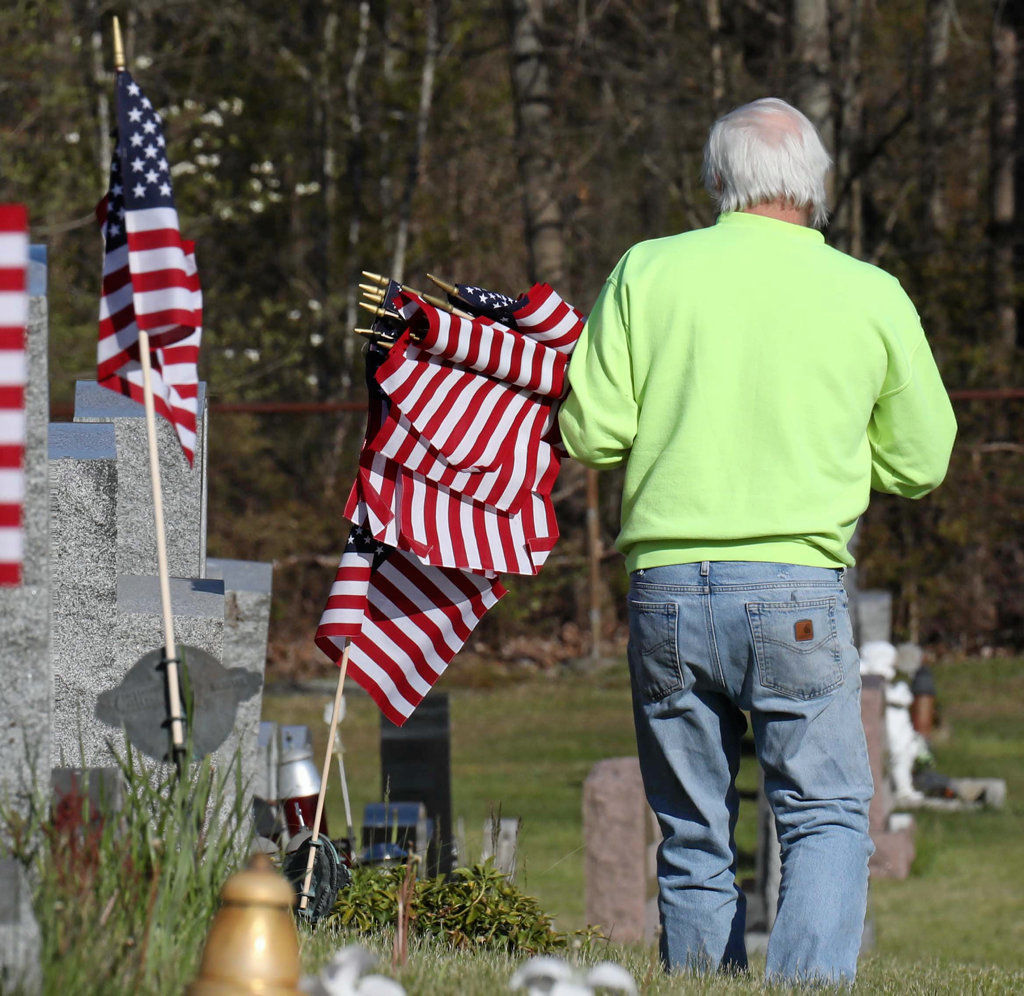 Though women in Southern states had been decorating graves of Civil War soldiers — Rebel and Yankee — with flowers even before the war ended in 1865, the first official commemoration of the Civil War dead was at Arlington National Cemetery on May 30, 1868. It was called Decoration Day.

Decoration Day went nationwide the next year, when the Grand Army of the Republic national organization suggested GAR posts around the country designate May 30 as a day to "commemorate the glorious deeds of their departed comrades," with each post free to plan its own event. The GAR was a fraternal organization formed by veterans of the Union Army, Navy and Marines.

In Pittston, GAR Nugent Post 245 Commander Gen. Logan told the Pittston Gazette, "The post cordially invites patriotic men and women to co-operate with the several posts in strewing flowers over the graves of our departed heroes."

The first organized parades were held in the early 1870s. Town offices and schools closed so workers and school kids could march. In 1872, businesses in Pittston and West Pittston closed at noon.

The 1870s parades were enormous. The 1874 parade, wrote the Gazette, was to be "The best yet and will be remembered." The tollhouses on the bridges between Pittston and West Pittston were dropoff points for donations. Committees were appointed to handle flowers, speakers and carriages.

The parade formed at William and Main streets with the Cadet Drum Corps in the lead and the Pittston Silver Cornet band and hundreds of citizens bearing flowers in the rear, with hose companies, bands, GAR posts, the McClellan Rifles, societies, Knights and carriages of clergy in between.

They marched and rode to the Odd Fellows Cemetery in Pittston and then to the West Pittston Cemetery — described as being "most beautifully located on the river bank opposite Carpenters Island," — where choirs, bands and orators waited and where scores of children helped strew thousands of flowers — bouquets, wreaths and loose — on the graves of men killed in the Civil War.

The gatekeeper at the Water Street Bridge was scolded by the Gazette because "he wouldn't let the urchins who followed the parade past the gate."

Over the next couple decades, outlying towns organized parades to their cemeteries, and rifle salutes, grand oratory and Lincoln's Gettysburg Address recitations became traditions. In 1902, the Pittston Glee Club recited the Gettysburg Address.

In 1904, the circus came to town — to parade, not to perform. The Walter L. Main Circus train stopped at the Cork Lane D&amp;H station early on Decoration Day. Thousands lined Main Street to watch, "four dromedaries drawing a large den of animals, elephants, baby camels, hybrid tigers, black tigers." They also saw a clown on a bull and a hobo on a bike doing "amusing stunts." The circus performed that night in Wilkes-Barre.

Decoration Day became something more than a solemn commemoration of war dead. Though May 30 remained the official date until congress made it the last Monday in May to create a three-day weekend in 1971, long before 1971, the nearest weekend became days for parties, dinners, outings and sales. One Pittston store advertised "parasols imported from Japan, variety of colors and designs with tassels at the end of every rib." From another, "Wear a new suit for today and pay later."

Outings to Lake Winola were popular among young people in Pittston. Beginning in 1906, the Lehigh Valley Railroad ran Decoration Day excursions to Mauch Chunk and Lake Carey. The DL&amp;W offered trips to Niagara Falls leaving Pittston on the 29th and retuning on the 31st for $6.55. In 1908, 22 young people from West Pittston rode over Bear Creek Boulevard in a bandwagon pulled by four decorated horses.

In 1904, the Laurel Line built Valley View Park in Inkerman, Jenkins Twp., on land leased from the Pennsylvania Coal Company. When it opened it was a picnic grounds with a dance pavilion. The Catholic Total Abstinence Union had Memorial Day events there with picnics, baseball games and music. In 1910, Alexander's Band drew a standing ovation for William Tell's Overture.

By the late 1910s and into the 1920s, Decoration Day events looked a lot like what we call Memorial Day events today, only much, much bigger. In 1915, the Polish Falcons took over Valley View Park for Memorial Day, setting up hundreds of tents. More than 300 priests took part in an open air Mass.

Memorial Day weekend in 1922 was filled with happenings. On the morning a of May 30, a parade of Spanish-American and World War I vets marched from the Armory to the Junction to dedicate Gilmartin Park to Sergeant Thomas Gilmartin, who was killed in France during WWI. Two 12-by-25-foot silk flags were raised by Civil War vet Samuel Davis. That same day, more than 20,000 attended the Memorial Day Lithuanian Day picnic at Valley View Park. Meanwhile the San Cataldo Society ran a mammoth carnival on its Oak Street plot from May 26-29 with rides, games, dancing and fireworks. In 1929, hundreds of Greater Pittston people hopped the Laurel Line to Rocky Glen, where the Planters Nut Orchestra played for dancing at the new pavilion.

While GAR posts had been founded by Civil War veterans who were the leaders of Decoration Day commemorations, by the 1910s their ranks were dwindling. The Nugent and West Pittston posts were disbanded and Memorial Day became a day to honor veterans from other wars, such as the Spanish-American War of 1898 and, after 1918, WWI.

By 1927 there were more than 400 Civil War graves in the Pittston, Jewish, Brick Church, Market Street, Church Hill, West Pittston, Jenkins, Mount Zion, Baldwin, Hamtown and Browns cemeteries. Only 17 men from the Nugent, West Pittston and Wyoming GAR posts were known to be alive. The last two, Charles Linskill, 92, and Luther Wildoner, 94, died in 1932 and 1935.

Linskill was a member of Reilly Post in Wyoming and chaplain of Conyngham Post 97. He died in his home on Monument Avenue in Wyoming. Linskill may have been the last surviving Civil War veteran who was a Greater Pittston native, but two Civil War vets who were not natives, but were living here when they died, outlived him, Wildoner being one. He was from Berwick and enlisted from there, but spent the later years of his life living in West Pittston with his son. He was the last surviving member of the local GAR posts. He had been at Appomattox when General Lee surrendered to General Grant. He was said to be a direct descendent of General Lafayette, while his first wife was the great-granddaughter of the sister of Revolutionary War hero Nathan Hale. For decades, Wildoner was known for his recitations of the Gettysburg Address at Wyoming Memorial Day commemorations.

In 1937, Leander Simonson died in Pittston at 92. From Monroe County, he enlisted in Company F of the 203th infantry regiment in Scranton in 1863. He moved to Pittston to live with a granddaughter., having outlived his nine children. He is buried in Pittston Cemetery. In 1942, Edwin Harrington died in his home on Kenley Street in Hughestown he was 98. A native of Grand Gorge, New York, he lived most of his post-war life in Greater Pittston and was the last Union soldier living here to pass away.