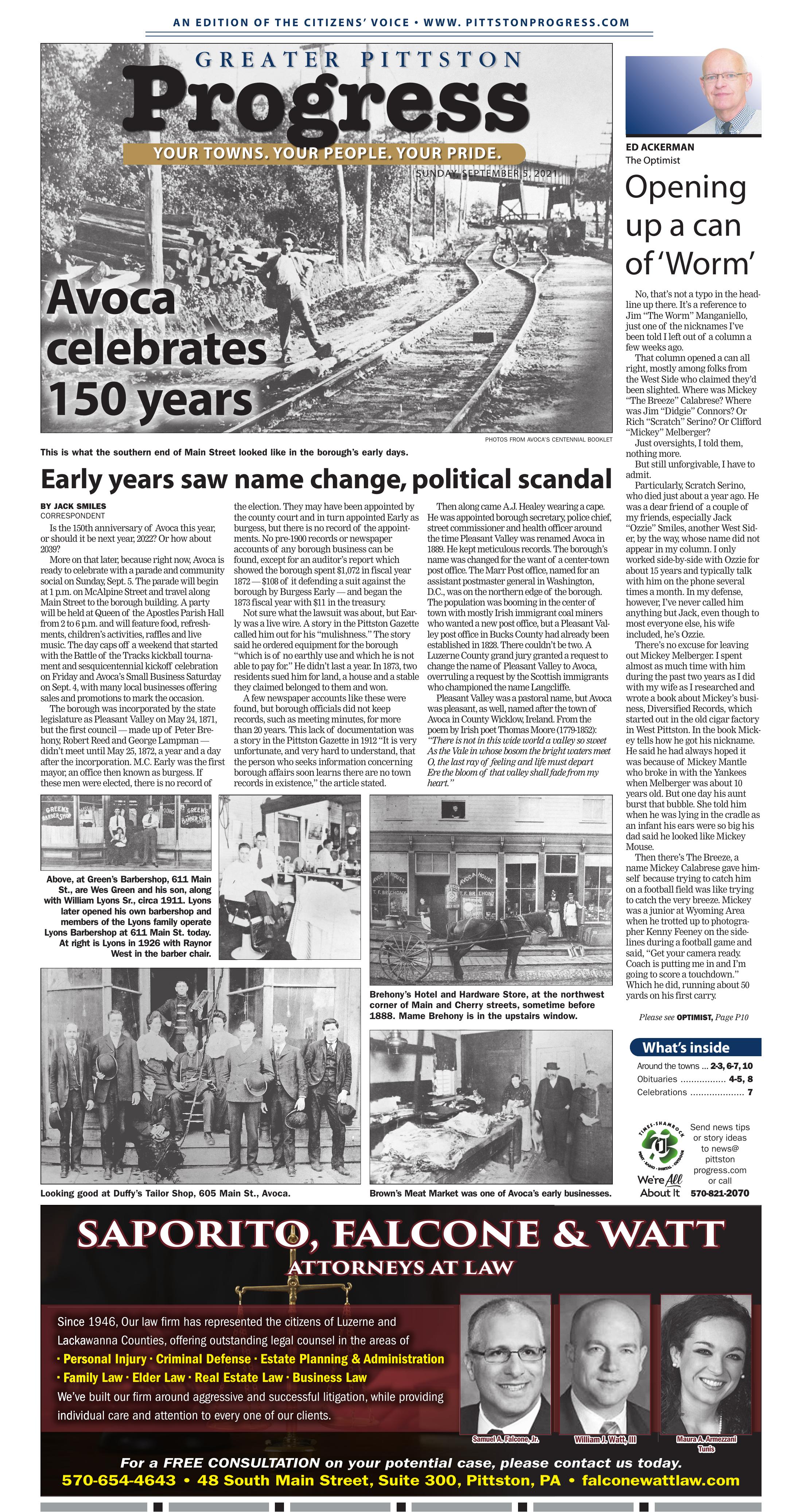 This is what the southern end of Main Street looked like in the borough’s early days.

Above, at Green’s Barbershop, 611 Main St., are Wes Green and his son, along with William Lyons Sr., circa 1911. Lyons later opened his own barbershop and members of the Lyons family operate Lyons Barbershop at 611 Main St. today. At right is Lyons in 1926 with Raynor West in the barber chair.

Brehony’s Hotel and Hardware Store, at the northwest corner of Main and Cherry streets, sometime before 1888. Mame Brehony is in the upstairs window.

Barber William Lyons with Raynor West in his barber’s chair, circa 1926.

Brown’s Meat Market was one of Avoca’s early businesses.

More on that later, because right now, Avoca is ready to celebrate with a parade and community social on Sunday, Sept. 5. The parade will begin at 1 p.m. on McAlpine Street and travel along Main Street to the borough building. A party will be held at Queen of the Apostles Parish Hall from 2 to 6 p.m. and will feature food, refreshments, children’s activities, raffles and live music. The day caps off a weekend that started with the Battle of the Tracks kickball tournament and sesquicentennial kickoff celebration on Friday and Avoca’s Small Business Saturday on Sept. 4, with many local businesses offering sales and promotions to mark the occasion.

The borough was incorporated by the state legislature as Pleasant Valley on May 24, 1871, but the first council — made up of Peter Brehony, Robert Reed and George Lampman — didn’t meet until May 25, 1872, a year and a day after the incorporation. M.C. Early was the first mayor, an office then known as burgess. If these men were elected, there is no record of the election. They may have been appointed by the county court and in turn appointed Early as burgess, but there is no record of the appointments. No pre-1900 records or newspaper accounts of any borough business can be found, except for an auditor’s report which showed the borough spent $1,072 in fiscal year 1872 — $108 of it defending a suit against the borough by Burgess Early — and began the 1873 fiscal year with $11 in the treasury.

Not sure what the lawsuit was about, but Early was a live wire. A story in the Pittston Gazette called him out for his “mulishness.” The story said he ordered equipment for the borough “which is of no earthly use and which he is not able to pay for.” He didn’t last a year. In 1873, two residents sued him for land, a house and a stable they claimed belonged to them and won.

A few newspaper accounts like these were found, but borough officials did not keep records, such as meeting minutes, for more than 20 years. This lack of documentation was a story in the Pittston Gazette in 1912 “It is very unfortunate, and very hard to understand, that the person who seeks information concerning borough affairs soon learns there are no town records in existence,” the article stated.

Then along came A.J. Healey wearing a cape. He was appointed borough secretary, police chief, street commissioner and health officer around the time Pleasant Valley was renamed Avoca in 1889. He kept meticulous records. The borough’s name was changed for the want of a center-town post office. The Marr Post office, named for an assistant postmaster general in Washington, D.C., was on the northern edge of the borough. The population was booming in the center of town with mostly Irish immigrant coal miners who wanted a new post office, but a Pleasant Valley post office in Bucks County had already been established in 1828. There couldn’t be two. A Luzerne County grand jury granted a request to change the name of Pleasant Valley to Avoca, overruling a request by the Scottish immigrants who championed the name Langcliffe.

Pleasant Valley was a pastoral name, but Avoca was pleasant, as well, named after the town of Avoca in County Wicklow, Ireland. From the poem by Irish poet Thomas Moore (1779-1852): “There is not in this wide world a valley so sweet

As the Vale in whose bosom the bright waters meet O, the last ray of feeling and life must depart

Ere the bloom of that valley shall fade from my heart.”

The_optimist
Opening up a can of ‘Worm’
Warren Ruda

No, that’s not a typo in the headline up there. It’s a reference to Jim “The Worm” Manganiello, just one of the nicknames I’ve been told I left out of a column a few weeks ago.

That column opened a can all right, mostly among folks from the West Side who claimed they’d been slighted. Where was Mickey “The Breeze” Calabrese? Where was Jim “Didgie” Connors? Or Rich “Scratch” Serino? Or Clifford “Mickey” Melberger?

Just oversights, I told them, nothing more.

But still unforgivable, I have to admit.

Particularly, Scratch Serino, who died just about a year ago. He was a dear friend of a couple of my friends, especially Jack “Ozzie” Smiles, another West Sider, by the way, whose name did not appear in my column. I only worked side-by-side with Ozzie for about 15 years and typically talk with him on the phone several times a month. In my defense, however, I’ve never called him anything but Jack, even though to most everyone else, his wife included, he’s Ozzie.

There’s no excuse for leaving out Mickey Melberger. I spent almost as much time with him during the past two years as I did with my wife as I researched and wrote a book about Mickey’s business, Diversified Records, which started out in the old cigar factory in West Pittston. In the book Mickey tells how he got his nickname. He said he had always hoped it was because of Mickey Mantle who broke in with the Yankees when Melberger was about 10 years old. But one day his aunt burst that bubble. She told him when he was lying in the cradle as an infant his ears were so big his dad said he looked like Mickey Mouse.

Then there’s The Breeze, a name Mickey Calabrese gave himself because trying to catch him on a football field was like trying to catch the very breeze. Mickey was a junior at Wyoming Area when he trotted up to photographer Kenny Feeney on the sidelines during a football game and said, “Get your camera ready. Coach is putting me in and I’m going to score a touchdown.” Which he did, running about 50 yards on his first carry.

The Breeze is not the only guy to give himself a nickname. Enter Bill Brogna. Bill’s most famous nickname, Brigantine, often simply Brig, I actually pinned on him. In the summer of 1968, I ran into him on Brigantine Island, near Atlantic City. He was putting in long days working at his cousin’s pizza shop and not at all happy about it. I came home and called him “Brigantine Bill” in a softball article and it stuck.

But when the touch football season rolled around, Bill decided he needed another nickname. “I’m thinking ‘Golden Wheels’,” he told me. And when basketball season arrived, he suggested “Bill the Thrill.”

Coining that nickname Brigantine Bill may have been my finest hour in a 50-plus year career of writing. But did I mention him last week? Oh well.

Nor did I mention “Coo” Haley — how did I forget that one? — “Whip” Howley, “Chubby” Mecadon, who was actually skinny (yes, they knew what irony meant back then) and “Harry” Blaskiewicz. I know what you’re thinking: Harry doesn’t sound like a nickname. It’s not. Unless your real name is Tom.

Then there’s Vince Judge. The nickname a few of us tried to pin on him in the ’60s didn’t stick, but we fell all over the place laughing the first time we called him Vince “Here Comes Da” Judge.

A friend told me Joe “Tomato” McDonald was disappointed at not seeing his name listed. Upon hearing this, I was disappointed in myself. Not only did I write about Joe when he was a standout baseball player in his high school days, but you’d think the Pittston TOMATO Festival would have jogged my memory.

But the best reaction to that nickname column came from Bob Licata. In a text, he described “Joey I” Infantino taking roll at the Orioles Club: “Zaffy, here; Shoemaker, here; Fatso, here; Dukie, here. Everyone in this place has a nickname but Ozzie.”

Bob also told a story about seeing Joe Montagna at his son’s baseball game. “I’m calling out to him. Joe, no reply. Joe, no reply JOE! Still no reply. Moo Moo! He answers, what?”

Ed Ackerman writes The Optimist. Look for his blogs online during the week at pittstonprogress.com.