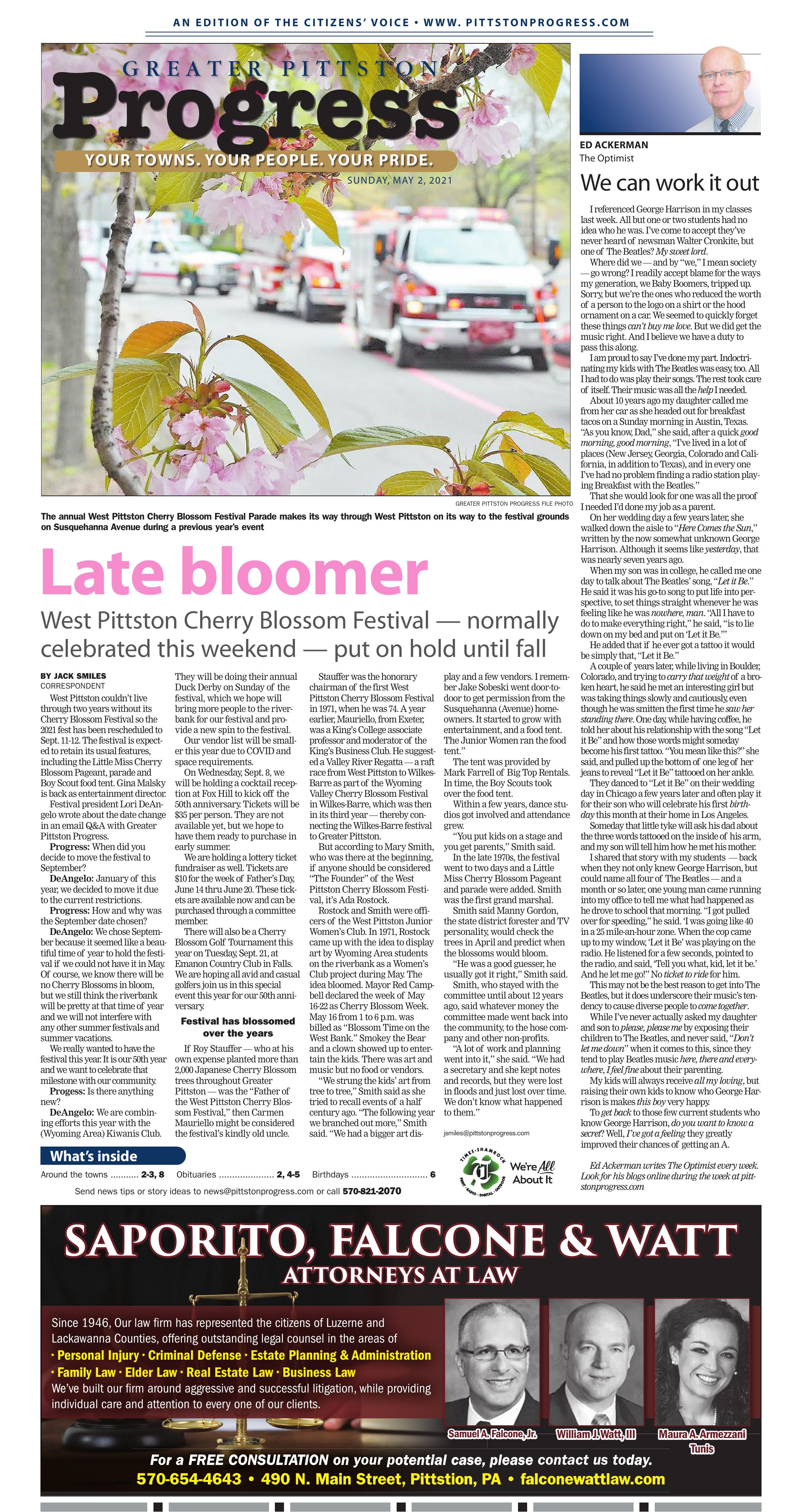 West Pittston couldn’t live through two years without its Cherry Blossom Festival so the 2021 fest has been rescheduled to Sept. 11-12. The festival is expected to retain its usual features, including the Little Miss Cherry Blossom Pageant, parade and Boy Scout food tent. Gina Malsky is back as entertainment director.

Progress: When did you decide to move the festival to September?

DeAngelo: January of this year, we decided to move it due to the current restrictions.

Progress: How and why was the September date chosen?

DeAngelo: We chose September because it seemed like a beautiful time of year to hold the festival if we could not have it in May. Of course, we know there will be no Cherry Blossoms in bloom, but we still think the riverbank will be pretty at that time of year and we will not interfere with any other summer festivals and summer vacations.

We really wanted to have the festival this year. It is our 50th year and we want to celebrate that milestone with our community.

Progess: Is there anything new?

DeAngelo: We are combining efforts this year with the (Wyoming Area) Kiwanis Club. They will be doing their annual Duck Derby on Sunday of the festival, which we hope will bring more people to the riverbank for our festival and provide a new spin to the festival.

Our vendor list will be smaller this year due to COVID and space requirements.

On Wednesday, Sept. 8, we will be holding a cocktail reception at Fox Hill to kick off the 50th anniversary. Tickets will be $35 per person. They are not available yet, but we hope to have them ready to purchase in early summer.

We are holding a lottery ticket fundraiser as well. Tickets are $10 for the week of Father’s Day, June 14 thru June 20. These tickets are available now and can be purchased through a committee member.

There will also be a Cherry Blossom Golf Tournament this year on Tuesday, Sept. 21, at Emanon Country Club in Falls. We are hoping all avid and casual golfers join us in this special event this year for our 50th anniversary.

Festival has blossomed over the years

If Roy Stauffer — who at his own expense planted more than 2,000 Japanese Cherry Blossom trees throughout Greater Pittston — was the “Father of the West Pittston Cherry Blossom Festival,” then Carmen Mauriello might be considered the festival’s kindly old uncle.

Stauffer was the honorary chairman of the first West Pittston Cherry Blossom Festival in 1971, when he was 74. A year earlier, Mauriello, from Exeter, was a King’s College associate professor and moderator of the King’s Business Club. He suggested a Valley River Regatta — a raft race from West Pittston to Wilkes-Barre as part of the Wyoming Valley Cherry Blossom Festival in Wilkes-Barre, which was then in its third year — thereby connecting the Wilkes-Barre festival to Greater Pittston.

But according to Mary Smith, who was there at the beginning, if anyone should be considered “The Founder” of the West Pittston Cherry Blossom Festival, it’s Ada Rostock.

Rostock and Smith were officers of the West Pittston Junior Women’s Club. In 1971, Rostock came up with the idea to display art by Wyoming Area students on the riverbank as a Women’s Club project during May. The idea bloomed. Mayor Red Campbell declared the week of May 16-22 as Cherry Blossom Week. May 16 from 1 to 6 p.m. was billed as “Blossom Time on the West Bank.” Smokey the Bear and a clown showed up to entertain the kids. There was art and music but no food or vendors.

“We strung the kids’ art from tree to tree,” Smith said as she tried to recall events of a half century ago. “The following year we branched out more,” Smith said. “We had a bigger art display and a few vendors. I remember Jake Sobeski went door-to-door to get permission from the Susquehanna (Avenue) homeowners. It started to grow with entertainment, and a food tent. The Junior Women ran the food tent.”

The tent was provided by Mark Farrell of Big Top Rentals. In time, the Boy Scouts took over the food tent.

Within a few years, dance studios got involved and attendance grew.

“You put kids on a stage and you get parents,” Smith said.

In the late 1970s, the festival went to two days and a Little Miss Cherry Blossom Pageant and parade were added. Smith was the first grand marshal.

Smith said Manny Gordon, the state district forester and TV personality, would check the trees in April and predict when the blossoms would bloom.

“He was a good guesser, he usually got it right,” Smith said.

Smith, who stayed with the committee until about 12 years ago, said whatever money the committee made went back into the community, to the hose company and other non-profits.

“A lot of work and planning went into it,” she said. “We had a secretary and she kept notes and records, but they were lost in floods and just lost over time. We don’t know what happened to them.”

The_optimist
We can work it out

I referenced George Harrison in my classes last week. All but one or two students had no idea who he was. I’ve come to accept they’ve never heard of newsman Walter Cronkite, but one of The Beatles? My sweet lord.

Where did we — and by “we,” I mean society — go wrong? I readily accept blame for the ways my generation, we Baby Boomers, tripped up. Sorry, but we’re the ones who reduced the worth of a person to the logo on a shirt or the hood ornament on a car. We seemed to quickly forget these things can’t buy me love. But we did get the music right. And I believe we have a duty to pass this along.

I am proud to say I’ve done my part. Indoctrinating my kids with The Beatles was easy, too. All I had to do was play their songs. The rest took care of itself. Their music was all the help I needed.

About 10 years ago my daughter called me from her car as she headed out for breakfast tacos on a Sunday morning in Austin, Texas. “As you know, Dad,” she said, after a quick good morning, good morning, “I’ve lived in a lot of places (New Jersey, Georgia, Colorado and California, in addition to Texas), and in every one I’ve had no problem finding a radio station playing Breakfast with the Beatles.”

That she would look for one was all the proof I needed I’d done my job as a parent.

On her wedding day a few years later, she walked down the aisle to “Here Comes the Sun,” written by the now somewhat unknown George Harrison. Although it seems like yesterday, that was nearly seven years ago.

When my son was in college, he called me one day to talk about The Beatles’ song, “Let it Be.” He said it was his go-to song to put life into perspective, to set things straight whenever he was feeling like he was nowhere, man. “All I have to do to make everything right,” he said, “is to lie down on my bed and put on ‘Let it Be.’”

He added that if he ever got a tattoo it would be simply that, “Let it Be.”

A couple of years later, while living in Boulder, Colorado, and trying to carry that weight of a broken heart, he said he met an interesting girl but was taking things slowly and cautiously, even though he was smitten the first time he saw her standing there. One day, while having coffee, he told her about his relationship with the song “Let it Be” and how those words might someday become his first tattoo. “You mean like this?” she said, and pulled up the bottom of one leg of her jeans to reveal “Let it Be” tattooed on her ankle.

They danced to “Let it Be” on their wedding day in Chicago a few years later and often play it for their son who will celebrate his first birthday this month at their home in Los Angeles.

Someday that little tyke will ask his dad about the three words tattooed on the inside of his arm, and my son will tell him how he met his mother.

I shared that story with my students — back when they not only knew George Harrison, but could name all four of The Beatles — and a month or so later, one young man came running into my office to tell me what had happened as he drove to school that morning. “I got pulled over for speeding,” he said. ‘I was going like 40 in a 25 mile-an-hour zone. When the cop came up to my window, ‘Let it Be’ was playing on the radio. He listened for a few seconds, pointed to the radio, and said, ‘Tell you what, kid, let it be.’ And he let me go!” No ticket to ride for him.

This may not be the best reason to get into The Beatles, but it does underscore their music’s tendency to cause diverse people to come together.

While I’ve never actually asked my daughter and son to please, please me by exposing their children to The Beatles, and never said, “Don’t let me down” when it comes to this, since they tend to play Beatles music here, there and everywhere, I feel fine about their parenting.

My kids will always receive all my loving, but raising their own kids to know who George Harrison is makes this boy very happy.

To get back to those few current students who know George Harrison, do you want to know a secret? Well, I’ve got a feeling they greatly improved their chances of getting an A.