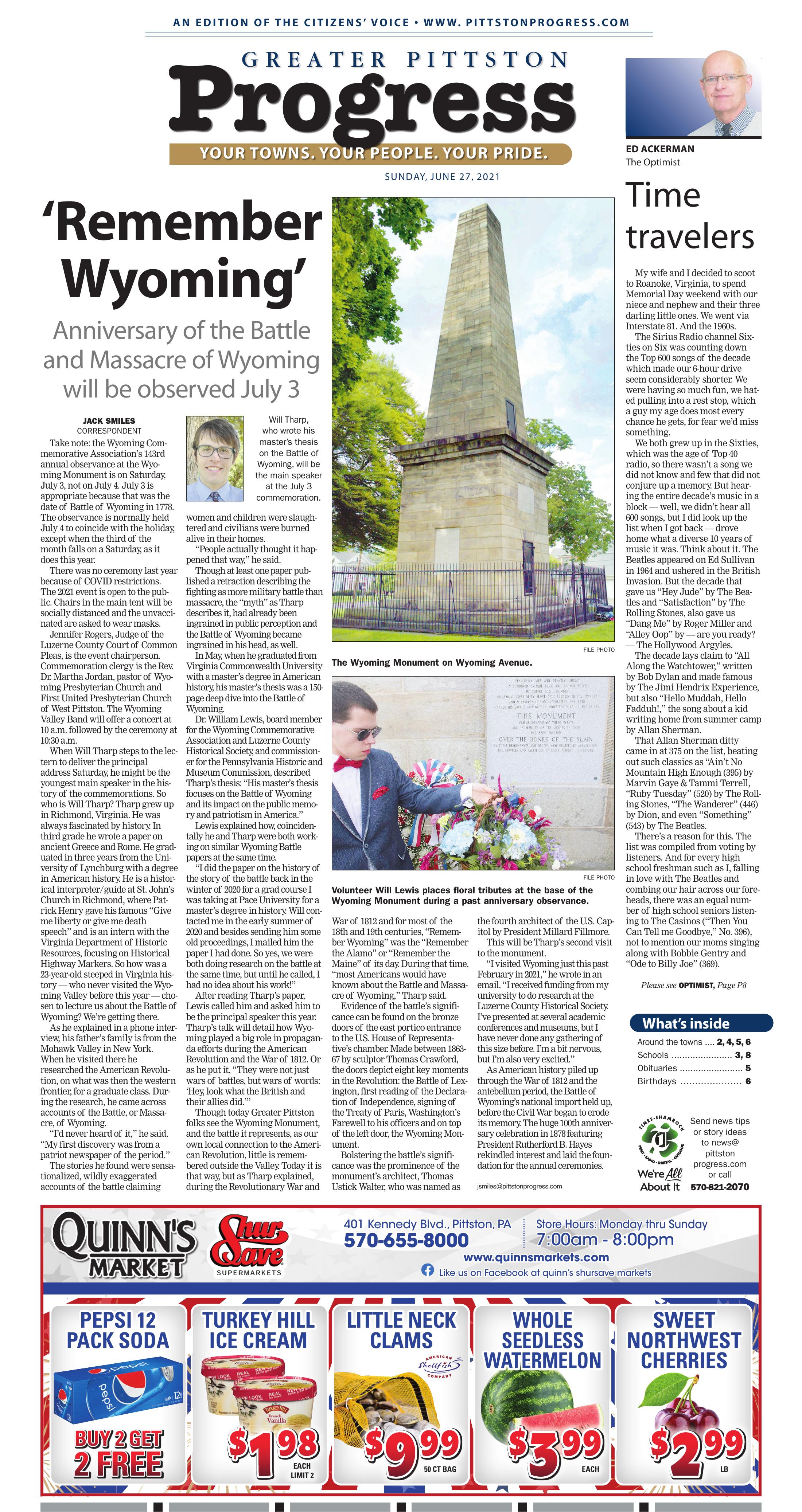 News
top story
'Remember Wyoming': Anniversary of the Battle and Massacre of Wyoming will be observed July 3
file photo

Take note: the Wyoming Commemorative Association’s 143rd annual observance at the Wyoming Monument is on Saturday, July 3, not on July 4. July 3 is appropriate because that was the date of Battle of Wyoming in 1778. The observance is normally held July 4 to coincide with the holiday, except when the third of the month falls on a Saturday, as it does this year.

There was no ceremony last year because of COVID restrictions. The 2021 event is open to the public. Chairs in the main tent will be socially distanced and the unvaccinated are asked to wear masks.

Jennifer Rogers, Judge of the Luzerne County Court of Common Pleas, is the event chairperson. Commemoration clergy is the Rev. Dr. Martha Jordan, pastor of Wyoming Presbyterian Church and First United Presbyterian Church of West Pittston. The Wyoming Valley Band will offer a concert at 10 a.m. followed by the ceremony at 10:30 a.m.

When Will Tharp steps to the lectern to deliver the principal address Saturday, he might be the youngest main speaker in the history of the commemorations. So who is Will Tharp? Tharp grew up in Richmond, Virginia. He was always fascinated by history. In third grade he wrote a paper on ancient Greece and Rome. He graduated in three years from the University of Lynchburg with a degree in American history. He is a historical interpreter/guide at St. John’s Church in Richmond, where Patrick Henry gave his famous “Give me liberty or give me death speech” and is an intern with the Virginia Department of Historic Resources, focusing on Historical Highway Markers. So how was a 23-year-old steeped in Virginia history — who never visited the Wyoming Valley before this year — chosen to lecture us about the Battle of Wyoming? We’re getting there.

As he explained in a phone interview, his father’s family is from the Mohawk Valley in New York. When he visited there he researched the American Revolution, on what was then the western frontier, for a graduate class. During the research, he came across accounts of the Battle, or Massacre, of Wyoming.

“I’d never heard of it,” he said. “My first discovery was from a patriot newspaper of the period.”

The stories he found were sensationalized, wildly exaggerated accounts of the battle claiming women and children were slaughtered and civilians were burned alive in their homes.

“People actually thought it happened that way,” he said.

Though at least one paper published a retraction describing the fighting as more military battle than massacre, the “myth” as Tharp describes it, had already been ingrained in public perception and the Battle of Wyoming became ingrained in his head, as well.

In May, when he graduated from Virginia Commonwealth University with a master’s degree in American history, his master’s thesis was a 150-page deep dive into the Battle of Wyoming.

Dr. William Lewis, board member for the Wyoming Commemorative Association and Luzerne County Historical Society, and commissioner for the Pennsylvania Historic and Museum Commission, described Tharp’s thesis: “His master’s thesis focuses on the Battle of Wyoming and its impact on the public memory and patriotism in America.”

Lewis explained how, coincidentally he and Tharp were both working on similar Wyoming Battle papers at the same time.

“I did the paper on the history of the story of the battle back in the winter of 2020 for a grad course I was taking at Pace University for a master’s degree in history. Will contacted me in the early summer of 2020 and besides sending him some old proceedings, I mailed him the paper I had done. So yes, we were both doing research on the battle at the same time, but until he called, I had no idea about his work!”

After reading Tharp’s paper, Lewis called him and asked him to be the principal speaker this year. Tharp’s talk will detail how Wyoming played a big role in propaganda efforts during the American Revolution and the War of 1812. Or as he put it, “They were not just wars of battles, but wars of words: ‘Hey, look what the British and their allies did.’”

Though today Greater Pittston folks see the Wyoming Monument, and the battle it represents, as our own local connection to the American Revolution, little is remembered outside the Valley. Today it is that way, but as Tharp explained, during the Revolutionary War and War of 1812 and for most of the 18th and 19th centuries, “Remember Wyoming” was the “Remember the Alamo” or “Remember the Maine” of its day. During that time, “most Americans would have known about the Battle and Massacre of Wyoming,” Tharp said.

Evidence of the battle’s significance can be found on the bronze doors of the east portico entrance to the U.S. House of Representative’s chamber. Made between 1863-67 by sculptor Thomas Crawford, the doors depict eight key moments in the Revolution: the Battle of Lexington, first reading of the Declaration of Independence, signing of the Treaty of Paris, Washington’s Farewell to his officers and on top of the left door, the Wyoming Monument.

Bolstering the battle’s significance was the prominence of the monument’s architect, Thomas Ustick Walter, who was named as the fourth architect of the U.S. Capitol by President Millard Fillmore.

This will be Tharp’s second visit to the monument.

“I visited Wyoming just this past February in 2021,” he wrote in an email. “I received funding from my university to do research at the Luzerne County Historical Society. I’ve presented at several academic conferences and museums, but I have never done any gathering of this size before. I’m a bit nervous, but I’m also very excited.”

As American history piled up through the War of 1812 and the antebellum period, the Battle of Wyoming’s national import held up, before the Civil War began to erode its memory. The huge 100th anniversary celebration in 1878 featuring President Rutherford B. Hayes rekindled interest and laid the foundation for the annual ceremonies.

My wife and I decided to scoot to Roanoke, Virginia, to spend Memorial Day weekend with our niece and nephew and their three darling little ones. We went via Interstate 81. And the 1960s.

The Sirius Radio channel Sixties on Six was counting down the Top 600 songs of the decade which made our 6-hour drive seem considerably shorter. We were having so much fun, we hated pulling into a rest stop, which a guy my age does most every chance he gets, for fear we’d miss something.

We both grew up in the Sixties, which was the age of Top 40 radio, so there wasn’t a song we did not know and few that did not conjure up a memory. But hearing the entire decade’s music in a block — well, we didn’t hear all 600 songs, but I did look up the list when I got back — drove home what a diverse 10 years of music it was. Think about it. The Beatles appeared on Ed Sullivan in 1964 and ushered in the British Invasion. But the decade that gave us “Hey Jude” by The Beatles and “Satisfaction” by The Rolling Stones, also gave us “Dang Me” by Roger Miller and “Alley Oop” by — are you ready? — The Hollywood Argyles.

The decade lays claim to “All Along the Watchtower,” written by Bob Dylan and made famous by The Jimi Hendrix Experience, but also “Hello Muddah, Hello Fadduh!,” the song about a kid writing home from summer camp by Allan Sherman.

There’s a reason for this. The list was compiled from voting by listeners. And for every high school freshman such as I, falling in love with The Beatles and combing our hair across our foreheads, there was an equal number of high school seniors listening to The Casinos (“Then You Can Tell me Goodbye,” No. 396), not to mention our moms singing along with Bobbie Gentry and “Ode to Billy Joe” (369).

“The Wanderer” made me think of my sister Sheila. Suddenly I was back in our living room dancing with her, Dick Clark’s American Bandstand on TV.

When she wasn’t dancing with me, she was dancing with the refrigerator. I’m not kidding. Ask her. One thing about the fridge, I suppose, is there was no danger of it stepping on her toes.

The other Sheila in my world — Sheila Gelb, who worked with me at the Sunday Dispatch — comes to mind when I hear anything by Gene Pitney. Can you believe his “A Town Without Pity” barely made the list, landing at 599?

“Mustang Sally” (Wilson Pickett, 335) always makes me think of my friend Gary Mrozinski, who taught it to young music recording majors at the college every year for a little end-of-semester jam session he dubbed “EdFest,” in honor of me.

I’m a little kid in the kitchen with my mom listening to the radio when I hear “Flowers on the Wall,” (291) by the Statler Brothers. “Smokin’ cigarettes and watching Captain Kangaroo, now don’t tell me, I’ve nothin’ to do.” Yes, I still know every word.

I’m sipping beers with buddies at Lou’s Place in Pittston when I hear “Sloop John B” (No. 293) by The Beach Boys. Mike Burke played it several times a night on the jukebox. SEVERAL.

“These Boots Are Made for Walkin’” (241) brings to mind Kenny Feeney, who said that Nancy Sinatra song got him through many a rough day in Vietnam.

And “Ring of Fire” (Johnny Cash, No. 55) brings Gene Guarilia back to life. He owned that song.

I sometimes question the names of current musical stars (Megan Thee Stallion, are you kidding me?), but when you look over the Top 600 of the ’60s you find Herman’s Hermits, Crispian St. Peters, Wayne Fontana and the Mindbenders, Cannibal and the Headhunters, and Ferlin Husky, except in his case, that was his real name.

By the time Sheila was a senior, he had replaced me as her dance partner. He continues in that role to this day.