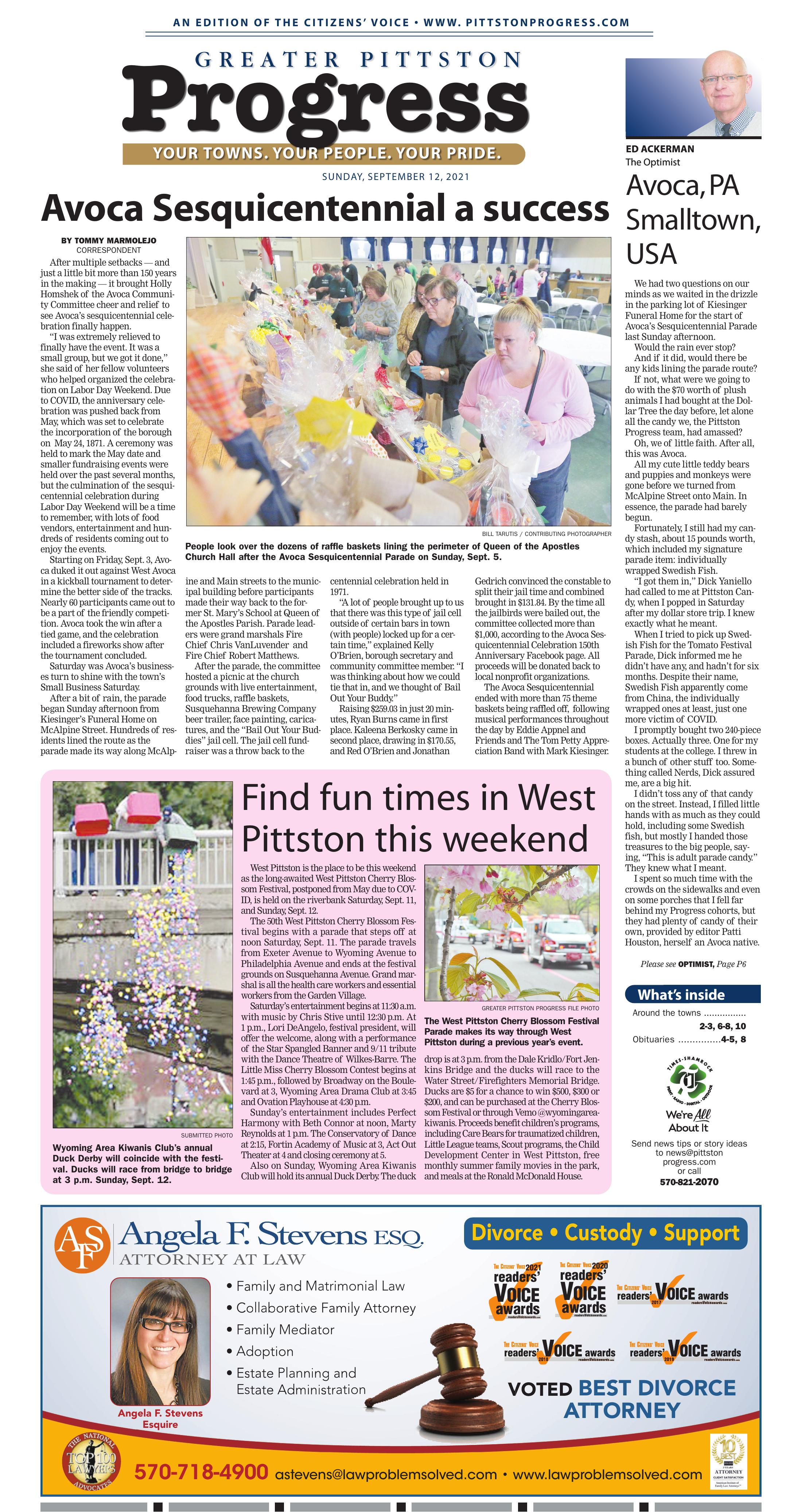 People look over the dozens of raffle baskets lining the perimeter of Queen of the Apostles Church Hall after the Avoca Sesquicentennial Parade on Sunday, Sept. 5.

After multiple setbacks — and just a little bit more than 150 years in the making — it brought Holly Homshek of the Avoca Community Committee cheer and relief to see Avoca’s sesquicentennial celebration finally happen.

“I was extremely relieved to finally have the event. It was a small group, but we got it done,” she said of her fellow volunteers who helped organized the celebration on Labor Day Weekend. Due to COVID, the anniversary celebration was pushed back from May, which was set to celebrate the incorporation of the borough on May 24, 1871. A ceremony was held to mark the May date and smaller fundraising events were held over the past several months, but the culmination of the sesquicentennial celebration during Labor Day Weekend will be a time to remember, with lots of food vendors, entertainment and hundreds of residents coming out to enjoy the events.

Starting on Friday, Sept. 3, Avoca duked it out against West Avoca in a kickball tournament to determine the better side of the tracks. Nearly 60 participants came out to be a part of the friendly competition. Avoca took the win after a tied game, and the celebration included a fireworks show after the tournament concluded.

Saturday was Avoca’s businesses turn to shine with the town’s Small Business Saturday.

After a bit of rain, the parade began Sunday afternoon from Kiesinger’s Funeral Home on McAlpine Street. Hundreds of residents lined the route as the parade made its way along McAlpine and Main streets to the municipal building before participants made their way back to the former St. Mary’s School at Queen of the Apostles Parish. Parade leaders were grand marshals Fire Chief Chris VanLuvender and Fire Chief Robert Matthews.

After the parade, the committee hosted a picnic at the church grounds with live entertainment, food trucks, raffle baskets, Susquehanna Brewing Company beer trailer, face painting, caricatures, and the “Bail Out Your Buddies” jail cell. The jail cell fundraiser was a throw back to the centennial celebration held in 1971.

“A lot of people brought up to us that there was this type of jail cell outside of certain bars in town (with people) locked up for a certain time,” explained Kelly O’Brien, borough secretary and community committee member. “I was thinking about how we could tie that in, and we thought of Bail Out Your Buddy.”

Raising $259.03 in just 20 minutes, Ryan Burns came in first place. Kaleena Berkosky came in second place, drawing in $170.55, and Red O’Brien and Jonathan Gedrich convinced the constable to split their jail time and combined brought in $131.84. By the time all the jailbirds were bailed out, the committee collected more than $1,000, according to the Avoca Sesquicentennial Celebration 150th Anniversary Facebook page. All proceeds will be donated back to local nonprofit organizations.

The Avoca Sesquicentennial ended with more than 75 theme baskets being raffled off, following musical performances throughout the day by Eddie Appnel and Friends and The Tom Petty Appreciation Band with Mark Kiesinger.

Wyoming Area Kiwanis Club’s annual Duck Derby will coincide with the festival. Ducks will race from bridge to bridge at 3 p.m. Sunday, Sept. 12.

West Pittston is the place to be this weekend as the long-awaited West Pittston Cherry Blossom Festival, postponed from May due to COVID, is held on the riverbank Saturday, Sept. 11, and Sunday, Sept. 12.

The 50th West Pittston Cherry Blossom Festival begins with a parade that steps off at noon Saturday, Sept. 11. The parade travels from Exeter Avenue to Wyoming Avenue to Philadelphia Avenue and ends at the festival grounds on Susquehanna Avenue. Grand marshal is all the health care workers and essential workers from the Garden Village.

Saturday’s entertainment begins at 11:30 a.m. with music by Chris Stive until 12:30 p.m. At 1 p.m., Lori DeAngelo, festival president, will offer the welcome, along with a performance of the Star Spangled Banner and 9/11 tribute with the Dance Theatre of Wilkes-Barre. The Little Miss Cherry Blossom Contest begins at 1:45 p.m., followed by Broadway on the Boulevard at 3, Wyoming Area Drama Club at 3:45 and Ovation Playhouse at 4:30 p.m.

Sunday’s entertainment includes Perfect Harmony with Beth Connor at noon, Marty Reynolds at 1 p.m. The Conservatory of Dance at 2:15, Fortin Academy of Music at 3, Act Out Theater at 4 and closing ceremony at 5.

Also on Sunday, Wyoming Area Kiwanis Club will hold its annual Duck Derby. The duck drop is at 3 p.m. from the Dale Kridlo/Fort Jenkins Bridge and the ducks will race to the Water Street/Firefighters Memorial Bridge. Ducks are $5 for a chance to win $500, $300 or $200, and can be purchased at the Cherry Blossom Festival or through Vemo @wyomingarea-kiwanis. Proceeds benefit children’s programs, including Care Bears for traumatized children, Little League teams, Scout programs, the Child Development Center in West Pittston, free monthly summer family movies in the park, and meals at the Ronald McDonald House.

We had two questions on our minds as we waited in the drizzle in the parking lot of Kiesinger Funeral Home for the start of Avoca’s Sesquicentennial Parade last Sunday afternoon.

Would the rain ever stop?

And if it did, would there be any kids lining the parade route?

If not, what were we going to do with the $70 worth of plush animals I had bought at the Dollar Tree the day before, let alone all the candy we, the Pittston Progress team, had amassed?

Oh, we of little faith. After all, this was Avoca.

All my cute little teddy bears and puppies and monkeys were gone before we turned from McAlpine Street onto Main. In essence, the parade had barely begun.

Fortunately, I still had my candy stash, about 15 pounds worth, which included my signature parade item: individually wrapped Swedish Fish.

“I got them in,” Dick Yaniello had called to me at Pittston Candy, when I popped in Saturday after my dollar store trip. I knew exactly what he meant.

When I tried to pick up Swedish Fish for the Tomato Festival Parade, Dick informed me he didn’t have any, and hadn’t for six months. Despite their name, Swedish Fish apparently come from China, the individually wrapped ones at least, just one more victim of COVID.

I promptly bought two 240-piece boxes. Actually three. One for my students at the college. I threw in a bunch of other stuff too. Something called Nerds, Dick assured me, are a big hit.

I didn’t toss any of that candy on the street. Instead, I filled little hands with as much as they could hold, including some Swedish fish, but mostly I handed those treasures to the big people, saying, “This is adult parade candy.” They knew what I meant.

I spent so much time with the crowds on the sidewalks and even on some porches that I fell far behind my Progress cohorts, but they had plenty of candy of their own, provided by editor Patti Houston, herself an Avoca native.

I didn’t see Patti and her family again for the rest of the day, but I did catch up with state Rep. Mike Carroll and we walked together back to the grounds of the former St. Mary’s school for a party that brought together the entire town. I kept thinking, “Walking through Avoca with Mike Carroll is tantamount to walking through South Bend, Indiana, with Knute Rockne.”

Avocans are one big family, as close-knit a group as you could find, and I was grateful to observe the love they have for one another as I caught up with old friends and new, frequently fanning the embers of the legendary West Avoca-Over Town rivalry. Billy Joyce wouldn’t let me pay for my beer — “Your money’s no good in Avoca” — and when I told Red O’Brien I planned to walk back to my car at Kiesinger’s, he insisted he summon a police cruiser to drive me. More on that in a minute.

One of the many things I like about Avoca is that every third person is a Green Bay Packers fan. Heck, they even have a Packer Street. Sam Piemontese, wearing the coolest Packers cap, and I talked not about Aaron Rogers, but former Packer Clay Matthews. His wife, Geri, joined us and said she’s obsessed with Swedish Fish, pulling out of her purse the ones I’d given her earlier. She planned to savor them later.

I cannot mention everyone I ran into, but the list includes Alan Kiesinger, who’s brother Mark’s Tom Petty tribute band was about to go on stage, and Jack McCarthy, who said he’d be playing harmonica on the Petty song “Last Dance with Maryjane.” I grabbed Mike Lavelle by the arm and coaxed him into singing a little of Johnny Mathis’ “Chances Are.” It didn’t take much coaxing. And I was delighted to catch up with my old newspaper colleague Kathleen Berlew and her husband Robbie. Which brings me to the police cruiser.

I told Robbie that what I really wanted to do was to walk back to Kiesinger’s and he said, “C’mon, I’ll show you a short cut.” He and Kathleen walked me all the way down Spring Street and showed me how I could follow the railroad tracks to the Little League and eventually McAlpine Street.

I paused at the Little League park and wondered how many young Avoca kids, how many Mike Carrolls and Robbie Berlews and Alan Kiesingers, had spent their summer days playing ball there. And how many of their kids or even grandkids I may have given candy or a stuffed animal during the parade. All the while hoping the poor fella driving the Avoca cruiser didn’t waste too much time looking for me.