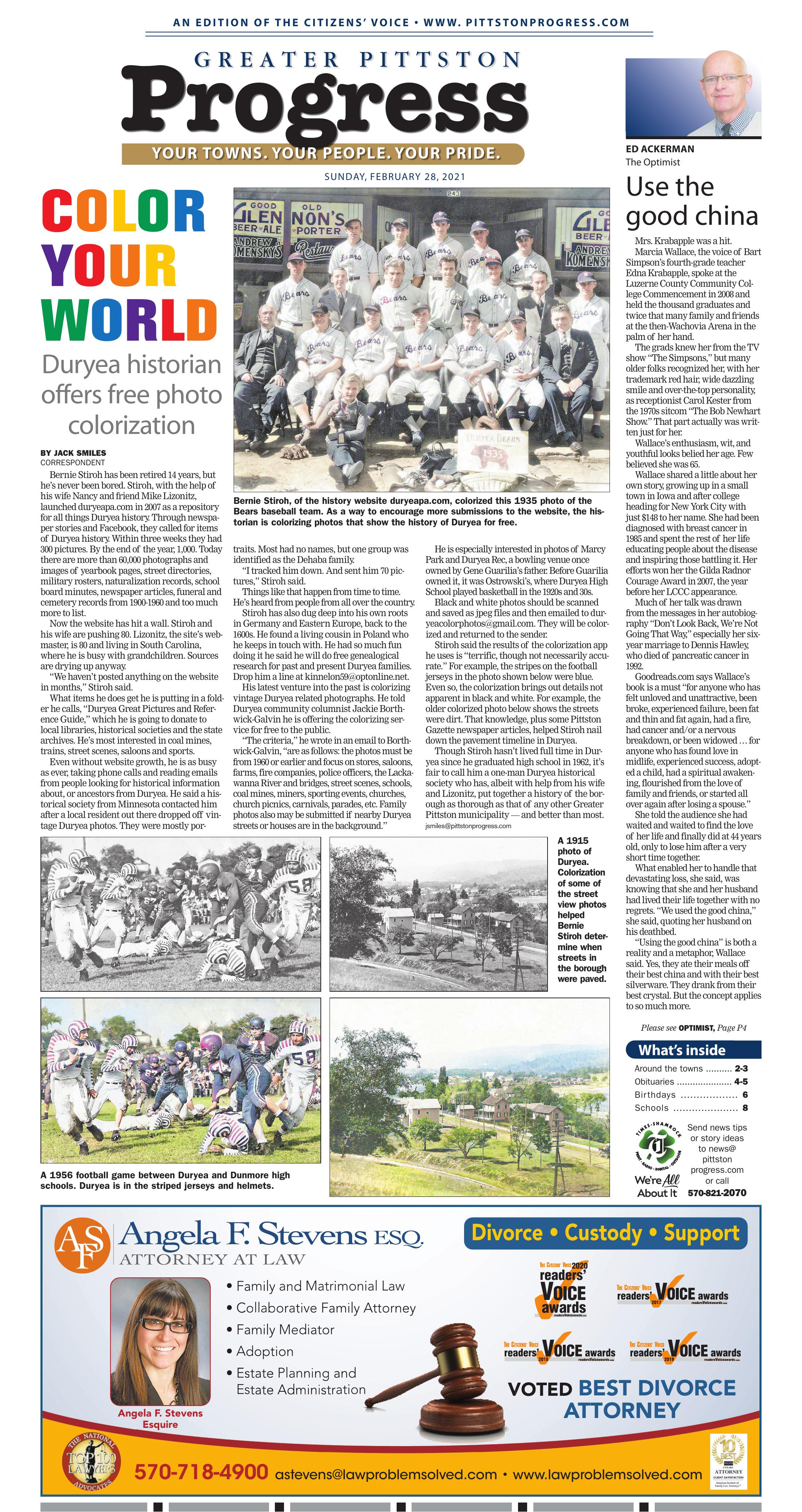 Bernie Stiroh, of the history website duryeapa.com, colorized this 1935 photo of the Bears baseball team. As a way to encourage more submissions to the website, the historian is colorizing photos that show the history of Duryea for free.

A 1956 football game between Duryea and Dunmore high schools. Duryea is in the striped jerseys and helmets.

Colorized version of the 1956 football game between Duryea and Dunmore high schools.

A 1915 photo of Duryea. Colorization of some of the street view photos helped Bernie Stiroh determine when streets in the borough were paved.

Bernie Stiroh has been retired 14 years, but he’s never been bored. Stiroh, with the help of his wife Nancy and friend Mike Lizonitz, launched duryeapa.com in 2007 as a repository for all things Duryea history. Through newspaper stories and Facebook, they called for items of Duryea history. Within three weeks they had 300 pictures. By the end of the year, 1,000. Today there are more than 60,000 photographs and images of yearbook pages, street directories, military rosters, naturalization records, school board minutes, newspaper articles, funeral and cemetery records from 1900-1960 and too much more to list.

Now the website has hit a wall. Stiroh and his wife are pushing 80. Lizonitz, the site’s webmaster, is 80 and living in South Carolina, where he is busy with grandchildren. Sources are drying up anyway.

“We haven’t posted anything on the website in months,” Stiroh said.

What items he does get he is putting in a folder he calls, “Duryea Great Pictures and Reference Guide,” which he is going to donate to local libraries, historical societies and the state archives. He’s most interested in coal mines, trains, street scenes, saloons and sports.

Even without website growth, he is as busy as ever, taking phone calls and reading emails from people looking for historical information about, or ancestors from Duryea. He said a historical society from Minnesota contacted him after a local resident out there dropped off vintage Duryea photos. They were mostly portraits. Most had no names, but one group was identified as the Dehaba family.

“I tracked him down. And sent him 70 pictures,” Stiroh said.

Things like that happen from time to time. He’s heard from people from all over the country.

Stiroh has also dug deep into his own roots in Germany and Eastern Europe, back to the 1600s. He found a living cousin in Poland who he keeps in touch with. He had so much fun doing it he said he will do free genealogical research for past and present Duryea families. Drop him a line at kinnelon59@optonline.net.

His latest venture into the past is colorizing vintage Duryea related photographs. He told Duryea community columnist Jackie Borthwick-Galvin he is offering the colorizing service for free to the public.

“The criteria,” he wrote in an email to Borthwick-Galvin, “are as follows: the photos must be from 1960 or earlier and focus on stores, saloons, farms, fire companies, police officers, the Lackawanna River and bridges, street scenes, schools, coal mines, miners, sporting events, churches, church picnics, carnivals, parades, etc. Family photos also may be submitted if nearby Duryea streets or houses are in the background.”

He is especially interested in photos of Marcy Park and Duryea Rec, a bowling venue once owned by Gene Guarilia’s father. Before Guarilia owned it, it was Ostrowski’s, where Duryea High School played basketball in the 1920s and 30s.

Black and white photos should be scanned and saved as jpeg files and then emailed to duryeacolorphotos@gmail.com. They will be colorized and returned to the sender.

Stiroh said the results of the colorization app he uses is “terrific, though not necessarily accurate.” For example, the stripes on the football jerseys in the photo shown below were blue. Even so, the colorization brings out details not apparent in black and white. For example, the older colorized photo below shows the streets were dirt. That knowledge, plus some Pittston Gazette newspaper articles, helped Stiroh nail down the pavement timeline in Duryea.

Though Stiroh hasn’t lived full time in Duryea since he graduated high school in 1962, it’s fair to call him a one-man Duryea historical society who has, albeit with help from his wife and Lizonitz, put together a history of the borough as thorough as that of any other Greater Pittston municipality — and better than most.

Mrs. Krabapple was a hit.

Marcia Wallace, the voice of Bart Simpson’s fourth-grade teacher Edna Krabapple, spoke at the Luzerne County Community College Commencement in 2008 and held the thousand graduates and twice that many family and friends at the then-Wachovia Arena in the palm of her hand.

The grads knew her from the TV show “The Simpsons,” but many older folks recognized her, with her trademark red hair, wide dazzling smile and over-the-top personality, as receptionist Carol Kester from the 1970s sitcom “The Bob Newhart Show.” That part actually was written just for her.

Wallace’s enthusiasm, wit, and youthful looks belied her age. Few believed she was 65.

Wallace shared a little about her own story, growing up in a small town in Iowa and after college heading for New York City with just $148 to her name. She had been diagnosed with breast cancer in 1985 and spent the rest of her life educating people about the disease and inspiring those battling it. Her efforts won her the Gilda Radnor Courage Award in 2007, the year before her LCCC appearance.

Much of her talk was drawn from the messages in her autobiography “Don’t Look Back, We’re Not Going That Way,” especially her six-year marriage to Dennis Hawley, who died of pancreatic cancer in 1992.

Goodreads.com says Wallace’s book is a must “for anyone who has felt unloved and unattractive, been broke, experienced failure, been fat and thin and fat again, had a fire, had cancer and/or a nervous breakdown, or been widowed … for anyone who has found love in midlife, experienced success, adopted a child, had a spiritual awakening, flourished from the love of family and friends, or started all over again after losing a spouse.”

She told the audience she had waited and waited to find the love of her life and finally did at 44 years old, only to lose him after a very short time together.

What enabled her to handle that devastating loss, she said, was knowing that she and her husband had lived their life together with no regrets. “We used the good china,” she said, quoting her husband on his deathbed.

“Using the good china” is both a reality and a metaphor, Wallace said. Yes, they ate their meals off their best china and with their best silverware. They drank from their best crystal. But the concept applies to so much more.

At the time of Marcia Wallace’s own death in 2013, Frances Locke, author of the blog “Mommy-ish,” referred to her speech at the LCCC commencement and also to an interview she had read in which Wallace brought up the same topic. Locke recalled Wallace relating the exact words of her husband as he lay dying: “Oh, honey, this is horrible. But I’m so glad we used our good china. We didn’t wait to do the things we wanted to do or say the things we wanted to say. You don’t want to die with a lot of regrets.”

That was Marcia Wallace’s primary message to the LCCC grads.

It reminds me of a quote from author Robert Heinlein: “Formal courtesy is even more important between a husband and wife than it is between total strangers.”

It also reminds me of a friend who invites us for coffee and pours it into delicate cups resting on delicate saucers laid out on her dining room table with a lace tablecloth. When she serves a dessert that calls for whipped topping, the Cool Whip awaits in a cut-glass bowl with a silver serving spoon. And of another friend who although she sits down alone to breakfast, serves it to herself on a brightly decorated plate with a cloth napkin folded just so and a fresh flower in a bud vase nearby. And of a third who when offering me a beer, pulls a frosted mug from his freezer. “We’re not barbarians,” he’ll say when I tell him I don’t mind drinking it out of the can.

Marcia Wallace has been on my mind since I read that in an episode aired last Sunday, the producers of “The Simpsons” decided to pay tribute to her. They admitted they weren’t quite sure what to do when Wallace died unexpectedly in 2013 at age 70, so they allowed her character on the show to also pass away. But they always felt she deserved better. So, in an episode they titled “Diary Queen,” they had Bart Simpson discover Mrs. Krabappel’s diary and find out, to his surprise, that she really did believe in him. Bart is touched and inspired by his late teacher’s words.

Thanks to modern technology, they were able to use Wallace’s actual voice taken from previous shows.

They even listed her name in the credits.