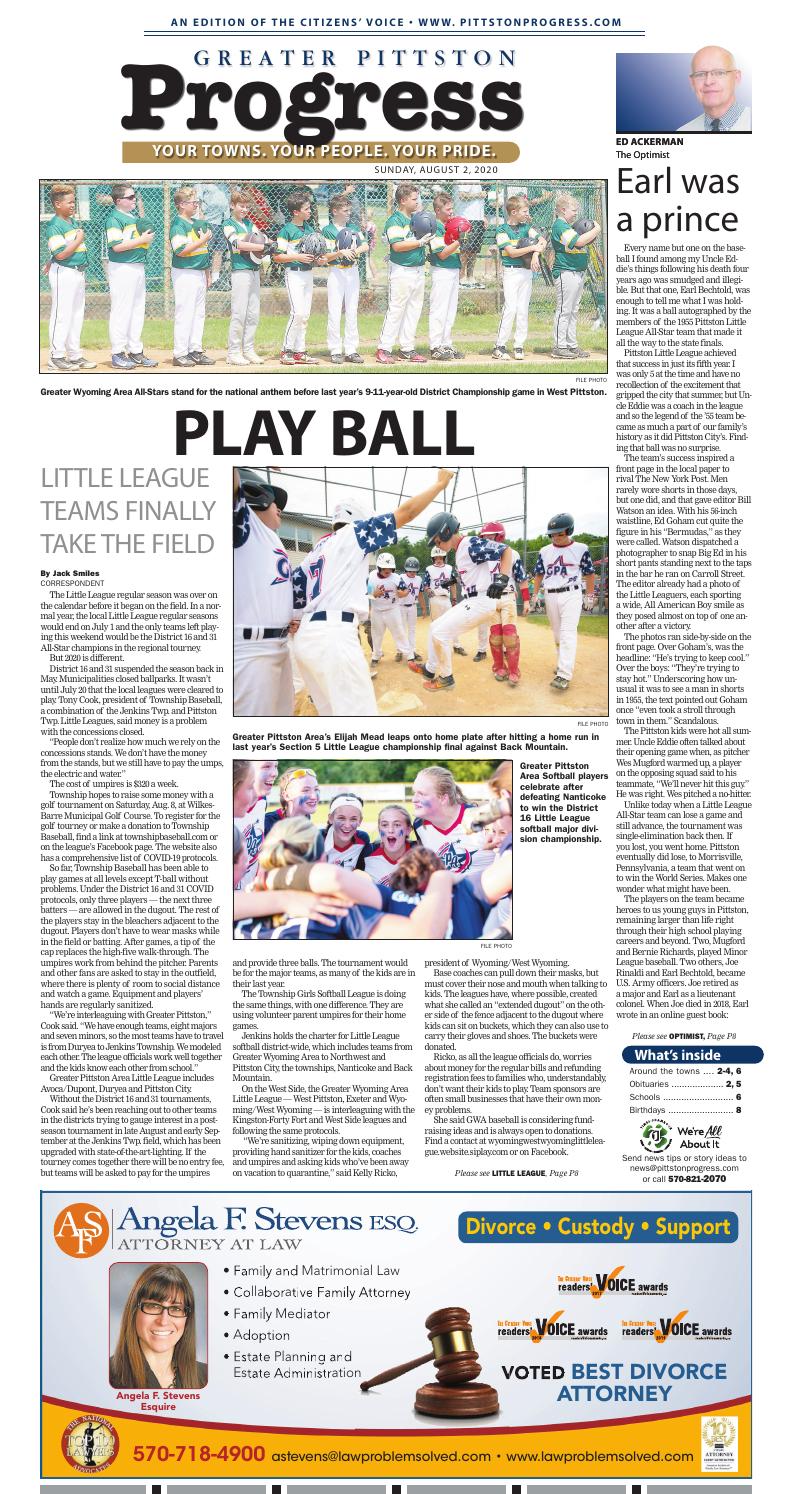 District 16 and 31 suspended the season back in May. Municipalities closed ballparks. It wasn’t until July 20 that the local leagues were cleared to play. Tony Cook, president of Township Baseball, a combination of the Jenkins Twp. and Pittston Twp. Little Leagues, said money is a problem with the concessions closed.

“People don’t realize how much we rely on the concessions stands. We don’t have the money from the stands, but we still have to pay the umps, the electric and water.”

Township hopes to raise some money with a golf tournament on Saturday, Aug. 8, at Wilkes-Barre Municipal Golf Course. To register for the golf tourney or make a donation to Township Baseball, find a link at townshipbaseball.com or on the league’s Facebook page. The website also has a comprehensive list of COVID-19 protocols.

So far, Township Baseball has been able to play games at all levels except T-ball without problems. Under the District 16 and 31 COVID protocols, only three players — the next three batters — are allowed in the dugout. The rest of the players stay in the bleachers adjacent to the dugout. Players don’t have to wear masks while in the field or batting. After games, a tip of the cap replaces the high-five walk-through. The umpires work from behind the pitcher. Parents and other fans are asked to stay in the outfield, where there is plenty of room to social distance and watch a game. Equipment and players’ hands are regularly sanitized.

“We’re interleaguing with Greater Pittston,” Cook said. “We have enough teams, eight majors and seven minors, so the most teams have to travel is from Duryea to Jenkins Township. We modeled each other. The league officials work well together and the kids know each other from school.”

Without the District 16 and 31 tournaments, Cook said he’s been reaching out to other teams in the districts trying to gauge interest in a post-season tournament in late August and early September at the Jenkins Twp. field, which has been upgraded with state-of-the-art-lighting. If the tourney comes together there will be no entry fee, but teams will be asked to pay for the umpires and provide three balls. The tournament would be for the major teams, as many of the kids are in their last year.

The Township Girls Softball League is doing the same things, with one difference. They are using volunteer parent umpires for their home games.

Jenkins holds the charter for Little League softball district-wide, which includes teams from Greater Wyoming Area to Northwest and Pittston City, the townships, Nanticoke and Back Mountain.

On the West Side, the Greater Wyoming Area Little League — West Pittston, Exeter and Wyoming/West Wyoming — is interleaguing with the Kingston-Forty Fort and West Side leagues and following the same protocols.

“We’re sanitizing, wiping down equipment, providing hand sanitizer for the kids, coaches and umpires and asking kids who’ve been away on vacation to quarantine,” said Kelly Ricko, president of Wyoming/West Wyoming.

Base coaches can pull down their masks, but must cover their nose and mouth when talking to kids. The leagues have, where possible, created what she called an “extended dugout” on the other side of the fence adjacent to the dugout where kids can sit on buckets, which they can also use to carry their gloves and shoes. The buckets were donated.

Ricko, as all the league officials do, worries about money for the regular bills and refunding registration fees to families who, understandably, don’t want their kids to play. Team sponsors are often small businesses that have their own money problems.

She said GWA baseball is considering fundraising ideas and is always open to donations. Find a contact at wyomingwestwyominglittleleague.website.siplay.com or on Facebook.

The goal, she said, is to give the kids as safe and normal a summer as possible.

West Pittston president Tim Little agrees. West Pittston has a pavilion where spectators, and visiting players, have room to social distance. “We have a fogger for equipment and social distance signs,” Little said. “The kids are excited. They want to practice, they want to play. We’re doing everything we can to make it safe and give them a baseball season.”

Exeter president Marc Layland has been involved in softball for 10 years. GWA softball is following the same District 16/31 covid protocols. GWA is fielding two teams both at the major level only. They play their home games in Exeter, where the bleachers were moved to create an extended dugout where kids can distance on buckets. The teams use their own balls and retrieve foul balls. Coaches wear masks in the dugout. Kids use hand sanitizer after touching equipment.

Layland said the concession is open for drinks and packaged candy only. That provides a little revenue, but not enough. “It’s a difficult year. The District asked us to keep receipts and we may be eligible for state funding. We’re thankful our local community sponsors have stayed in. We’re considering fundraisers. A corn hole tournament is one option.”

Again visit GWA on Facebook or the Wyoming West Wyoming website to donate, volunteer or for more info.

Every name but one on the baseball I found among my Uncle Eddie’s things following his death four years ago was smudged and illegible. But that one, Earl Bechtold, was enough to tell me what I was holding. It was a ball autographed by the members of the 1955 Pittston Little League All-Star team that made it all the way to the state finals.

Pittston Little League achieved that success in just its fifth year. I was only 5 at the time and have no recollection of the excitement that gripped the city that summer, but Uncle Eddie was a coach in the league and so the legend of the ’55 team became as much a part of our family’s history as it did Pittston City’s. Finding that ball was no surprise.

The team’s success inspired a front page in the local paper to rival The New York Post. Men rarely wore shorts in those days, but one did, and that gave editor Bill Watson an idea. With his 56-inch waistline, Ed Goham cut quite the figure in his “Bermudas,” as they were called. Watson dispatched a photographer to snap Big Ed in his short pants standing next to the taps in the bar he ran on Carroll Street. The editor already had a photo of the Little Leaguers, each sporting a wide, All American Boy smile as they posed almost on top of one another after a victory.

The photos ran side-by-side on the front page. Over Goham’s, was the headline: “He’s trying to keep cool.” Over the boys: “They’re trying to stay hot.” Underscoring how unusual it was to see a man in shorts in 1955, the text pointed out Goham once “even took a stroll through town in them.” Scandalous.

The Pittston kids were hot all summer. Uncle Eddie often talked about their opening game when, as pitcher Wes Mugford warmed up, a player on the opposing squad said to his teammate, “We’ll never hit this guy.” He was right. Wes pitched a no-hitter.

Unlike today when a Little League All-Star team can lose a game and still advance, the tournament was single-elimination back then. If you lost, you went home. Pittston eventually did lose, to Morrisville, Pennsylvania, a team that went on to win the World Series. Makes one wonder what might have been.

The players on the team became heroes to us young guys in Pittston, remaining larger than life right through their high school playing careers and beyond. Two, Mugford and Bernie Richards, played Minor League baseball. Two others, Joe Rinaldi and Earl Bechtold, became U.S. Army officers. Joe retired as a major and Earl as a lieutenant colonel. When Joe died in 2018, Earl wrote in an online guest book:

“Joe and I go back to grade school at Fort Pittston. He was a great third baseman. I have a photo of the two of us as little kids in my backyard. We’re wearing sailor hats, which is funny because we both wound up with careers in the army.”

Earl was living in Leavenworth, Kansas, when I tracked him down to tell him about the baseball. Following his 23-year military career, during which he served in Vietnam, Germany and Korea, he earned a master’s degree from Duquesne University and settled in Leavenworth where he worked for Northrup Grumman in military computer simulations. He recalled the players signing baseballs for each other and their coaches in ’55. He said his dad was exceptionally proud of that baseball, but through several family relocations, it had been lost. I sent Uncle Eddie’s ball to him the next day. After receiving it, he wrote, “My youngest son, Mark, and his family are coming from Chicago to visit later this month and I plan to give him the ball you sent me. He intends to put it in the shadow box he had made and hangs in his office with other items from my 1955 Pittston Little League season.”

Earl married his high school sweetheart Peggy Bilbow, known to family and friends as “Poppie.” It was her cousin Patrick Bilbow, a Pittston Area principal, who texted me Friday with the news of Earl’s death. Pat said he was at his son’s game at Pittston Little League when he got the message, which his cousin Sheila took as a sign. Earl had played shortstop there 65 years ago.

Pat sent along a video of Earl’s flag-draped body being wheeled from the hospital. With taps playing, every nurse and doctor lining the hallway rose to their feet, some saluting and some with hands over their hearts. Viewing it, I could not help but cry.

When we talked in 2016, Earl told me he and Peggy had lost track of their old friend Michael Clark, whose friendship with Peggy goes back to grade school. I was able to make that connection. Michael, who lives in Washington, D.C., was broken hearted when I told him of Earl’s passing. “In high school at St. John’s,” he recalled, “Poppie and I were rehearsing for a minstrel. Every night after practice, Earl would be waiting to walk her home to the Junction and then walk back to his house in the middle of town. He was a gentleman even then.”

I know. And we younger guys all wanted to grow up to be just like him. 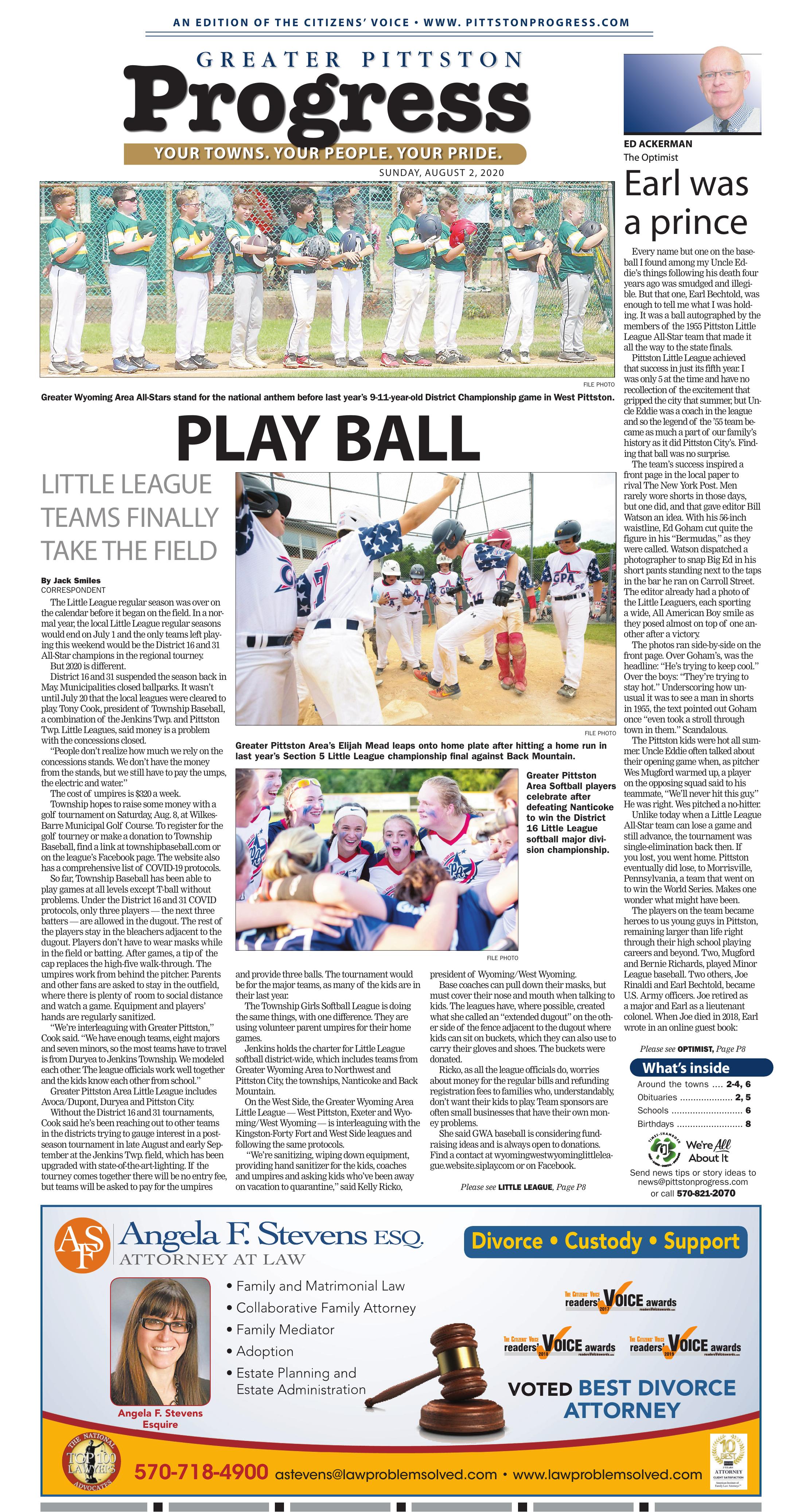