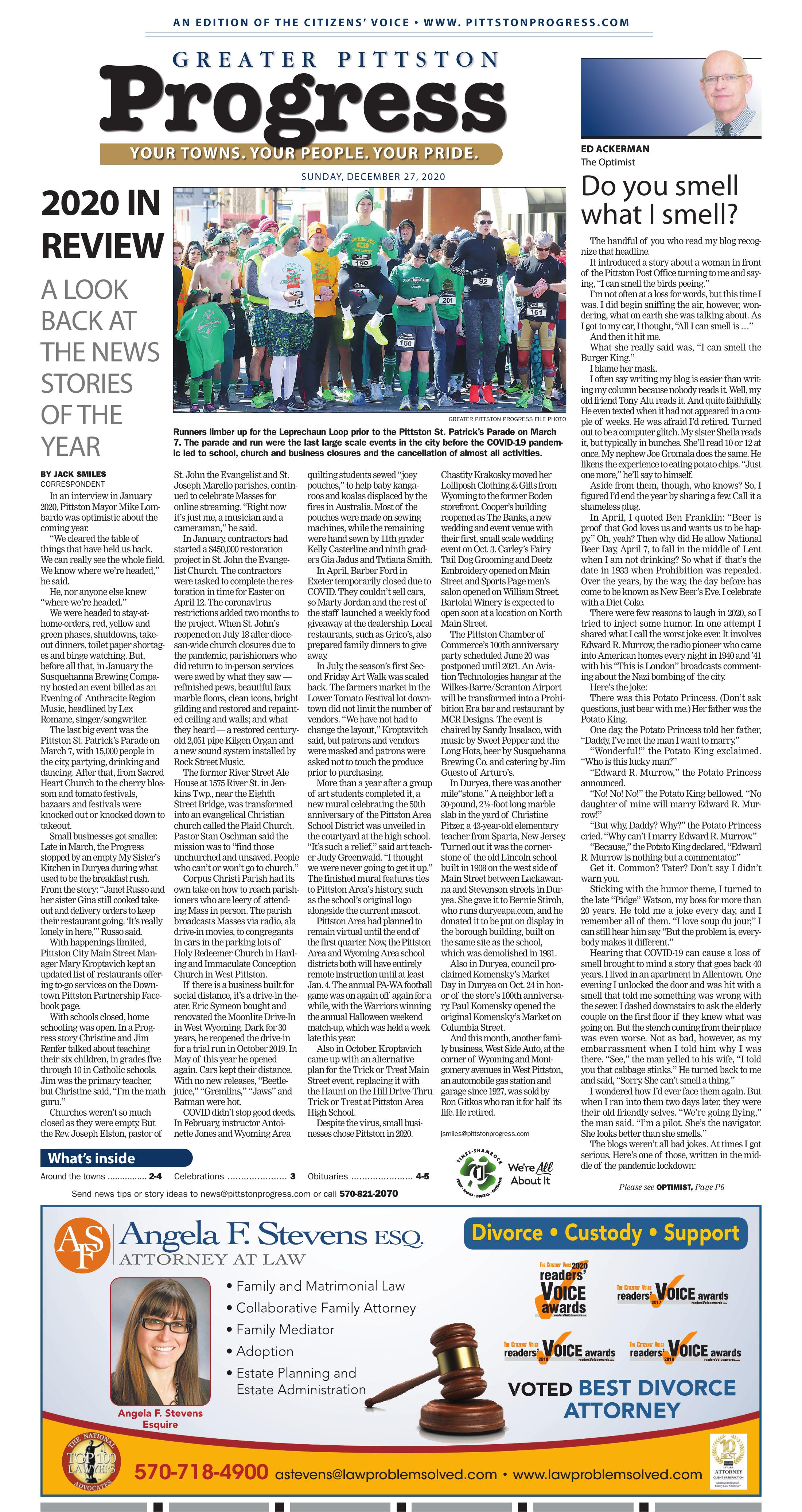 News
top story
2020 in review: A look back at the news stories of the year
Greater Pittston Progress file photo

In an interview in January 2020, Pittston Mayor Mike Lombardo was optimistic about the coming year.

“We cleared the table of things that have held us back. We can really see the whole field. We know where we’re headed,” he said.

He, nor anyone else knew “where we’re headed.”

We were headed to stay-at-home-orders, red, yellow and green phases, shutdowns, take-out dinners, toilet paper shortages and binge watching. But, before all that, in January the Susquehanna Brewing Company hosted an event billed as an Evening of Anthracite Region Music, headlined by Lex Romane, singer/songwriter.

The last big event was the Pittston St. Patrick’s Parade on March 7, with 15,000 people in the city, partying, drinking and dancing. After that, from Sacred Heart Church to the cherry blossom and tomato festivals, bazaars and festivals were knocked out or knocked down to takeout.

Small businesses got smaller. Late in March, the Progress stopped by an empty My Sister’s Kitchen in Duryea during what used to be the breakfast rush. From the story: “Janet Russo and her sister Gina still cooked takeout and delivery orders to keep their restaurant going. ‘It’s really lonely in here,’” Russo said.

With schools closed, home schooling was open. In a Progress story Christine and Jim Renfer talked about teaching their six children, in grades five through 10 in Catholic schools. Jim was the primary teacher, but Christine said, “I’m the math guru.”

Churches weren’t so much closed as they were empty. But the Rev. Joseph Elston, pastor of St. John the Evangelist and St. Joseph Marello parishes, continued to celebrate Masses for online streaming. “Right now it’s just me, a musician and a cameraman,” he said.

In January, contractors had started a $450,000 restoration project in St. John the Evangelist Church. The contractors were tasked to complete the restoration in time for Easter on April 12. The coronavirus restrictions added two months to the project. When St. John’s reopened on July 18 after diocesan-wide church closures due to the pandemic, parishioners who did return to in-person services were awed by what they saw — refinished pews, beautiful faux marble floors, clean icons, bright gilding and restored and repainted ceiling and walls; and what they heard — a restored century-old 2,051 pipe Kilgen Organ and a new sound system installed by Rock Street Music.

The former River Street Ale House at 1575 River St. in Jenkins Twp., near the Eighth Street Bridge, was transformed into an evangelical Christian church called the Plaid Church. Pastor Stan Oschman said the mission was to “find those unchurched and unsaved. People who can’t or won’t go to church.”

Corpus Christi Parish had its own take on how to reach parishioners who are leery of attending Mass in person. The parish broadcasts Masses via radio, ala drive-in movies, to congregants in cars in the parking lots of Holy Redeemer Church in Harding and Immaculate Conception Church in West Pittston.

If there is a business built for social distance, it’s a drive-in theater. Eric Symeon bought and renovated the Moonlite Drive-In in West Wyoming. Dark for 30 years, he reopened the drive-in for a trial run in October 2019. In May of this year he opened again. Cars kept their distance. With no new releases, “Beetlejuice,” “Gremlins,” “Jaws” and Batman were hot.

COVID didn’t stop good deeds. In February, instructor Antoinette Jones and Wyoming Area quilting students sewed “joey pouches,” to help baby kangaroos and koalas displaced by the fires in Australia. Most of the pouches were made on sewing machines, while the remaining were hand sewn by 11th grader Kelly Casterline and ninth graders Gia Jadus and Tatiana Smith.

In April, Barber Ford in Exeter temporarily closed due to COVID. They couldn’t sell cars, so Marty Jordan and the rest of the staff launched a weekly food giveaway at the dealership. Local restaurants, such as Grico’s, also prepared family dinners to give away.

In July, the season’s first Second Friday Art Walk was scaled back. The farmers market in the Lower Tomato Festival lot downtown did not limit the number of vendors. “We have not had to change the layout,” Kroptavitch said, but patrons and vendors were masked and patrons were asked not to touch the produce prior to purchasing.

More than a year after a group of art students completed it, a new mural celebrating the 50th anniversary of the Pittston Area School District was unveiled in the courtyard at the high school. “It’s such a relief,” said art teacher Judy Greenwald. “I thought we were never going to get it up.” The finished mural features ties to Pittston Area’s history, such as the school’s original logo alongside the current mascot.

Pittston Area had planned to remain virtual until the end of the first quarter. Now, the Pittston Area and Wyoming Area school districts both will have entirely remote instruction until at least Jan. 4. The annual PA-WA football game was on again off again for a while, with the Warriors winning the annual Halloween weekend match-up, which was held a week late this year.

Also in October, Kroptavich came up with an alternative plan for the Trick or Treat Main Street event, replacing it with the Haunt on the Hill Drive-Thru Trick or Treat at Pittston Area High School.

The Pittston Chamber of Commerce’s 100th anniversary party scheduled June 20 was postponed until 2021. An Aviation Technologies hangar at the Wilkes-Barre/Scranton Airport will be transformed into a Prohibition Era bar and restaurant by MCR Designs. The event is chaired by Sandy Insalaco, with music by Sweet Pepper and the Long Hots, beer by Susquehanna Brewing Co. and catering by Jim Guesto of Arturo’s.

In Duryea, there was another mile“stone.” A neighbor left a 30-pound, 2½-foot long marble slab in the yard of Christine Pitzer, a 43-year-old elementary teacher from Sparta, New Jersey. Turned out it was the cornerstone of the old Lincoln school built in 1908 on the west side of Main Street between Lackawanna and Stevenson streets in Duryea. She gave it to Bernie Stiroh, who runs duryeapa.com, and he donated it to be put on display in the borough building, built on the same site as the school, which was demolished in 1981.

And this month, another family business, West Side Auto, at the corner of Wyoming and Montgomery avenues in West Pittston, an automobile gas station and garage since 1927, was sold by Ron Gitkos who ran it for half its life. He retired.

The_optimist
Do you smell what I smell?
Warren Ruda

The handful of you who read my blog recognize that headline.

It introduced a story about a woman in front of the Pittston Post Office turning to me and saying, “I can smell the birds peeing.”

I’m not often at a loss for words, but this time I was. I did begin sniffing the air, however, wondering, what on earth she was talking about. As I got to my car, I thought, “All I can smell is …”

And then it hit me.

What she really said was, “I can smell the Burger King.”

I blame her mask.

I often say writing my blog is easier than writing my column because nobody reads it. Well, my old friend Tony Alu reads it. And quite faithfully. He even texted when it had not appeared in a couple of weeks. He was afraid I’d retired. Turned out to be a computer glitch. My sister Sheila reads it, but typically in bunches. She’ll read 10 or 12 at once. My nephew Joe Gromala does the same. He likens the experience to eating potato chips. “Just one more,” he’ll say to himself.

Aside from them, though, who knows? So, I figured I’d end the year by sharing a few. Call it a shameless plug.

In April, I quoted Ben Franklin: “Beer is proof that God loves us and wants us to be happy.” Oh, yeah? Then why did He allow National Beer Day, April 7, to fall in the middle of Lent when I am not drinking? So what if that’s the date in 1933 when Prohibition was repealed. Over the years, by the way, the day before has come to be known as New Beer’s Eve. I celebrate with a Diet Coke.

There were few reasons to laugh in 2020, so I tried to inject some humor. In one attempt I shared what I call the worst joke ever. It involves Edward R. Murrow, the radio pioneer who came into American homes every night in 1940 and ’41 with his “This is London” broadcasts commenting about the Nazi bombing of the city.

There was this Potato Princess. (Don’t ask questions, just bear with me.) Her father was the Potato King.

One day, the Potato Princess told her father, “Daddy, I’ve met the man I want to marry.”

“Wonderful!” the Potato King exclaimed. “Who is this lucky man?”

“No! No! No!” the Potato King bellowed. “No daughter of mine will marry Edward R. Murrow!”

“But why, Daddy? Why?” the Potato Princess cried. “Why can’t I marry Edward R. Murrow.”

“Because,” the Potato King declared, “Edward R. Murrow is nothing but a commentator.”

Get it. Common? Tater? Don’t say I didn’t warn you.

Sticking with the humor theme, I turned to the late “Pidge” Watson, my boss for more than 20 years. He told me a joke every day, and I remember all of them. “I love soup du jour,” I can still hear him say. “But the problem is, everybody makes it different.”

Hearing that COVID-19 can cause a loss of smell brought to mind a story that goes back 40 years. I lived in an apartment in Allentown. One evening I unlocked the door and was hit with a smell that told me something was wrong with the sewer. I dashed downstairs to ask the elderly couple on the first floor if they knew what was going on. But the stench coming from their place was even worse. Not as bad, however, as my embarrassment when I told him why I was there. “See,” the man yelled to his wife, “I told you that cabbage stinks.” He turned back to me and said, “Sorry. She can’t smell a thing.”

I wondered how I’d ever face them again. But when I ran into them two days later, they were their old friendly selves. “We’re going flying,” the man said. “I’m a pilot. She’s the navigator. She looks better than she smells.”

The blogs weren’t all bad jokes. At times I got serious. Here’s one of those, written in the middle of the pandemic lockdown:

They call death “The Great Equalizer,” but so, too, can be an emergency.

Barriers tend to disintegrate at times like this. It’s reminiscent of the Flood of 1972. When the stock broker was filling sandbags right next to the stock boy, they soon discovered they were more alike than different. Too bad it takes a flood, or a novel coronavirus to remind us.

I’ll close with something I always write at this time of year. It’s the New Year blessing of Father Charlie Rokosz at the beginning of 1996:

“In the new year may you be blessed with enough prosperity to remain humble.”

Ed Ackerman writes The Optimist. Look for his blogs online at pittstonprogress.com.