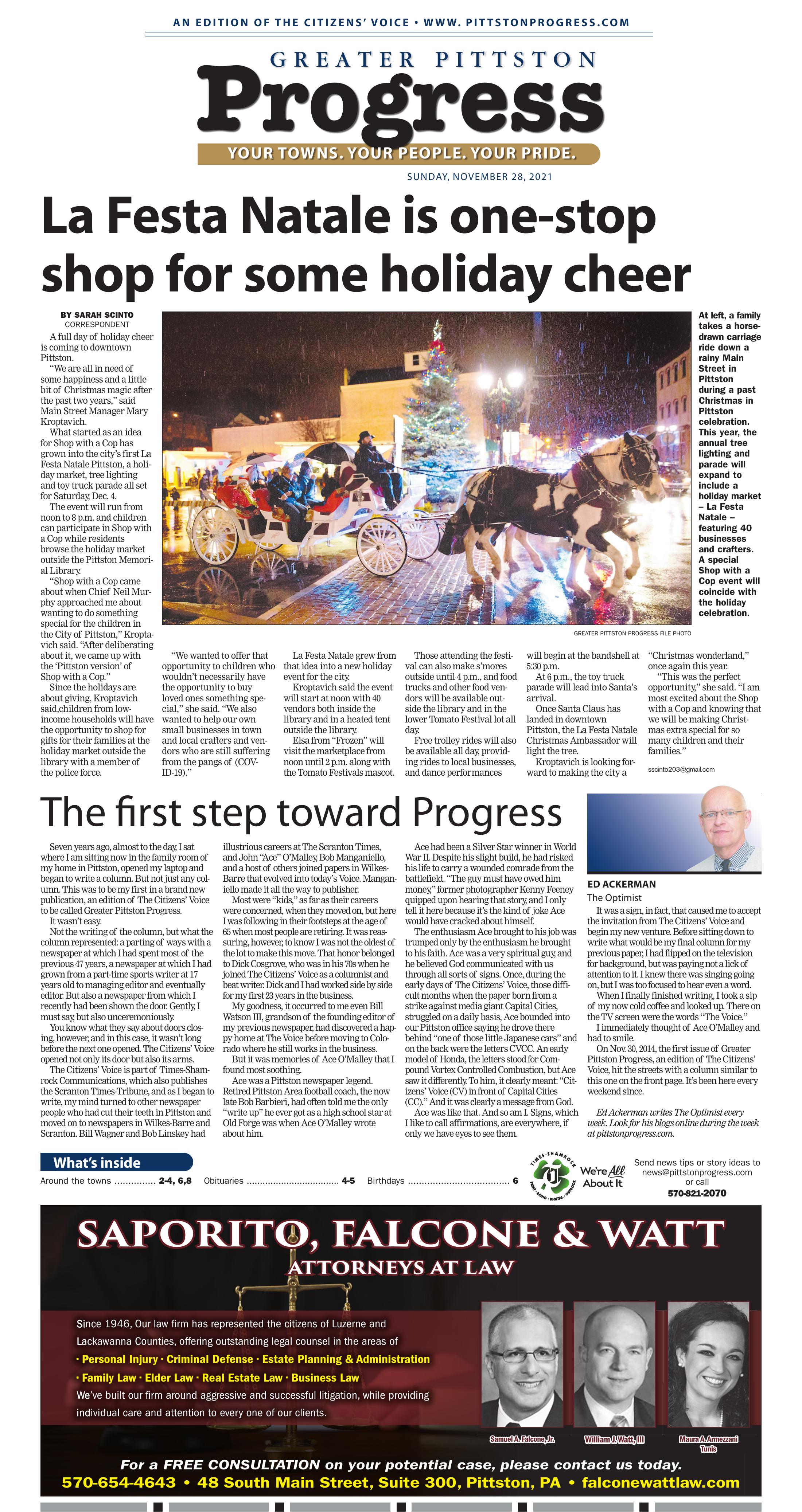 At left, a family takes a horse-drawn carriage ride down a rainy Main Street in Pittston during a past Christmas in Pittston celebration. This year, the annual tree lighting and parade will expand to include a holiday market – La Festa Natale – featuring 40 businesses and crafters. A special Shop with a Cop event will coincide with the holiday celebration.

Emily Matalonis talks with Santa at a past Christmas in Pittston.

Karen Haggerty of Pittston is the Winter Witch at Christmas in Pittston.

A full day of holiday cheer is coming to downtown Pittston.

“We are all in need of some happiness and a little bit of Christmas magic after the past two years,” said Main Street Manager Mary Kroptavich.

What started as an idea for Shop with a Cop has grown into the city’s first La Festa Natale Pittston, a holiday market, tree lighting and toy truck parade all set for Saturday, Dec. 4.

The event will run from noon to 8 p.m. and children can participate in Shop with a Cop while residents browse the holiday market outside the Pittston Memorial Library.

“Shop with a Cop came about when Chief Neil Murphy approached me about wanting to do something special for the children in the City of Pittston,” Kroptavich said. “After deliberating about it, we came up with the ‘Pittston version’ of Shop with a Cop.”

Since the holidays are about giving, Kroptavich said,children from low-income households will have the opportunity to shop for gifts for their families at the holiday market outside the library with a member of the police force.

“We wanted to offer that opportunity to children who wouldn’t necessarily have the opportunity to buy loved ones something special,” she said. “We also wanted to help our own small businesses in town and local crafters and vendors who are still suffering from the pangs of (COVID-19).”

La Festa Natale grew from that idea into a new holiday event for the city.

Elsa from “Frozen” will visit the marketplace from noon until 2 p.m. along with the Tomato Festivals mascot.

Those attending the festival can also make s’mores outside until 4 p.m., and food trucks and other food vendors will be available outside the library and in the lower Tomato Festival lot all day.

Free trolley rides will also be available all day, providing rides to local businesses, and dance performances will begin at the bandshell at 5:30 p.m.

At 6 p.m., the toy truck parade will lead into Santa’s arrival.

Once Santa Claus has landed in downtown Pittston, the La Festa Natale Christmas Ambassador will light the tree.

Kroptavich is looking forward to making the city a “Christmas wonderland,” once again this year.

“This was the perfect opportunity,” she said. “I am most excited about the Shop with a Cop and knowing that we will be making Christmas extra special for so many children and their families.” 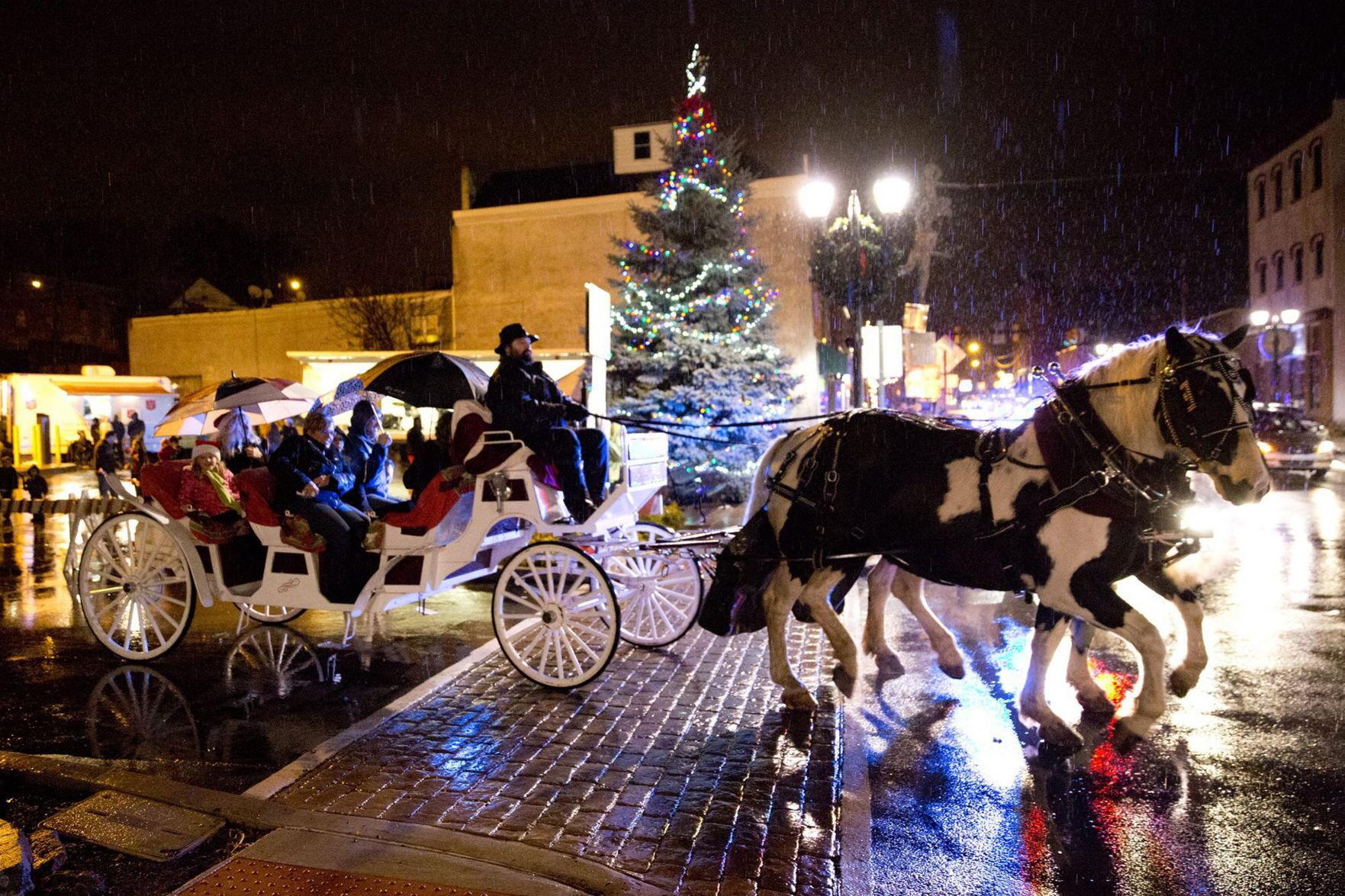 At left, a family takes a horse-drawn carriage ride down a rainy Main Street in Pittston during a past Christmas in Pittston celebration. This year, the annual tree lighting and parade will expand to include a holiday market – La Festa Natale – featuring 40 businesses and crafters. A special Shop with a Cop event will coincide with the holiday celebration.

Seven years ago, almost to the day, I sat where I am sitting now in the family room of my home in Pittston, opened my laptop and began to write a column. But not just any column. This was to be my first in a brand new publication, an edition of The Citizens’ Voice to be called Greater Pittston Progress.

You know what they say about doors closing, however, and in this case, it wasn’t long before the next one opened. The Citizens’ Voice opened not only its door but also its arms.

The Citizens’ Voice is part of Times-Shamrock Communications, which also publishes the Scranton Times-Tribune, and as I began to write, my mind turned to other newspaper people who had cut their teeth in Pittston and moved on to newspapers in Wilkes-Barre and Scranton. Bill Wagner and Bob Linskey had illustrious careers at The Scranton Times, and John “Ace” O’Malley, Bob Manganiello, and a host of others joined papers in Wilkes-Barre that evolved into today’s Voice. Manganiello made it all the way to publisher.

Most were “kids,” as far as their careers were concerned, when they moved on, but here I was following in their footsteps at the age of 65 when most people are retiring. It was reassuring, however, to know I was not the oldest of the lot to make this move. That honor belonged to Dick Cosgrove, who was in his 70s when he joined The Citizens’ Voice as a columnist and beat writer. Dick and I had worked side by side for my first 23 years in the business.

My goodness, it occurred to me even Bill Watson III, grandson of the founding editor of my previous newspaper, had discovered a happy home at The Voice before moving to Colorado where he still works in the business.

But it was memories of Ace O’Malley that I found most soothing.

Ace was a Pittston newspaper legend. Retired Pittston Area football coach, the now late Bob Barbieri, had often told me the only “write up” he ever got as a high school star at Old Forge was when Ace O’Malley wrote about him.

Ace had been a Silver Star winner in World War II. Despite his slight build, he had risked his life to carry a wounded comrade from the battlefield. “The guy must have owed him money,” former photographer Kenny Feeney quipped upon hearing that story, and I only tell it here because it’s the kind of joke Ace would have cracked about himself.

The enthusiasm Ace brought to his job was trumped only by the enthusiasm he brought to his faith. Ace was a very spiritual guy, and he believed God communicated with us through all sorts of signs. Once, during the early days of The Citizens’ Voice, those difficult months when the paper born from a strike against media giant Capital Cities, struggled on a daily basis, Ace bounded into our Pittston office saying he drove there behind “one of those little Japanese cars” and on the back were the letters CVCC. An early model of Honda, the letters stood for Compound Vortex Controlled Combustion, but Ace saw it differently. To him, it clearly meant: “Citizens’ Voice (CV) in front of Capital Cities (CC).” And it was clearly a message from God.

Ace was like that. And so am I. Signs, which I like to call affirmations, are everywhere, if only we have eyes to see them.

It was a sign, in fact, that caused me to accept the invitation from The Citizens’ Voice and begin my new venture. Before sitting down to write what would be my final column for my previous paper, I had flipped on the television for background, but was paying not a lick of attention to it. I knew there was singing going on, but I was too focused to hear even a word.

When I finally finished writing, I took a sip of my now cold coffee and looked up. There on the TV screen were the words “The Voice.”

I immediately thought of Ace O’Malley and had to smile.

On Nov. 30, 2014, the first issue of Greater Pittston Progress, an edition of The Citizens’ Voice, hit the streets with a column similar to this one on the front page. It’s been here every weekend since.