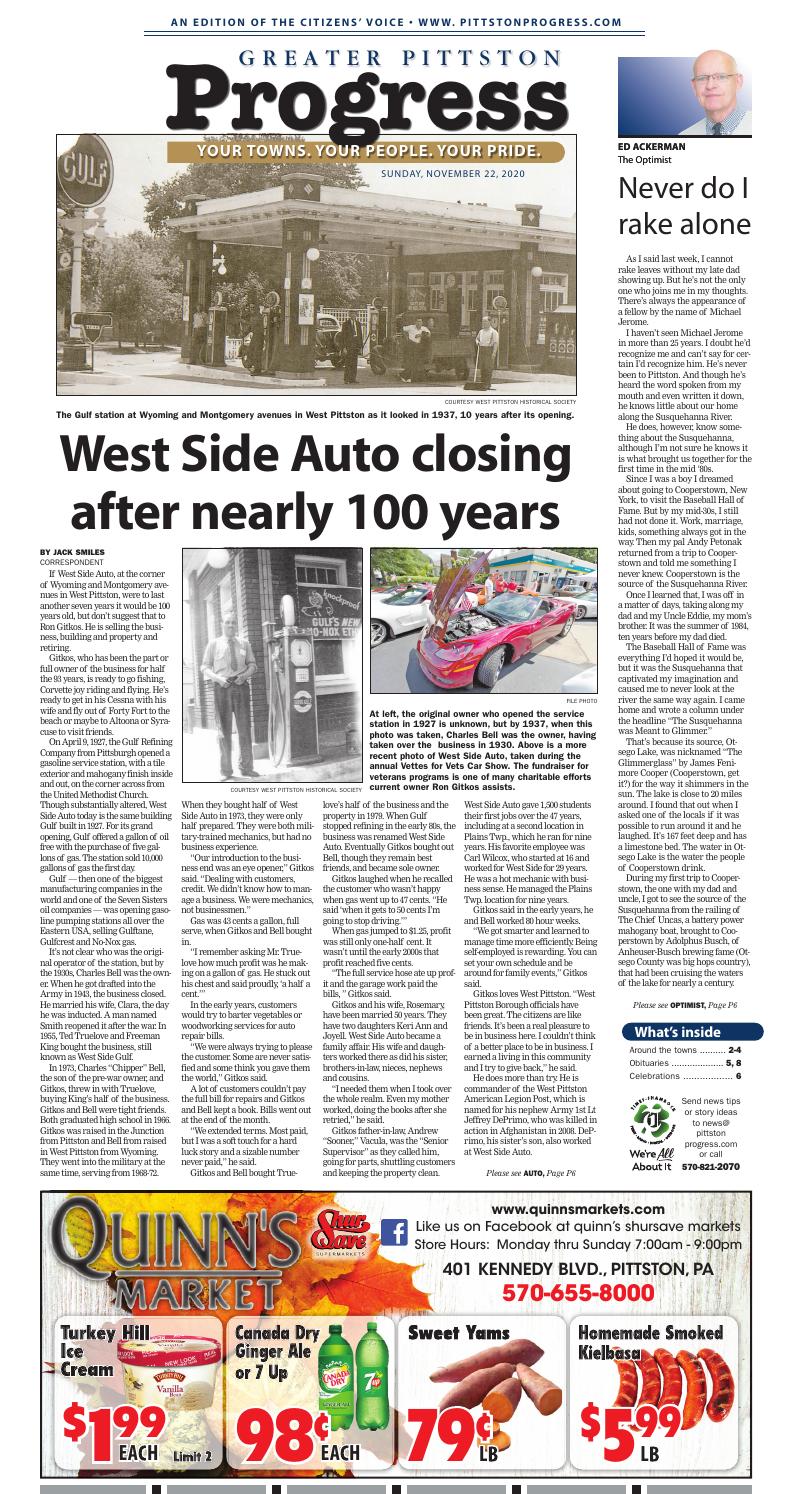 The Gulf station at Wyoming and Montgomery avenues in West Pittston as it looked in 1937, 10 years after its opening.

The original owner who opened the service station in 1927 is unknown, but by 1930, Charles Bell was the owner.

An aerial view of the West Side Auto property at Montgomery and and Wyoming avenues in West Pittston, circa 1937.

At left, the original owner who opened the service station in 1927 is unknown, but by 1937, when this photo was taken, Charles Bell was the owner, having taken over the business in 1930. Above is a more recent photo of West Side Auto, taken during the annual Vettes for Vets Car Show. The fundraiser for veterans programs is one of many charitable efforts current owner Ron Gitkos assists.

Vettes for Vets Car Show at West Side Auto in West Pittston on Saturday, June 14.

Vettes for Vets Car Show at West Side Auto in West Pittston on Saturday, June 14.

If West Side Auto, at the corner of Wyoming and Montgomery avenues in West Pittston, were to last another seven years it would be 100 years old, but don’t suggest that to Ron Gitkos. He is selling the business, building and property and retiring.

Gitkos, who has been the part or full owner of the business for half the 93 years, is ready to go fishing, Corvette joy riding and flying. He’s ready to get in his Cessna with his wife and fly out of Forty Fort to the beach or maybe to Altoona or Syracuse to visit friends.

On April 9, 1927, the Gulf Refining Company from Pittsburgh opened a gasoline service station, with a tile exterior and mahogany finish inside and out, on the corner across from the United Methodist Church. Though substantially altered, West Side Auto today is the same building Gulf built in 1927. For its grand opening, Gulf offered a gallon of oil free with the purchase of five gallons of gas. The station sold 10,000 gallons of gas the first day.

Gulf — then one of the biggest manufacturing companies in the world and one of the Seven Sisters oil companies — was opening gasoline pumping stations all over the Eastern USA, selling Gulftane, Gulfcrest and No-Nox gas.

It’s not clear who was the original operator of the station, but by the 1930s, Charles Bell was the owner. When he got drafted into the Army in 1943, the business closed. He married his wife, Clara, the day he was inducted. A man named Smith reopened it after the war. In 1955, Ted Truelove and Freeman King bought the business, still known as West Side Gulf.

In 1973, Charles “Chipper” Bell, the son of the pre-war owner, and Gitkos, threw in with Truelove, buying King’s half of the business. Gitkos and Bell were tight friends. Both graduated high school in 1966. Gitkos was raised in the Junction from Pittston and Bell from raised in West Pittston from Wyoming. They went into the military at the same time, serving from 1968-72. When they bought half of West Side Auto in 1973, they were only half prepared. They were both military-trained mechanics, but had no business experience.

“Our introduction to the business end was an eye opener,” Gitkos said. “Dealing with customers, credit. We didn’t know how to manage a business. We were mechanics, not businessmen.”

Gas was 43 cents a gallon, full serve, when Gitkos and Bell bought in.

“I remember asking Mr. Truelove how much profit was he making on a gallon of gas. He stuck out his chest and said proudly, ‘a half a cent.’”

In the early years, customers would try to barter vegetables or woodworking services for auto repair bills.

“We were always trying to please the customer. Some are never satisfied and some think you gave them the world,” Gitkos said.

A lot of customers couldn’t pay the full bill for repairs and Gitkos and Bell kept a book. Bills went out at the end of the month.

“We extended terms. Most paid, but I was a soft touch for a hard luck story and a sizable number never paid,” he said.

Gitkos and Bell bought Truelove’s half of the business and the property in 1979. When Gulf stopped refining in the early 80s, the business was renamed West Side Auto. Eventually Gitkos bought out Bell, though they remain best friends, and became sole owner.

Gitkos laughed when he recalled the customer who wasn’t happy when gas went up to 47 cents. “He said ‘when it gets to 50 cents I’m going to stop driving.’”

When gas jumped to $1.25, profit was still only one-half cent. It wasn’t until the early 2000s that profit reached five cents.

“The full service hose ate up profit and the garage work paid the bills, ” Gitkos said.

Gitkos and his wife, Rosemary, have been married 50 years. They have two daughters Keri Ann and Joyell. West Side Auto became a family affair. His wife and daughters worked there as did his sister, brothers-in-law, nieces, nephews and cousins.

“I needed them when I took over the whole realm. Even my mother worked, doing the books after she retried,” he said.

Gitkos father-in-law, Andrew “Sooner,” Vacula, was the “Senior Supervisor” as they called him, going for parts, shuttling customers and keeping the property clean. West Side Auto gave 1,500 students their first jobs over the 47 years, including at a second location in Plains Twp., which he ran for nine years. His favorite employee was Carl Wilcox, who started at 16 and worked for West Side for 29 years. He was a hot mechanic with business sense. He managed the Plains Twp. location for nine years.

Gitkos said in the early years, he and Bell worked 80 hour weeks.

“We got smarter and learned to manage time more efficiently. Being self-employed is rewarding. You can set your own schedule and be around for family events,” Gitkos said.

He does more than try. He is commander of the West Pittston American Legion Post, which is named for his nephew Army 1st Lt Jeffrey DePrimo, who was killed in action in Afghanistan in 2008. DePrimo, his sister’s son, also worked at West Side Auto.

” He is on the West Pittston/Exeter Memorial Day parade committee, sponsor of “Vettes for Vets” to raise money for food pantries, Scouts, Care and Concern Clinic and veterans groups. West Side has sponsored Little League teams in Exeter and West Pittston and donated gas for the leagues for 25 years.

He and his wife are active in Corpus Christi Parish, where he teaches fifth grad CCD classes. “To get away from adults,” he said with a chuckle.

Though some family members suggested he have an open house retirement party, he has another idea — a garage sale. The buyers, who plan a mini-mart, want the building empty, so Gitkos is planning a garage sale as soon as the sale is finalized. He explained a buyer is in place but the closing won’t happen for another month or so.

“In the meantime, it is business as usual at West Side Auto,” he noted.

He has simple advice for budding entrepreneurs. “Two things: honesty and do the best you can.”

As I said last week, I cannot rake leaves without my late dad showing up. But he’s not the only one who joins me in my thoughts. There’s always the appearance of a fellow by the name of Michael Jerome.

I haven’t seen Michael Jerome in more than 25 years. I doubt he’d recognize me and can’t say for certain I’d recognize him. He’s never been to Pittston. And though he’s heard the word spoken from my mouth and even written it down, he knows little about our home along the Susquehanna River.

He does, however, know something about the Susquehanna, although I’m not sure he knows it is what brought us together for the first time in the mid ‘80s.

Since I was a boy I dreamed about going to Cooperstown, New York, to visit the Baseball Hall of Fame. But by my mid-30s, I still had not done it. Work, marriage, kids, something always got in the way. Then my pal Andy Petonak returned from a trip to Cooperstown and told me something I never knew. Cooperstown is the source of the Susquehanna River.

Once I learned that, I was off in a matter of days, taking along my dad and my Uncle Eddie, my mom’s brother. It was the summer of 1984, ten years before my dad died.

The Baseball Hall of Fame was everything I’d hoped it would be, but it was the Susquehanna that captivated my imagination and caused me to never look at the river the same way again. I came home and wrote a column under the headline “The Susquehanna was Meant to Glimmer.”

That’s because its source, Otsego Lake, was nicknamed “The Glimmerglass” by James Fenimore Cooper (Cooperstown, get it?) for the way it shimmers in the sun. The lake is close to 20 miles around. I found that out when I asked one of the locals if it was possible to run around it and he laughed. It’s 167 feet deep and has a limestone bed. The water in Otsego Lake is the water the people of Cooperstown drink.

During my first trip to Cooperstown, the one with my dad and uncle, I got to see the source of the Susquehanna from the railing of The Chief Uncas, a battery power mahogany boat, brought to Cooperstown by Adolphus Busch, of Anheuser-Busch brewing fame (Otsego County was big hops country), that had been cruising the waters of the lake for nearly a century.

The tour guide directed our attention to a large boulder called Council Rock, a meeting place for Native Americans at the time of the Revolutionary War, and next to it a stream flowing from the lake. This is the Susquehanna.

Once I learned the location from the lake it was easy to find it on land. It’s just a couple of blocks from the Hall of Fame. My dad and uncle waited on a bench in Council Rock Park while I made my way down a steep path to the water’s edge and, cupping my hands, took a drink of clear, cold Susquehanna River water. I couldn’t resist. My dad, an old farm boy, said he understood.

My dad enjoyed simple pleasures and surely, I am his son for one of my fondest memories of Cooperstown has nothing to do with baseball or the Susquehanna. It has to do with watching a fellow rake leaves. That fellow was Michael Jerome.

There were no websites in 1984, so I can’t say how I found The Inn at Cooperstown, a B & B where we stayed on that first trip. I may have spotted it in a pamphlet brought back by Andy.

Michael Jerome was the innkeeper. I’m trusting my memory here, but if I am correct, Michael left the world of high finance in New York City for the peace and quiet of the little village on the shores of Otsego Lake. He purchased the old inn that dates to the 1800s, restored it, and then operated it. Our first morning at the Inn, I got up early to go for a run and found Michael Jerome in his bathrobe whipping up blueberry muffins for our breakfast. He was a picture of contentment.

That afternoon, I watched him rake leaves. He was unaware of my presence and I kept it that way. He was the happiest, most peaceful person I had ever seen. And I never forgot it.

I told this story in a blog a few years ago and said I had a heavy heart because I had heard Michael Jerome had passed away. About a year later, he sent me an email to tell me I was wrong. His wife had come across the blog. I actually remember when they got married. He said they sold the Inn in 2003 but still lived in Cooperstown.

“If you thought I was content raking leaves,” he wrote, “you should see me shoveling snow.” 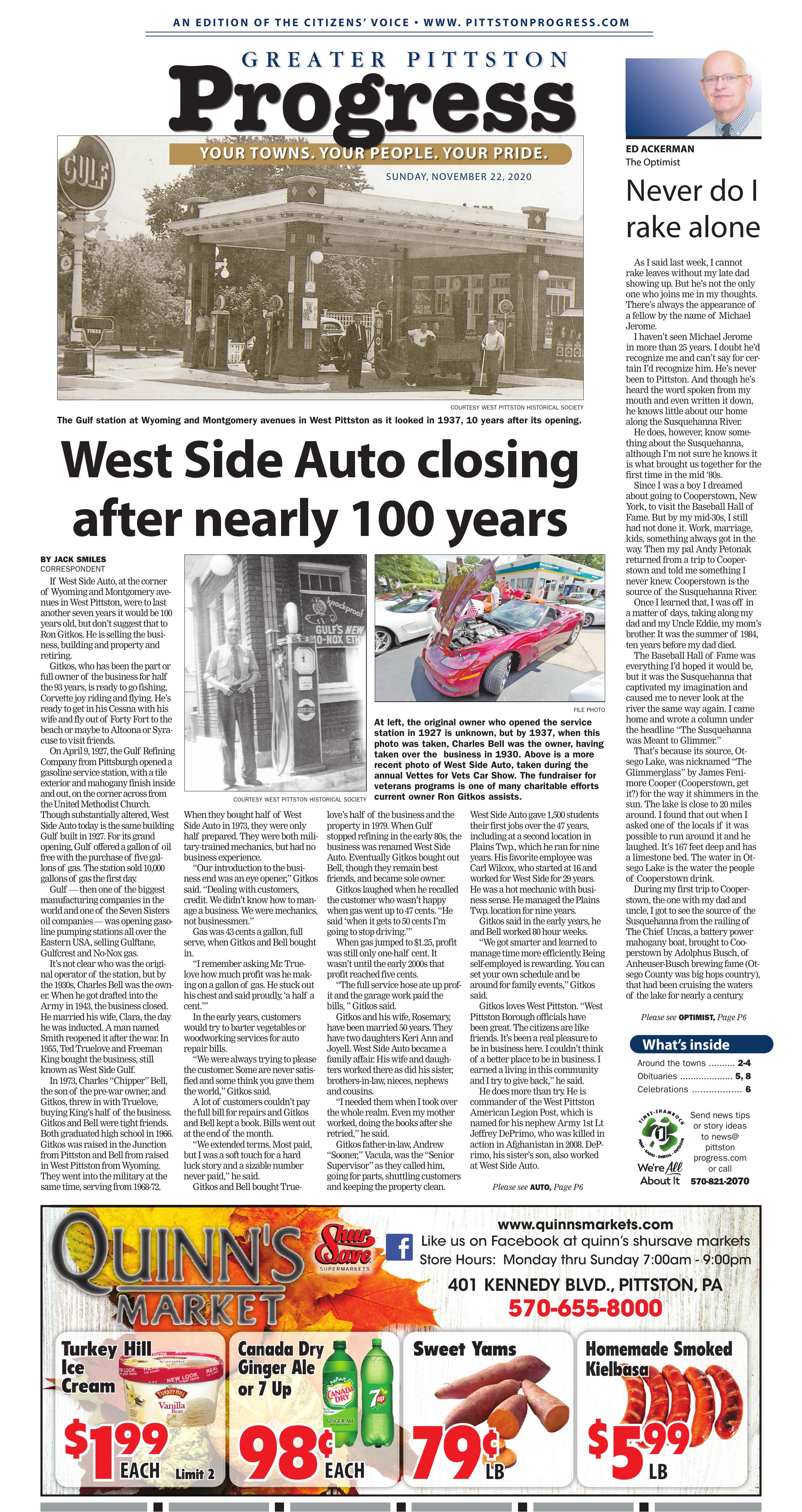