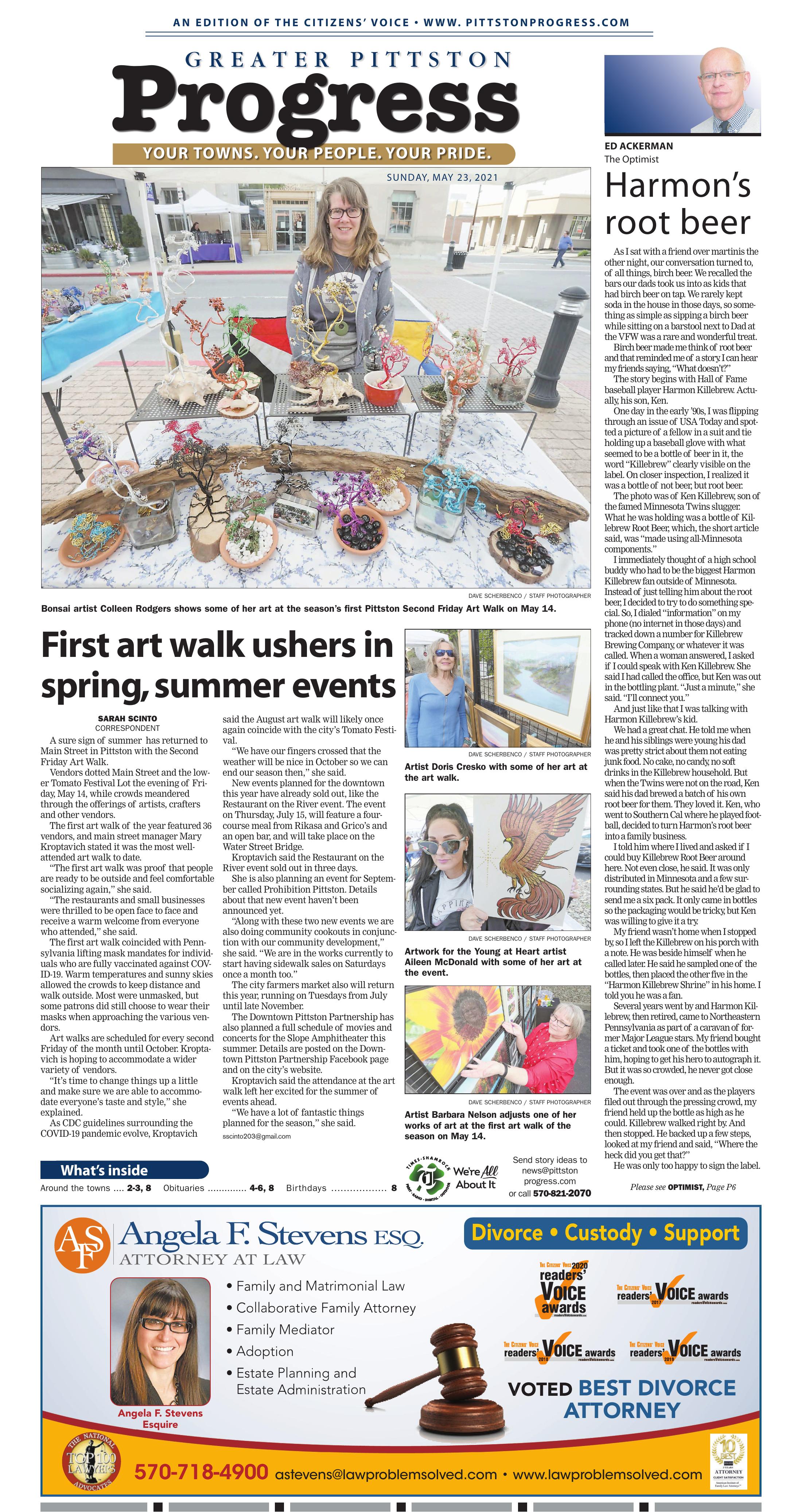 Bonsai artist Colleen Rodgers shows some of her art at the season’s first Pittston Second Friday Art Walk on May 14.

Mary Kate Osick laughs as she gets a henna tattoo from Ashley Lunger at her Hippy Henna Chick stand at the Pittston Second Friday Art Walk.

Artist Barbara Nelson adjusts one of her works of art at the first art walk of the season on May 14.

Artist Doris Cresko with some of her art at the art walk.

Artwork for the Young at Heart artist Aileen McDonald with some of her art at the event.

A sure sign of summer has returned to Main Street in Pittston with the Second Friday Art Walk.

Vendors dotted Main Street and the lower Tomato Festival Lot the evening of Friday, May 14, while crowds meandered through the offerings of artists, crafters and other vendors.

The first art walk of the year featured 36 vendors, and main street manager Mary Kroptavich stated it was the most well-attended art walk to date.

“The first art walk was proof that people are ready to be outside and feel comfortable socializing again,” she said.

“The restaurants and small businesses were thrilled to be open face to face and receive a warm welcome from everyone who attended,” she said.

The first art walk coincided with Pennsylvania lifting mask mandates for individuals who are fully vaccinated against COVID-19. Warm temperatures and sunny skies allowed the crowds to keep distance and walk outside. Most were unmasked, but some patrons did still choose to wear their masks when approaching the various vendors.

Art walks are scheduled for every second Friday of the month until October. Kroptavich is hoping to accommodate a wider variety of vendors.

“It’s time to change things up a little and make sure we are able to accommodate everyone’s taste and style,” she explained.

“We have our fingers crossed that the weather will be nice in October so we can end our season then,” she said.

New events planned for the downtown this year have already sold out, like the Restaurant on the River event. The event on Thursday, July 15, will feature a four-course meal from Rikasa and Grico’s and an open bar, and will take place on the Water Street Bridge.

Kroptavich said the Restaurant on the River event sold out in three days.

She is also planning an event for September called Prohibition Pittston. Details about that new event haven’t been announced yet.

“Along with these two new events we are also doing community cookouts in conjunction with our community development,” she said. “We are in the works currently to start having sidewalk sales on Saturdays once a month too.”

The city farmers market also will return this year, running on Tuesdays from July until late November.

Kroptavich said the attendance at the art walk left her excited for the summer of events ahead.

“We have a lot of fantastic things planned for the season,” she said.

As I sat with a friend over martinis the other night, our conversation turned to, of all things, birch beer. We recalled the bars our dads took us into as kids that had birch beer on tap. We rarely kept soda in the house in those days, so something as simple as sipping a birch beer while sitting on a barstool next to Dad at the VFW was a rare and wonderful treat.

Birch beer made me think of root beer and that reminded me of a story. I can hear my friends saying, “What doesn’t?”

One day in the early ’90s, I was flipping through an issue of USA Today and spotted a picture of a fellow in a suit and tie holding up a baseball glove with what seemed to be a bottle of beer in it, the word “Killebrew” clearly visible on the label. On closer inspection, I realized it was a bottle of not beer, but root beer.

The photo was of Ken Killebrew, son of the famed Minnesota Twins slugger. What he was holding was a bottle of Killebrew Root Beer, which, the short article said, was “made using all-Minnesota components.”

I immediately thought of a high school buddy who had to be the biggest Harmon Killebrew fan outside of Minnesota. Instead of just telling him about the root beer, I decided to try to do something special. So, I dialed “information” on my phone (no internet in those days) and tracked down a number for Killebrew Brewing Company, or whatever it was called. When a woman answered, I asked if I could speak with Ken Killebrew. She said I had called the office, but Ken was out in the bottling plant. “Just a minute,” she said. “I’ll connect you.”

And just like that I was talking with Harmon Killebrew’s kid.

We had a great chat. He told me when he and his siblings were young his dad was pretty strict about them not eating junk food. No cake, no candy, no soft drinks in the Killebrew household. But when the Twins were not on the road, Ken said his dad brewed a batch of his own root beer for them. They loved it. Ken, who went to Southern Cal where he played football, decided to turn Harmon’s root beer into a family business.

I told him where I lived and asked if I could buy Killebrew Root Beer around here. Not even close, he said. It was only distributed in Minnesota and a few surrounding states. But he said he’d be glad to send me a six pack. It only came in bottles so the packaging would be tricky, but Ken was willing to give it a try.

My friend wasn’t home when I stopped by, so I left the Killebrew on his porch with a note. He was beside himself when he called later. He said he sampled one of the bottles, then placed the other five in the “Harmon Killebrew Shrine” in his home. I told you he was a fan.

Several years went by and Harmon Killebrew, then retired, came to Northeastern Pennsylvania as part of a caravan of former Major League stars. My friend bought a ticket and took one of the bottles with him, hoping to get his hero to autograph it. But it was so crowded, he never got close enough.

The event was over and as the players filed out through the pressing crowd, my friend held up the bottle as high as he could. Killebrew walked right by. And then stopped. He backed up a few steps, looked at my friend and said, “Where the heck did you get that?”

He was only too happy to sign the label.

After telling this to my buddy, I put down my martini and picked up my phone to type in a reminder to write this very column you are reading. But when I typed in Killebrew, the auto-correct feature changed it to “Kile Reed.” That’s so sad. Harmon Killebrew hit 573 home runs, was named to 13 All Star teams and was inducted into the Baseball Hall of Fame. I wonder how many homers this Kile Reed hit. And if he ever brewed even one glass of root beer.

Ed Ackerman writes The Optimist. Look for his blogs online at pittstonprogress.com