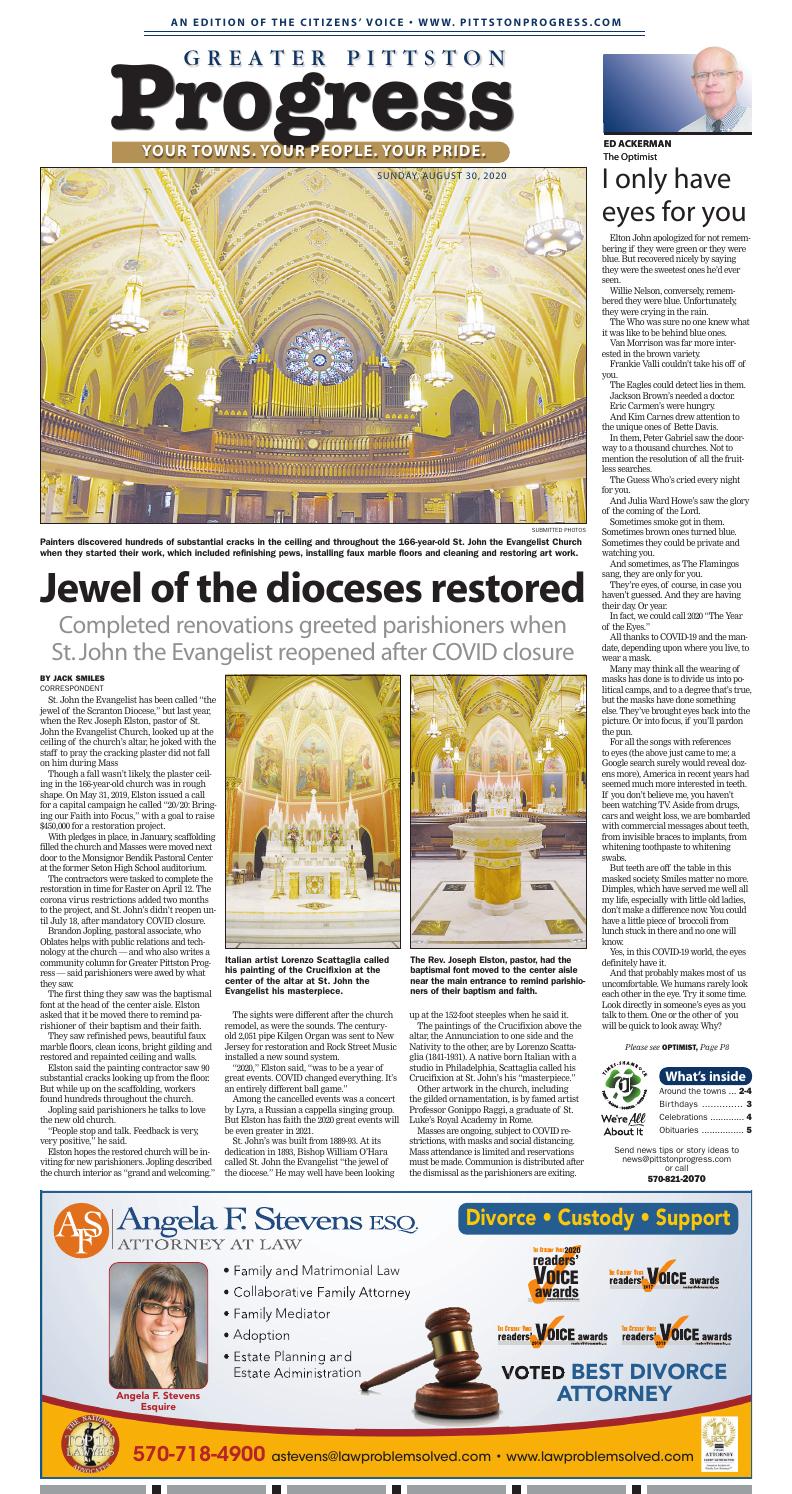 Italian artist Lorenzo Scattaglia called his painting of the Crucifixion at the center of the altar at St. John the Evangelist his masterpiece.

Painters discovered hundreds of substantial cracks in the ceiling and throughout the 166-year-old St. John the Evangelist Church when they started their work, which included refinishing pews, installing faux marble floors and cleaning and restoring art work.

The Rev. Joseph Elston, pastor, had the baptismal font moved to the center aisle near the main entrance to remind parishioners of their baptism and faith.

With pledges in place, in January, scaffolding filled the church and Masses were moved next door to the Monsignor Bendik Pastoral Center at the former Seton High School auditorium.

The contractors were tasked to complete the restoration in time for Easter on April 12. The corona virus restrictions added two months to the project, and St. John’s didn’t reopen until July 18, after mandatory COVID closure.

Brandon Jopling, pastoral associate, who Oblates helps with public relations and technology at the church — and who also writes a community column for Greater Pittston Progress — said parishioners were awed by what they saw.

The first thing they saw was the baptismal font at the head of the center aisle. Elston asked that it be moved there to remind parishioner of their baptism and their faith.

Elston said the painting contractor saw 90 substantial cracks looking up from the floor. But while up on the scaffolding, workers found hundreds throughout the church.

Elston hopes the restored church will be inviting for new parishioners. Jopling described the church interior as “grand and welcoming.”

The sights were different after the church remodel, as were the sounds. The century-old 2,051 pipe Kilgen Organ was sent to New Jersey for restoration and Rock Street Music installed a new sound system.

“2020,” Elston said, “was to be a year of great events. COVID changed everything. It’s an entirely different ball game.”

Among the cancelled events was a concert by Lyra, a Russian a cappella singing group. But Elston has faith the 2020 great events will be even greater in 2021.

St. John’s was built from 1889-93. At its dedication in 1893, Bishop William O’Hara called St. John the Evangelist “the jewel of the diocese.” He may well have been looking up at the 152-foot steeples when he said it.

The paintings of the Crucifixion above the altar, the Annunciation to one side and the Nativity to the other, are by Lorenzo Scattaglia (1841-1931). A native born Italian with a studio in Philadelphia, Scattaglia called his Crucifixion at St. John’s his “masterpiece.”

Other artwork in the church, including the gilded ornamentation, is by famed artist Professor Gonippo Raggi, a graduate of St. Luke’s Royal Academy in Rome.

Masses are ongoing, subject to COVID restrictions, with masks and social distancing. Mass attendance is limited and reservations must be made. Communion is distributed after the dismissal as the parishioners are exiting.

The_optimist
I only have eyes for you

Elton John apologized for not remembering if they were green or they were blue. But recovered nicely by saying they were the sweetest ones he’d ever seen.

Willie Nelson, conversely, remembered they were blue. Unfortunately, they were crying in the rain.

The Who was sure no one knew what it was like to be behind blue ones.

Van Morrison was far more interested in the brown variety.

Frankie Valli couldn’t take his off of you.

The Eagles could detect lies in them.

And Kim Carnes drew attention to the unique ones of Bette Davis.

In them, Peter Gabriel saw the doorway to a thousand churches. Not to mention the resolution of all the fruitless searches.

The Guess Who’s cried every night for you.

And Julia Ward Howe’s saw the glory of the coming of the Lord.

Sometimes smoke got in them. Sometimes brown ones turned blue. Sometimes they could be private and watching you.

And sometimes, as The Flamingos sang, they are only for you.

They’re eyes, of course, in case you haven’t guessed. And they are having their day. Or year.

All thanks to COVID-19 and the mandate, depending upon where you live, to wear a mask.

Many may think all the wearing of masks has done is to divide us into political camps, and to a degree that’s true, but the masks have done something else. They’ve brought eyes back into the picture. Or into focus, if you’ll pardon the pun.

For all the songs with references to eyes (the above just came to me; a Google search surely would reveal dozens more), America in recent years had seemed much more interested in teeth. If you don’t believe me, you haven’t been watching TV. Aside from drugs, cars and weight loss, we are bombarded with commercial messages about teeth, from invisible braces to implants, from whitening toothpaste to whitening swabs.

But teeth are off the table in this masked society. Smiles matter no more. Dimples, which have served me well all my life, especially with little old ladies, don’t make a difference now. You could have a little piece of broccoli from lunch stuck in there and no one will know.

Yes, in this COVID-19 world, the eyes definitely have it.

And that probably makes most of us uncomfortable. We humans rarely look each other in the eye. Try it some time. Look directly in someone’s eyes as you talk to them. One or the other of you will be quick to look away. Why?

St. Jerome may have had the answer when he said, “… the eyes without speaking confess the secrets of the heart.” That’s terrifying.

Or how about this from author William Henry: “The eyes shout what the lips fear to say.” Yikes! Where’s my sunglasses?

But since, like it or not, masks will be with us for a while, we’d better learn, as Mr. Miyagi teaches Daniel-san in The Karate Kid to, “Look eye. Always look eye.”

I’m starting by usurping a line from my department chair at the college, Sujanet Mason. We were walking across campus about a month ago and as a masked colleague approached, she greeted her with, “I’d recognize those eyes anywhere.” “Oooo,” I said, “I’m stealing that.” And I have. Even when I haven’t the foggiest to whom I am speaking.

More significantly, I now am more able to accept an observation from Anthony Bourdain. In his book “Kitchen Confidential,” Bourdain writes, “Every man at 50 gets the face he deserves.” One look in the mirror tells me he’s right. I do have the face I deserve. But with a mask on, the world only sees half of it.

Ed Ackerman writes The Optimist every week. Look for his blogs at pittstonprogress.com. 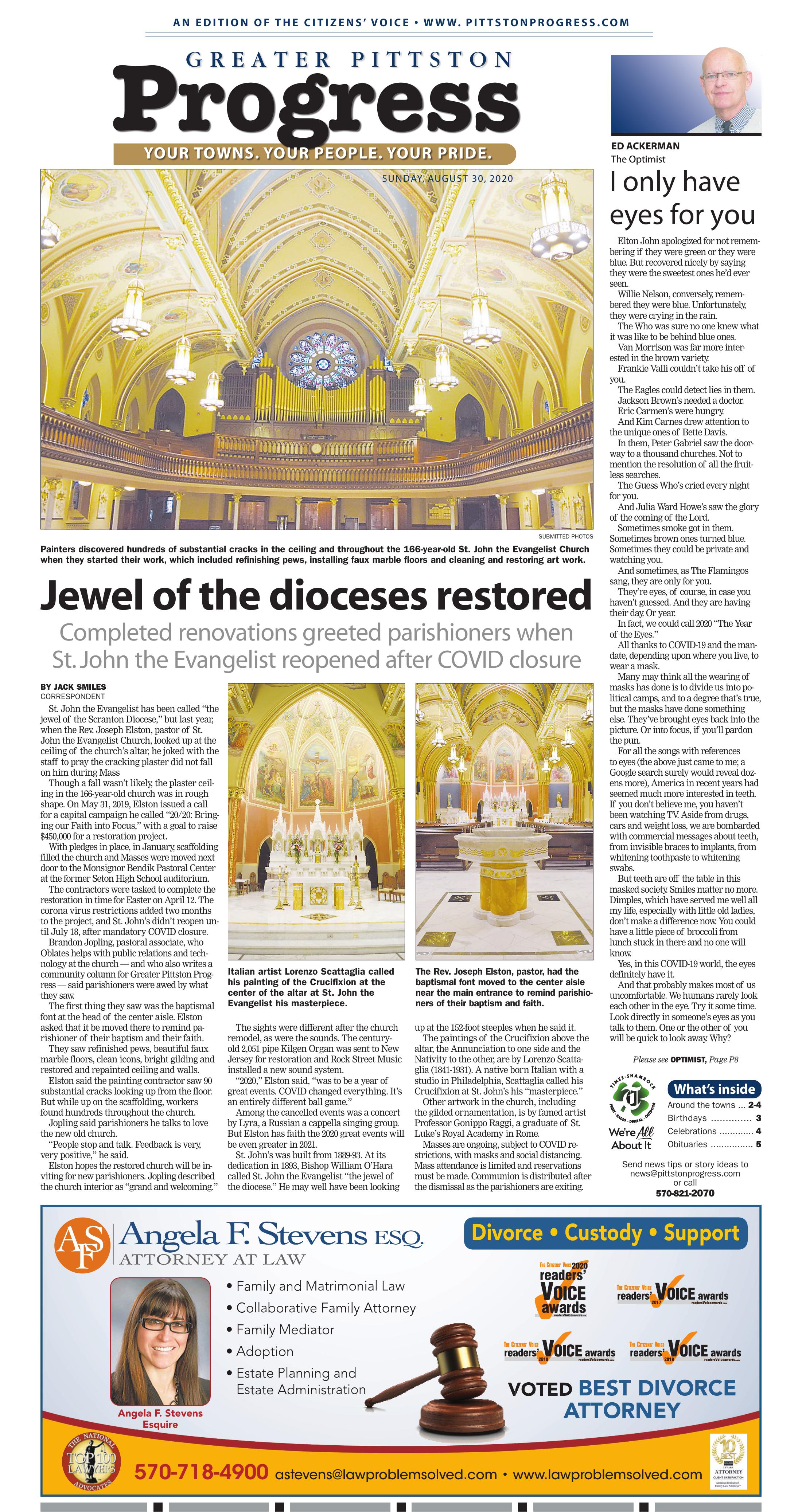