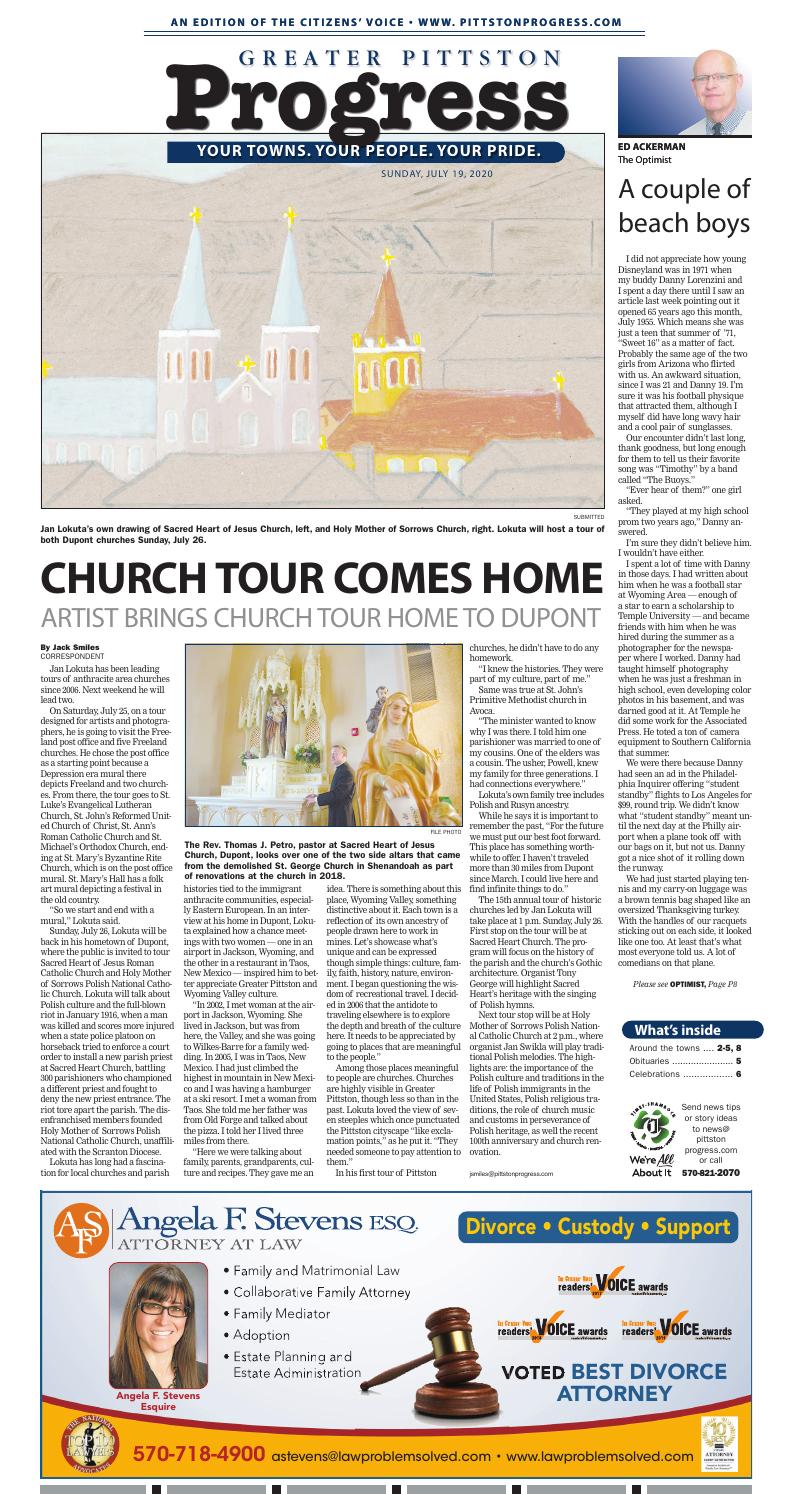 Jan Lokuta has been leading tours of anthracite area churches since 2006. Next weekend he will lead two.

On Saturday, July 25, on a tour designed for artists and photographers, he is going to visit the Freeland post office and five Freeland churches. He chose the post office as a starting point because a Depression era mural there depicts Freeland and two churches. From there, the tour goes to St. Luke’s Evangelical Lutheran Church, St. John’s Reformed United Church of Christ, St. Ann’s Roman Catholic Church and St. Michael’s Orthodox Church, ending at St. Mary’s Byzantine Rite Church, which is on the post office mural. St. Mary’s Hall has a folk art mural depicting a festival in the old country.

“So we start and end with a mural,” Lokuta said.

Sunday, July 26, Lokuta will be back in his hometown of Dupont, where the public is invited to tour Sacred Heart of Jesus Roman Catholic Church and Holy Mother of Sorrows Polish National Catholic Church. Lokuta will talk about Polish culture and the full-blown riot in January 1916, when a man was killed and scores more injured when a state police platoon on horseback tried to enforce a court order to install a new parish priest at Sacred Heart Church, battling 300 parishioners who championed a different priest and fought to deny the new priest entrance. The riot tore apart the parish. The disenfranchised members founded Holy Mother of Sorrows Polish National Catholic Church, unaffiliated with the Scranton Diocese.

Lokuta has long had a fascination for local churches and parish histories tied to the immigrant anthracite communities, especially Eastern European. In an interview at his home in Dupont, Lokuta explained how a chance meetings with two women — one in an airport in Jackson, Wyoming, and the other in a restaurant in Taos, New Mexico — inspired him to better appreciate Greater Pittston and Wyoming Valley culture.

“In 2002, I met woman at the airport in Jackson, Wyoming. She lived in Jackson, but was from here, the Valley, and she was going to Wilkes-Barre for a family wedding. In 2005, I was in Taos, New Mexico. I had just climbed the highest in mountain in New Mexico and I was having a hamburger at a ski resort. I met a woman from Taos. She told me her father was from Old Forge and talked about the pizza. I told her I lived three miles from there.

“Here we were talking about family, parents, grandparents, culture and recipes. They gave me an idea. There is something about this place, Wyoming Valley, something distinctive about it. Each town is a reflection of its own ancestry of people drawn here to work in mines. Let’s showcase what’s unique and can be expressed though simple things: culture, family, faith, history, nature, environment. I began questioning the wisdom of recreational travel. I decided in 2006 that the antidote to traveling elsewhere is to explore the depth and breath of the culture here. It needs to be appreciated by going to places that are meaningful to the people.”

Among those places meaningful to people are churches. Churches are highly visible in Greater Pittston, though less so than in the past. Lokuta loved the view of seven steeples which once punctuated the Pittston cityscape “like exclamation points,” as he put it. “They needed someone to pay attention to them.”

In his first tour of Pittston churches, he didn’t have to do any homework.

“I knew the histories. They were part of my culture, part of me.”

“The minister wanted to know why I was there. I told him one parishioner was married to one of my cousins. One of the elders was a cousin. The usher, Powell, knew my family for three generations. I had connections everywhere.”

While he says it is important to remember the past, “For the future we must put our best foot forward. This place has something worthwhile to offer. I haven’t traveled more than 30 miles from Dupont since March. I could live here and find infinite things to do.”

The 15th annual tour of historic churches led by Jan Lokuta will take place at 1 p.m. Sunday, July 26. First stop on the tour will be at Sacred Heart Church. The program will focus on the history of the parish and the church’s Gothic architecture. Organist Tony George will highlight Sacred Heart’s heritage with the singing of Polish hymns.

Next tour stop will be at Holy Mother of Sorrows Polish National Catholic Church at 2 p.m., where organist Jan Swikla will play traditional Polish melodies. The highlights are: the importance of the Polish culture and traditions in the life of Polish immigrants in the United States, Polish religious traditions, the role of church music and customs in perseverance of Polish heritage, as well the recent 100th anniversary and church renovation.

I did not appreciate how young Disneyland was in 1971 when my buddy Danny Lorenzini and I spent a day there until I saw an article last week pointing out it opened 65 years ago this month, July 1955. Which means she was just a teen that summer of ’71, “Sweet 16” as a matter of fact. Probably the same age of the two girls from Arizona who flirted with us. An awkward situation, since I was 21 and Danny 19. I’m sure it was his football physique that attracted them, although I myself did have long wavy hair and a cool pair of sunglasses.

Our encounter didn’t last long, thank goodness, but long enough for them to tell us their favorite song was “Timothy” by a band called “The Buoys.”

“Ever hear of them?” one girl asked.

“They played at my high school prom two years ago,” Danny answered.

I’m sure they didn’t believe him. I wouldn’t have either.

I spent a lot of time with Danny in those days. I had written about him when he was a football star at Wyoming Area — enough of a star to earn a scholarship to Temple University — and became friends with him when he was hired during the summer as a photographer for the newspaper where I worked. Danny had taught himself photography when he was just a freshman in high school, even developing color photos in his basement, and was darned good at it. At Temple he did some work for the Associated Press. He toted a ton of camera equipment to Southern California that summer.

We were there because Danny had seen an ad in the Philadelphia Inquirer offering “student standby” flights to Los Angeles for $99, round trip. We didn’t know what “student standby” meant until the next day at the Philly airport when a plane took off with our bags on it, but not us. Danny got a nice shot of it rolling down the runway.

We had just started playing tennis and my carry-on luggage was a brown tennis bag shaped like an oversized Thanksgiving turkey. With the handles of our racquets sticking out on each side, it looked like one too. At least that’s what most everyone told us. A lot of comedians on that plane.

Danny’s brother David, an architect with a wife and kids, lived in Costa Mesa and was willing to let us use his house as a home base. The plan was to fly to LAX and then take a commuter to Orange County Airport where David would pick us up.

Everything was smooth once we finally got on a flight in Philly. That commuter from LAX was barely in the air when it landed.

Danny and I got off and grabbed a coke from a machine in the little airport lobby when he said, “Let’s surprise David and hitchhike to his house.”

Sounded good to me.

“Which way is Costa Mesa?” I asked the guy at the counter.

“You’re gonna hitchhike all the way to Costa Mesa?” the guy answered. “Why didn’t you stay on the plane to Orange County?”

Danny and I looked at each other.

Fullerton, we learned, was about halfway between LA and Costa Mesa. Very few people ever got off a plane or boarded one at Fullerton. Fortunately there were two empty seats on the very next flight. We made no eye contact with the other passengers as we slid into those seats.

We did wind up hitchhiking all over Southern California and nothing, perhaps, illustrates the difference between those times and these than that. Drivers pulled over and picked us up almost as soon as we stuck out our thumbs, including a guy and his girlfriend in a convertible one night at midnight.

The only time it didn’t pan out was the night of our Disneyland excursion.

Danny’s brother dropped us off. We told him not to worry, we’d hitchhike home. Except there wasn’t a car on the road when we left the park.

Things like MasterCards were around then but kids like us didn’t have them. Danny did have a BP (British Petroleum) gas card his dad insisted on him taking along, and we found out we could get a motel room with it. (I forgot to mention we had left for LA with about two hundred bucks apiece in our jeans pockets.) We also used it the next day to rent a car, a little green Chevy Vega. If those young Arizona girls had seen us in that vehicle they would have run the other way.

Our bumpkinness followed us wherever we went, including the day we needed to return the car and catch our flight back home.

We couldn’t find the rental place. Danny was driving when I spotted the sign on the other side of the highway. He did a U-turn across four lanes, which was quite a feat, and one not lost on the Highway Patrol officer who pulled us over. Danny’s little boy charm paid off and the policeman not only let us off with a warning, but told us to follow him to the airport.

“Maggie May” by Rod Stewart came out that summer and seemed to be on the radio whenever we were in the car. Every time I’ve heard it since I am back in that little Vega with Danny, sipping an Orange Julius, cruising along the Pacific Coast Highway and feeling about as carefree as ever I have.

Ed Ackerman writes The Optimist every week for Greater Pittston Progress. Look for his blogs online at pittstonprogress.com. 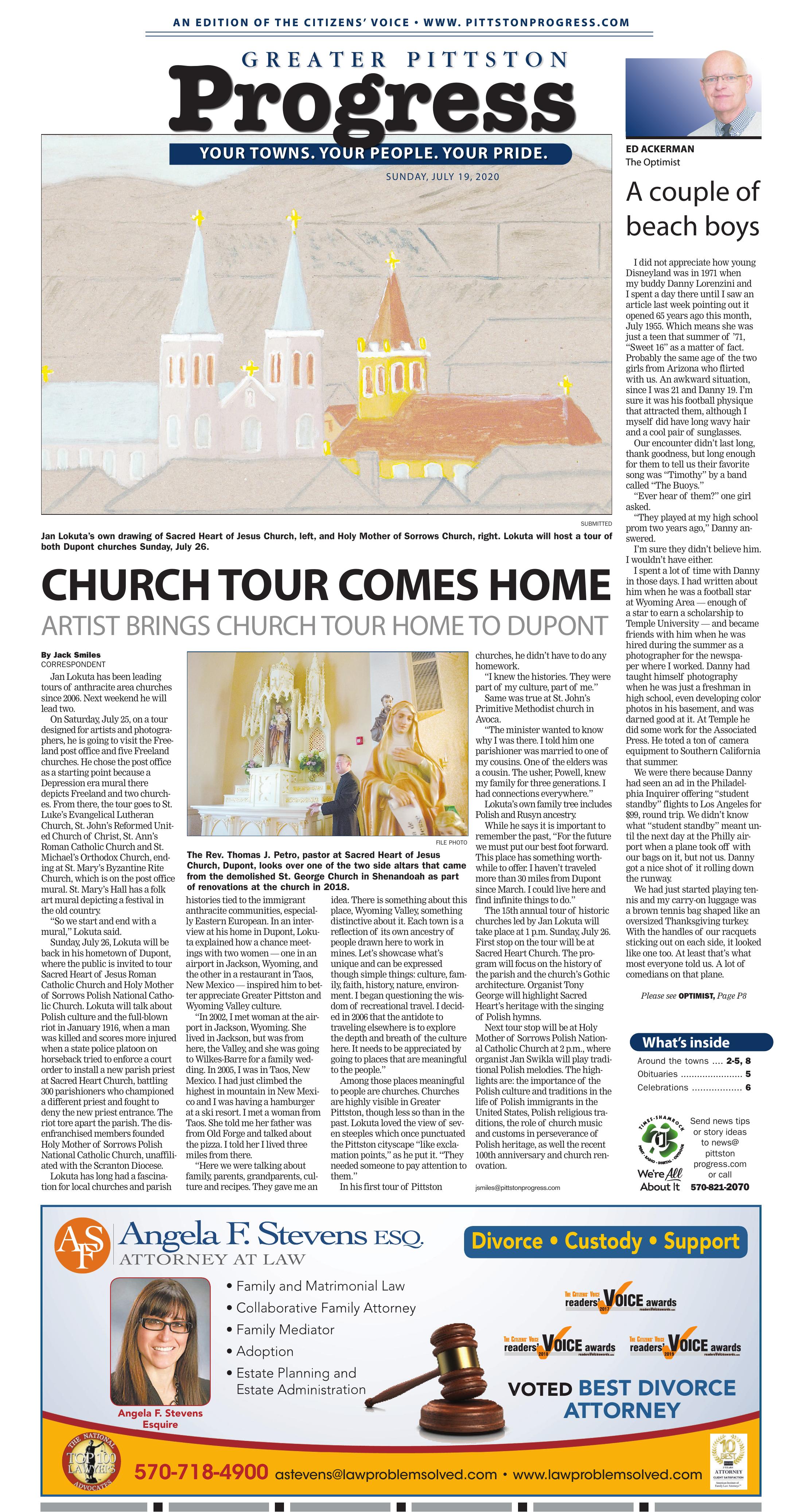