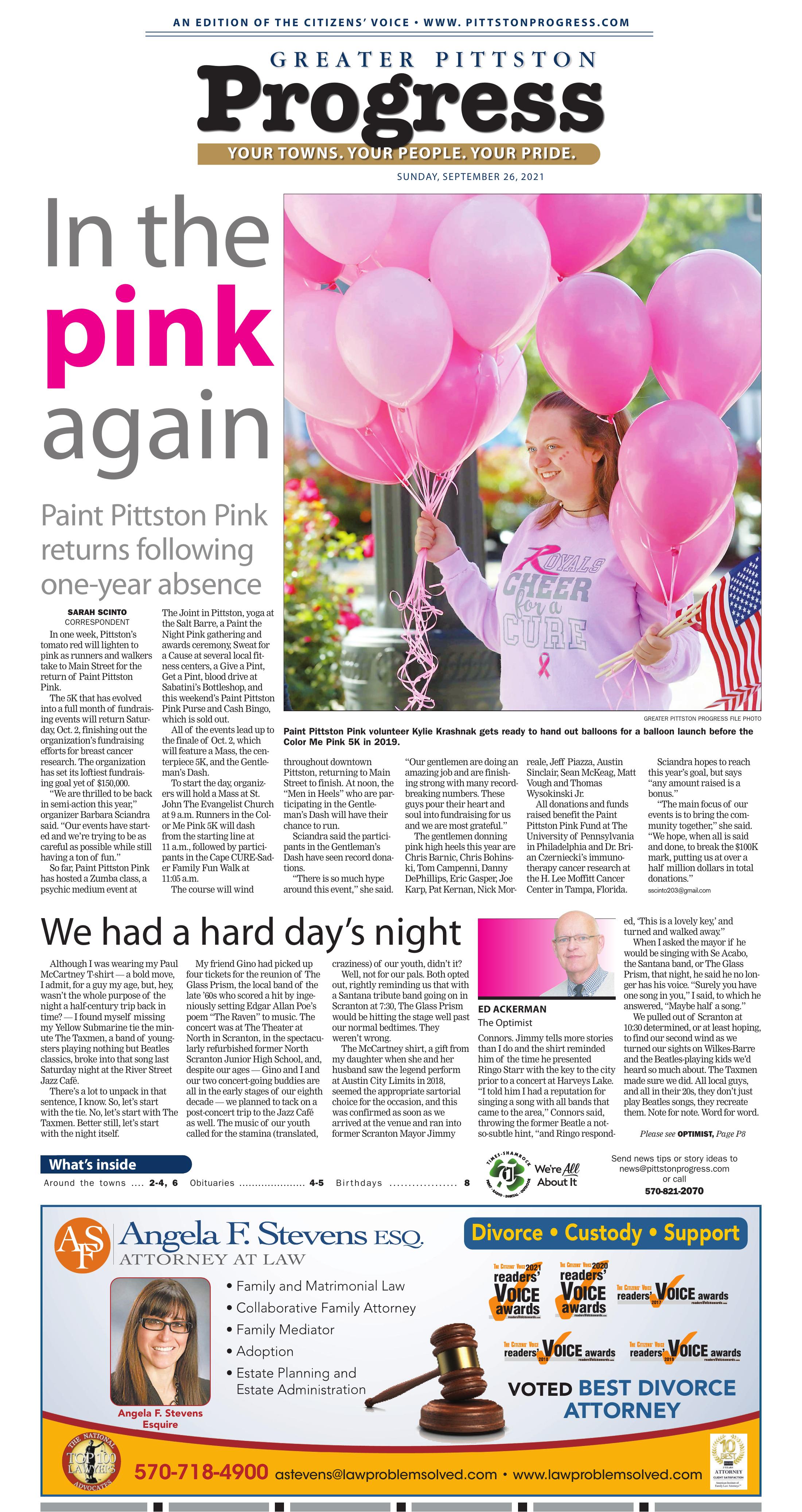 Paint Pittston Pink volunteer Kylie Krashnak gets ready to hand out balloons for a balloon launch before the Color Me Pink 5K in 2019.

The Citizens' Voice File Paint Pittston Pink Gentlemen's Dash participants get ready for their race in 2019.

Runners make their way thru a cloud of pink dust at the end of the 5k during Paint Pittston Pink. cv13paint1 DAVE SCHERBNECO/CITIZENS VOICE

In one week, Pittston’s tomato red will lighten to pink as runners and walkers take to Main Street for the return of Paint Pittston Pink.

“We are thrilled to be back in semi-action this year,” organizer Barbara Sciandra said. “Our events have started and we’re trying to be as careful as possible while still having a ton of fun.”

So far, Paint Pittston Pink has hosted a Zumba class, a psychic medium event at The Joint in Pittston, yoga at the Salt Barre, a Paint the Night Pink gathering and awards ceremony, Sweat for a Cause at several local fitness centers, a Give a Pint, Get a Pint, blood drive at Sabatini’s Bottleshop, and this weekend’s Paint Pittston Pink Purse and Cash Bingo, which is sold out.

All of the events lead up to the finale of Oct. 2, which will feature a Mass, the centerpiece 5K, and the Gentleman’s Dash.

To start the day, organizers will hold a Mass at St. John The Evangelist Church at 9 a.m. Runners in the Color Me Pink 5K will dash from the starting line at 11 a.m., followed by participants in the Cape CURE-Sader Family Fun Walk at 11:05 a.m.

The course will wind throughout downtown Pittston, returning to Main Street to finish. At noon, the “Men in Heels” who are participating in the Gentleman’s Dash will have their chance to run.

Sciandra said the participants in the Gentleman’s Dash have seen record donations.

“There is so much hype around this event,” she said. “Our gentlemen are doing an amazing job and are finishing strong with many record-breaking numbers. These guys pour their heart and soul into fundraising for us and we are most grateful.”

All donations and funds raised benefit the Paint Pittston Pink Fund at The University of Pennsylvania in Philadelphia and Dr. Brian Czerniecki’s immunotherapy cancer research at the H. Lee Moffitt Cancer Center in Tampa, Florida.

Sciandra hopes to reach this year’s goal, but says “any amount raised is a bonus.”

“The main focus of our events is to bring the community together,” she said. “We hope, when all is said and done, to break the $100K mark, putting us at over a half million dollars in total donations.”

Although I was wearing my Paul McCartney T-shirt — a bold move, I admit, for a guy my age, but, hey, wasn’t the whole purpose of the night a half-century trip back in time? — I found myself missing my Yellow Submarine tie the minute The Taxmen, a band of youngsters playing nothing but Beatles classics, broke into that song last Saturday night at the River Street Jazz Café.

My friend Gino had picked up four tickets for the reunion of The Glass Prism, the local band of the late ’60s who scored a hit by ingeniously setting Edgar Allan Poe’s poem “The Raven” to music. The concert was at The Theater at North in Scranton, in the spectacularly refurbished former North Scranton Junior High School, and, despite our ages — Gino and I and our two concert-going buddies are all in the early stages of our eighth decade — we planned to tack on a post-concert trip to the Jazz Café as well. The music of our youth called for the stamina (translated, craziness) of our youth, didn’t it?

Well, not for our pals. Both opted out, rightly reminding us that with a Santana tribute band going on in Scranton at 7:30, The Glass Prism would be hitting the stage well past our normal bedtimes. They weren’t wrong.

The McCartney shirt, a gift from my daughter when she and her husband saw the legend perform at Austin City Limits in 2018, seemed the appropriate sartorial choice for the occasion, and this was confirmed as soon as we arrived at the venue and ran into former Scranton Mayor Jimmy Connors. Jimmy tells more stories than I do and the shirt reminded him of the time he presented Ringo Starr with the key to the city prior to a concert at Harveys Lake. “I told him I had a reputation for singing a song with all bands that came to the area,” Connors said, throwing the former Beatle a not-so-subtle hint, “and Ringo responded, ‘This is a lovely key,’ and turned and walked away.”

When I asked the mayor if he would be singing with Se Acabo, the Santana band, or The Glass Prism, that night, he said he no longer has his voice. “Surely you have one song in you,” I said, to which he answered, “Maybe half a song.”

We pulled out of Scranton at 10:30 determined, or at least hoping, to find our second wind as we turned our sights on Wilkes-Barre and the Beatles-playing kids we’d heard so much about. The Taxmen made sure we did. All local guys, and all in their 20s, they don’t just play Beatles songs, they recreate them. Note for note. Word for word.

The first song we heard from them was “Paperback Writer,” which like everything they play came out nearly 40 years before any of them were born. I had a “Paperback Writer” tie, too. And a “Penny Lane” one which I took off one day and gave to a student named Penny. She cried and said her dad, whom she rarely saw those days, used to call her “Penny Lane” when she was little. I can’t recall who wound up with my “Paperback Writer” and “Yellow Submarine” ties but I gave them away too.

The “Yellow Submarine” one makes me think of my friend and fellow writer Jack Smiles. I barely knew Jack when I became his editor in 2000. Jack was in the room when I called the newspaper staff together for our first meeting. He later wrote that I was wearing a “Yellow Submarine” tie that day which sent him into a reverie and he didn’t hear a word I said. But when I suggested a story for him, he promptly went out and did it. “Which only proves,” he wrote, “that when dealing with a potentially unruly employee, it is always important to wear the right tie.”

It was well after 1 a.m. when The Taxmen hit the final note of “Day Tripper,” their encore after “Hey Jude,” and I wondered where the night had gone. I long ago realized that I am happiest when time disappears. That happens when I’m engrossed in a book or a movie, when I’m immersed in conversation with friends, when I’m cradling a sleeping baby in my arms, or when I’m lost in musical memories.

That’s what happened Saturday night, beginning with Se Acabo and The Glass Prism in Scranton and ending with The Taxmen in Wilkes-Barre. And it wasn’t just six hours that disappeared. It was more than 50 years.

Ed Ackerman writes The Optimist. Look for his blogs online during the week at pittstonprogress.com.