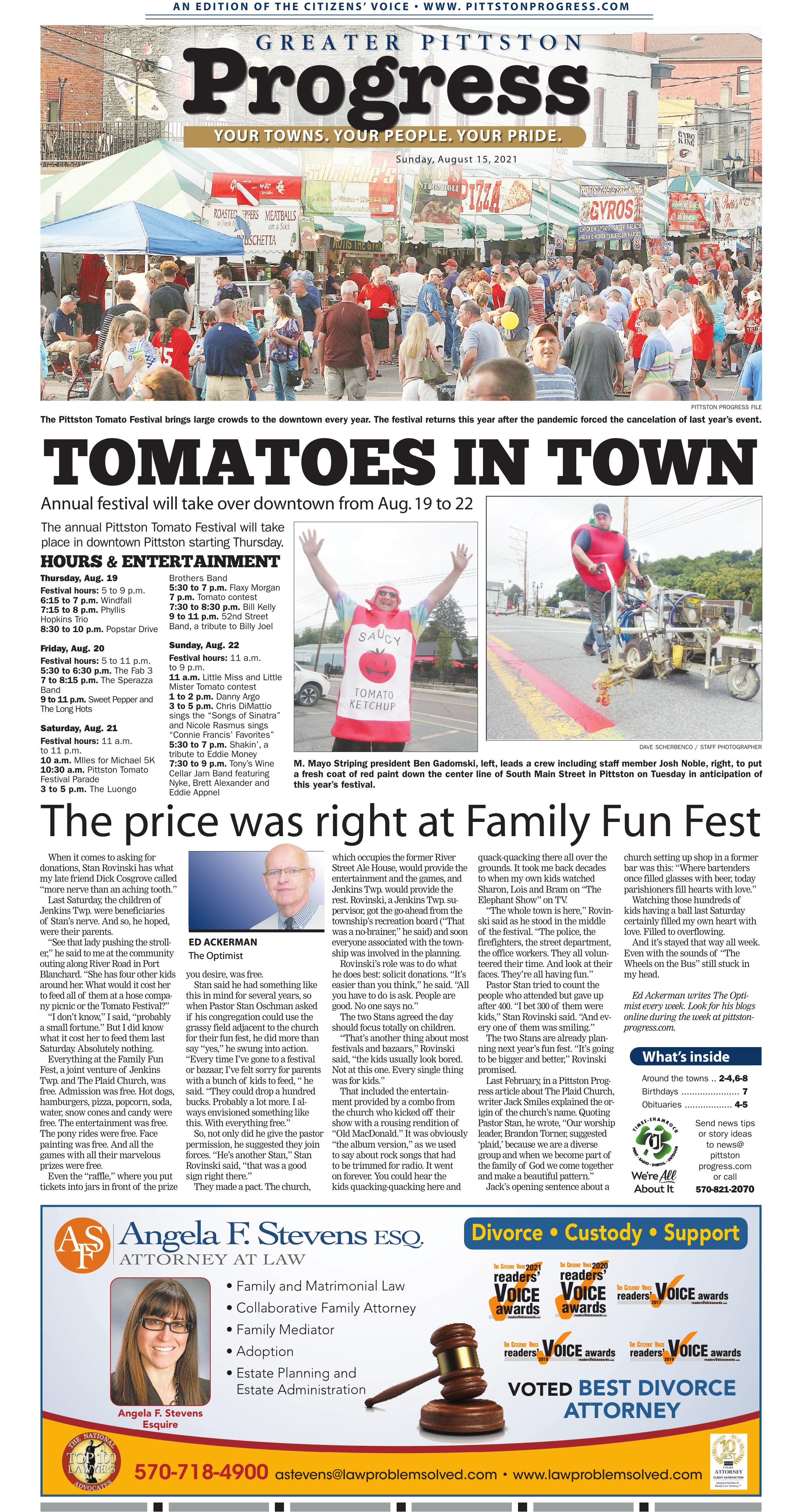 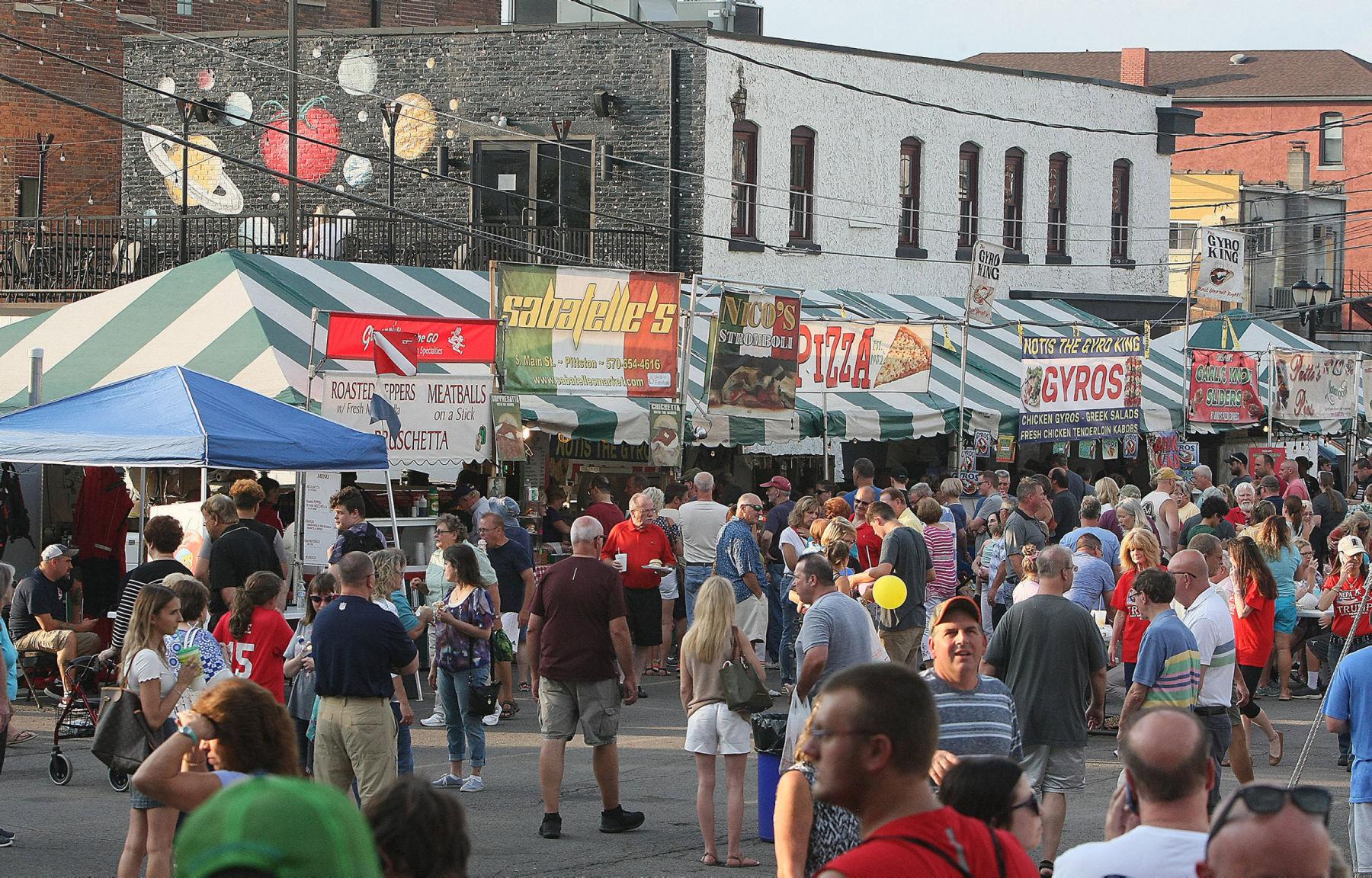 The Pittston Tomato Festival brings large crowds to the downtown every year. The festival returns this year after the pandemic forced the cancelation of last year’s event. 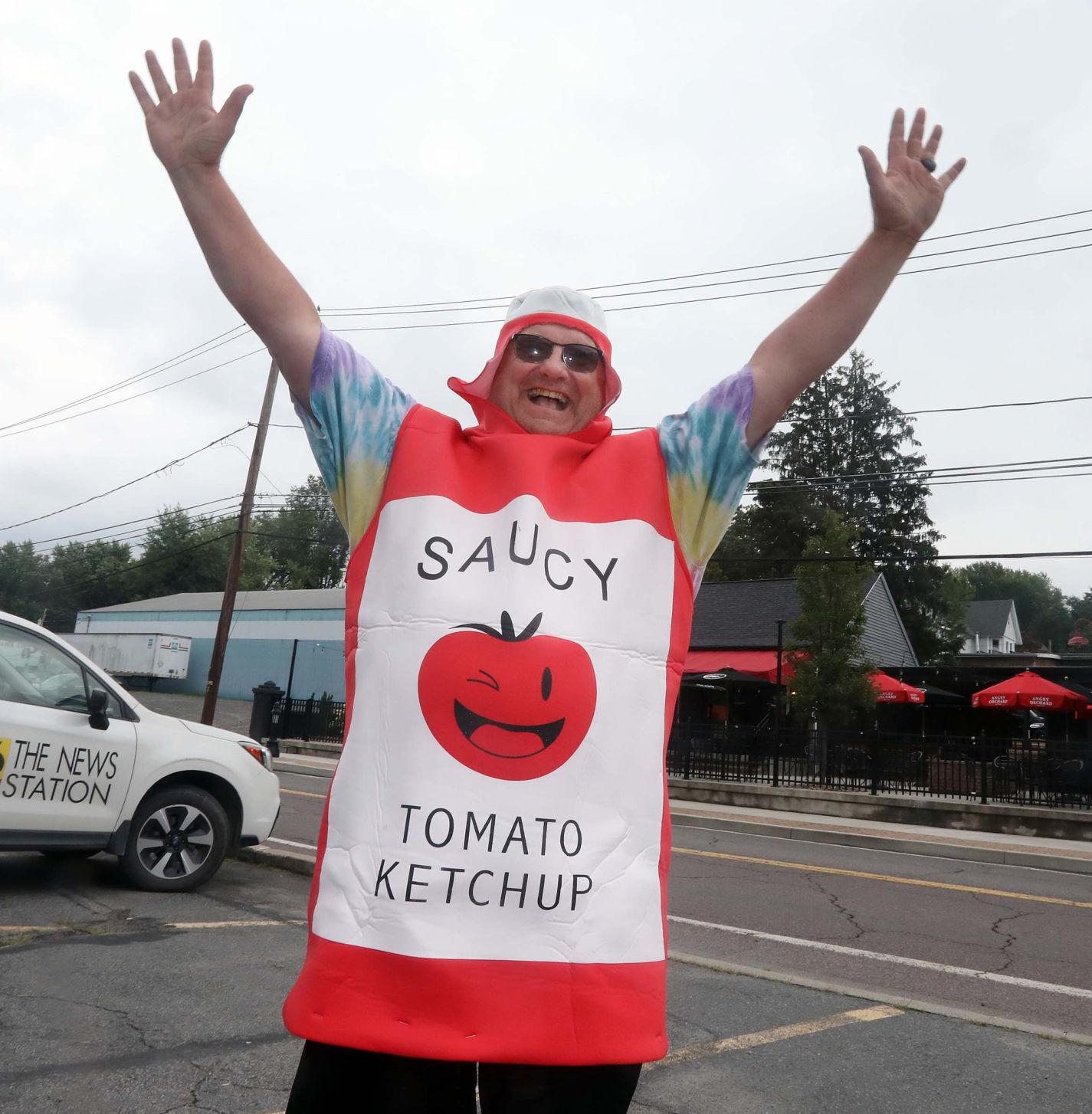 M.Mayo Striping President Ben Gadomski is all fired up before leading his crew to lay down a fresh coat of red paint down the center line on South Main Street in Pittston Tuesday Morning in anticipation of this years Pittston Tomato Festival being held in the downtown area August 19th - 22nd.

When it comes to asking for donations, Stan Rovinski has what my late friend Dick Cosgrove called “more nerve than an aching tooth.”

Last Saturday, the children of Jenkins Twp. were beneficiaries of Stan’s nerve. And so, he hoped, were their parents.

“See that lady pushing the stroller,” he said to me at the community outing along River Road in Port Blanchard. “She has four other kids around her. What would it cost her to feed all of them at a hose company picnic or the Tomato Festival?”

“I don’t know,” I said, “probably a small fortune.” But I did know what it cost her to feed them last Saturday. Absolutely nothing.

Everything at the Family Fun Fest, a joint venture of Jenkins Twp. and The Plaid Church, was free. Admission was free. Hot dogs, hamburgers, pizza, popcorn, soda, water, snow cones and candy were free. The entertainment was free. The pony rides were free. Face painting was free. And all the games with all their marvelous prizes were free.

Even the “raffle,” where you put tickets into jars in front of the prize you desire, was free.

Stan said he had something like this in mind for several years, so when Pastor Stan Oschman asked if his congregation could use the grassy field adjacent to the church for their fun fest, he did more than say “yes,” he swung into action. “Every time I’ve gone to a festival or bazaar, I’ve felt sorry for parents with a bunch of kids to feed, “ he said. “They could drop a hundred bucks. Probably a lot more. I always envisioned something like this. With everything free.”

So, not only did he give the pastor permission, he suggested they join forces. “He’s another Stan,” Stan Rovinski said, “that was a good sign right there.”

They made a pact. The church, which occupies the former River Street Ale House, would provide the entertainment and the games, and Jenkins Twp. would provide the rest. Rovinski, a Jenkins Twp. supervisor, got the go-ahead from the township’s recreation board (“That was a no-brainer,” he said) and soon everyone associated with the township was involved in the planning.

Rovinski’s role was to do what he does best: solicit donations. “It’s easier than you think,” he said. “All you have to do is ask. People are good. No one says no.”

The two Stans agreed the day should focus totally on children.

“That’s another thing about most festivals and bazaars,” Rovinski said, “the kids usually look bored. Not at this one. Every single thing was for kids.”

That included the entertainment provided by a combo from the church who kicked off their show with a rousing rendition of “Old MacDonald.” It was obviously “the album version,” as we used to say about rock songs that had to be trimmed for radio. It went on forever. You could hear the kids quacking-quacking here and quack-quacking there all over the grounds. It took me back decades to when my own kids watched Sharon, Lois and Bram on “The Elephant Show” on TV.

“The whole town is here,” Rovinski said as he stood in the middle of the festival. “The police, the firefighters, the street department, the office workers. They all volunteered their time. And look at their faces. They’re all having fun.”

Pastor Stan tried to count the people who attended but gave up after 400. “I bet 300 of them were kids,” Stan Rovinski said. “And every one of them was smiling.”

The two Stans are already planning next year’s fun fest. “It’s going to be bigger and better,” Rovinski promised.

Last February, in a Pittston Progress article about The Plaid Church, writer Jack Smiles explained the origin of the church’s name. Quoting Pastor Stan, he wrote, “Our worship leader, Brandon Torner, suggested ‘plaid,’ because we are a diverse group and when we become part of the family of God we come together and make a beautiful pattern.”

Jack’s opening sentence about a church setting up shop in a former bar was this: “Where bartenders once filled glasses with beer, today parishioners fill hearts with love.”

Watching those hundreds of kids having a ball last Saturday certainly filled my own heart with love. Filled to overflowing.

And it’s stayed that way all week. Even with the sounds of “The Wheels on the Bus” still stuck in my head. 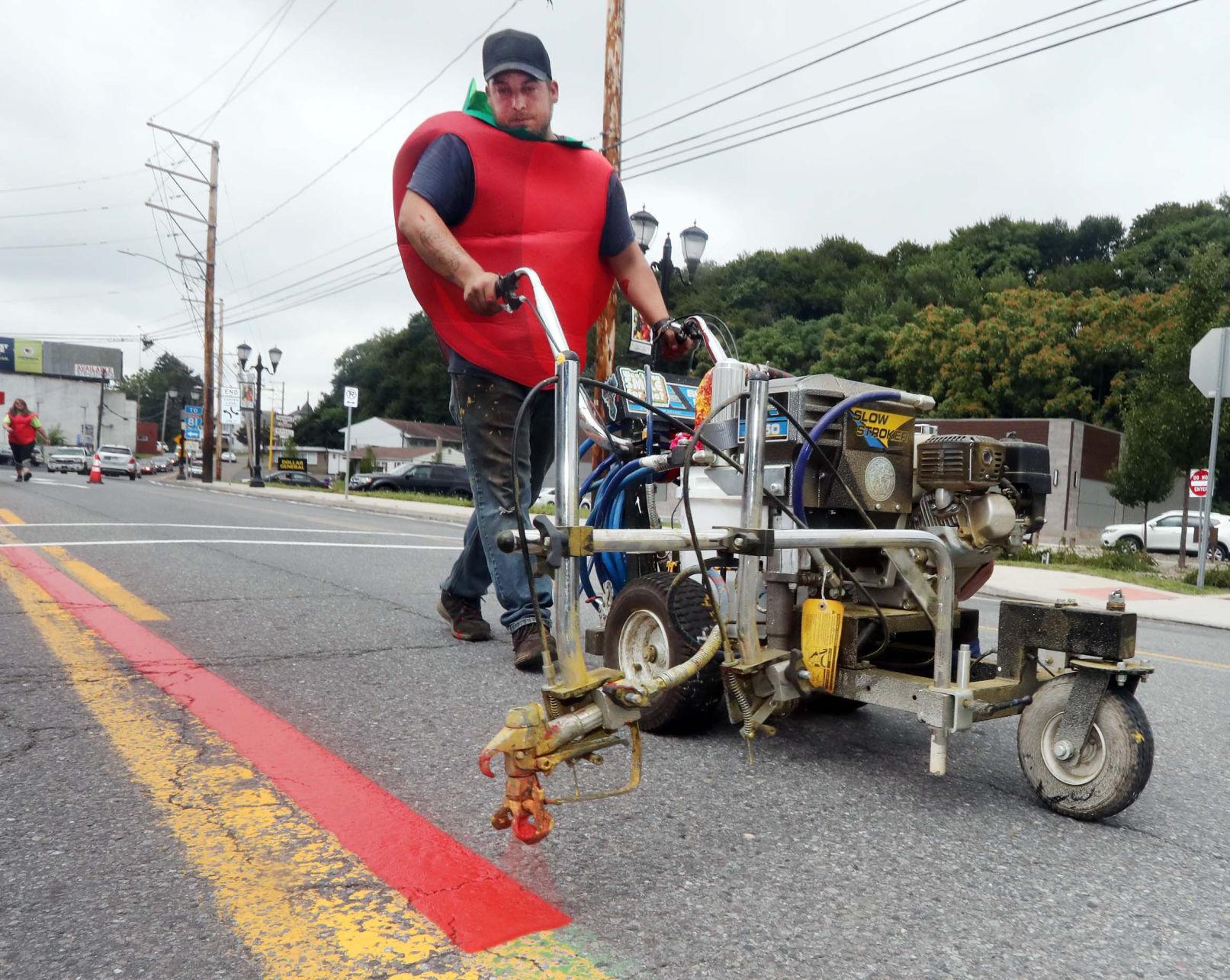 M. Mayo Striping staff member Josh Noble, above, lays a fresh coat of red paint down the center line of South Main Street in Pittston on Tuesday in anticipation of this year’s festival.