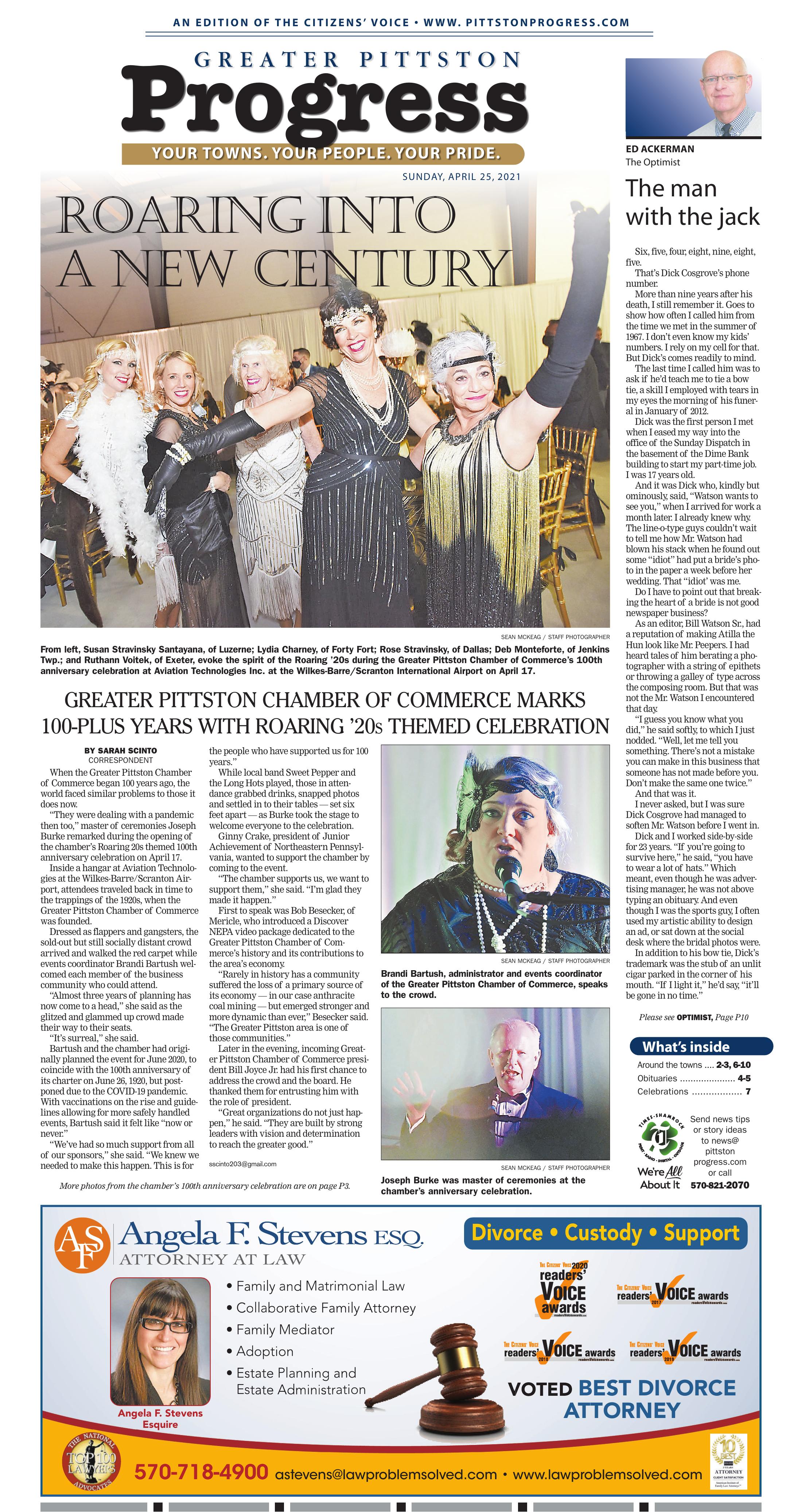 From left, Susan Stravinsky Santayana, of Luzerne; Lydia Charney, of Forty Fort; Rose Stravinsky, of Dallas; Deb Monteforte, of Jenkins Twp.; and Ruthann Voitek, of Exeter, evoke the spirit of the Roaring ’20s during the Greater Pittston Chamber of Commerce’s 100th anniversary celebration at Aviation Technologies Inc. at the Wilkes-Barre/Scranton International Airport on April 17.

Brandi Bartush, administrator and events coordinator of the Greater Pittston Chamber of Commerce, speaks to the crowd.

Joseph Burke was master of ceremonies at the chamber’s anniversary celebration.

When the Greater Pittston Chamber of Commerce began 100 years ago, the world faced similar problems to those it does now.

“They were dealing with a pandemic then too,” master of ceremonies Joseph Burke remarked during the opening of the chamber’s Roaring 20s themed 100th anniversary celebration on April 17.

Inside a hangar at Aviation Technologies at the Wilkes-Barre/Scranton Airport, attendees traveled back in time to the trappings of the 1920s, when the Greater Pittston Chamber of Commerce was founded.

Dressed as flappers and gangsters, the sold-out but still socially distant crowd arrived and walked the red carpet while events coordinator Brandi Bartush welcomed each member of the business community who could attend.

“Almost three years of planning has now come to a head,” she said as the glitzed and glammed up crowd made their way to their seats.

Bartush and the chamber had originally planned the event for June 2020, to coincide with the 100th anniversary of its charter on June 26, 1920, but postponed due to the COVID-19 pandemic. With vaccinations on the rise and guidelines allowing for more safely handled events, Bartush said it felt like “now or never.”

“We’ve had so much support from all of our sponsors,” she said. “We knew we needed to make this happen. This is for the people who have supported us for 100 years.”

While local band Sweet Pepper and the Long Hots played, those in attendance grabbed drinks, snapped photos and settled in to their tables — set six feet apart — as Burke took the stage to welcome everyone to the celebration.

Ginny Crake, president of Junior Achievement of Northeastern Pennsylvania, wanted to support the chamber by coming to the event.

“The chamber supports us, we want to support them,” she said. “I’m glad they made it happen.”

First to speak was Bob Besecker, of Mericle, who introduced a Discover NEPA video package dedicated to the Greater Pittston Chamber of Commerce’s history and its contributions to the area’s economy.

“Rarely in history has a community suffered the loss of a primary source of its economy — in our case anthracite coal mining — but emerged stronger and more dynamic than ever,” Besecker said. “The Greater Pittston area is one of those communities.”

Later in the evening, incoming Greater Pittston Chamber of Commerce president Bill Joyce Jr. had his first chance to address the crowd and the board. He thanked them for entrusting him with the role of president.

“Great organizations do not just happen,” he said. “They are built by strong leaders with vision and determination to reach the greater good.”

The_optimist
The man with the jack

More than nine years after his death, I still remember it. Goes to show how often I called him from the time we met in the summer of 1967. I don’t even know my kids’ numbers. I rely on my cell for that. But Dick’s comes readily to mind.

The last time I called him was to ask if he’d teach me to tie a bow tie, a skill I employed with tears in my eyes the morning of his funeral in January of 2012.

Dick was the first person I met when I eased my way into the office of the Sunday Dispatch in the basement of the Dime Bank building to start my part-time job. I was 17 years old.

And it was Dick who, kindly but ominously, said, “Watson wants to see you,” when I arrived for work a month later. I already knew why. The line-o-type guys couldn’t wait to tell me how Mr. Watson had blown his stack when he found out some “idiot” had put a bride’s photo in the paper a week before her wedding. That “idiot’ was me.

Do I have to point out that breaking the heart of a bride is not good newspaper business?

As an editor, Bill Watson Sr., had a reputation of making Atilla the Hun look like Mr. Peepers. I had heard tales of him berating a photographer with a string of epithets or throwing a galley of type across the composing room. But that was not the Mr. Watson I encountered that day.

“I guess you know what you did,” he said softly, to which I just nodded. “Well, let me tell you something. There’s not a mistake you can make in this business that someone has not made before you. Don’t make the same one twice.”

And that was it.

I never asked, but I was sure Dick Cosgrove had managed to soften Mr. Watson before I went in.

Dick and I worked side-by-side for 23 years. “If you’re going to survive here,” he said, “you have to wear a lot of hats.” Which meant, even though he was advertising manager, he was not above typing an obituary. And even though I was the sports guy, I often used my artistic ability to design an ad, or sat down at the social desk where the bridal photos were.

In addition to his bow tie, Dick’s trademark was the stub of an unlit cigar parked in the corner of his mouth. “If I light it,” he’d say, “it’ll be gone in no time.”

You can’t be Irish without being quick with a joke, and Dick Cosgrove lived up to his heritage. One that comes to mind involves the old set-up of a guy’s car breaking down on a country road in the middle of the night. It was a flat tire this time, and the guy discovers he has no jack. He sees a farm house in the distance, of course, and off he goes.

On the way, his mind takes over. “The farmer’s probably sleeping. Has to be up early. I bet he’ll be mad. But what can I do? It’s not my fault I got a flat. He’ll probably call me stupid for not having a jack. But how was I to know there was no jack in the rental? He’ll probably look at my suit and muddy dress shoes and smirk. Well, screw him. There’s nothing wrong with wearing a suit to work. You don’t have to get your hands dirty to be a man.”

By the time he reaches the door, he has himself so worked up that when the sleepy-eyed farmer opens it and says, “Can I help, buddy?” the man shouts, “Stick the jack up your …,” and storms off.

From the time he first told that joke, Dick used it to defuse potentially volatile situations. Whether someone was about to call the diner to complain about the lunch order, or about to sit down to write a stinging editorial, Dick would say, “Careful now. Don’t be like the man with the jack.”

I doubt Dick used that expression on Mr. Watson in the summer of ’67, but I suspect he said something along those lines to get him to go easy on me.

That was Dick Cosgrove’s way. He lived his Christian faith. Where there was discord, he sought to sow peace.

Which makes it quite appropriate that his sons, George and Joe, have decided to donate his former house, the home they grew up in on Market Street, to Habitat for Humanity. Its future residents are bound to experience a warmth there that has nothing to do with the heating system.