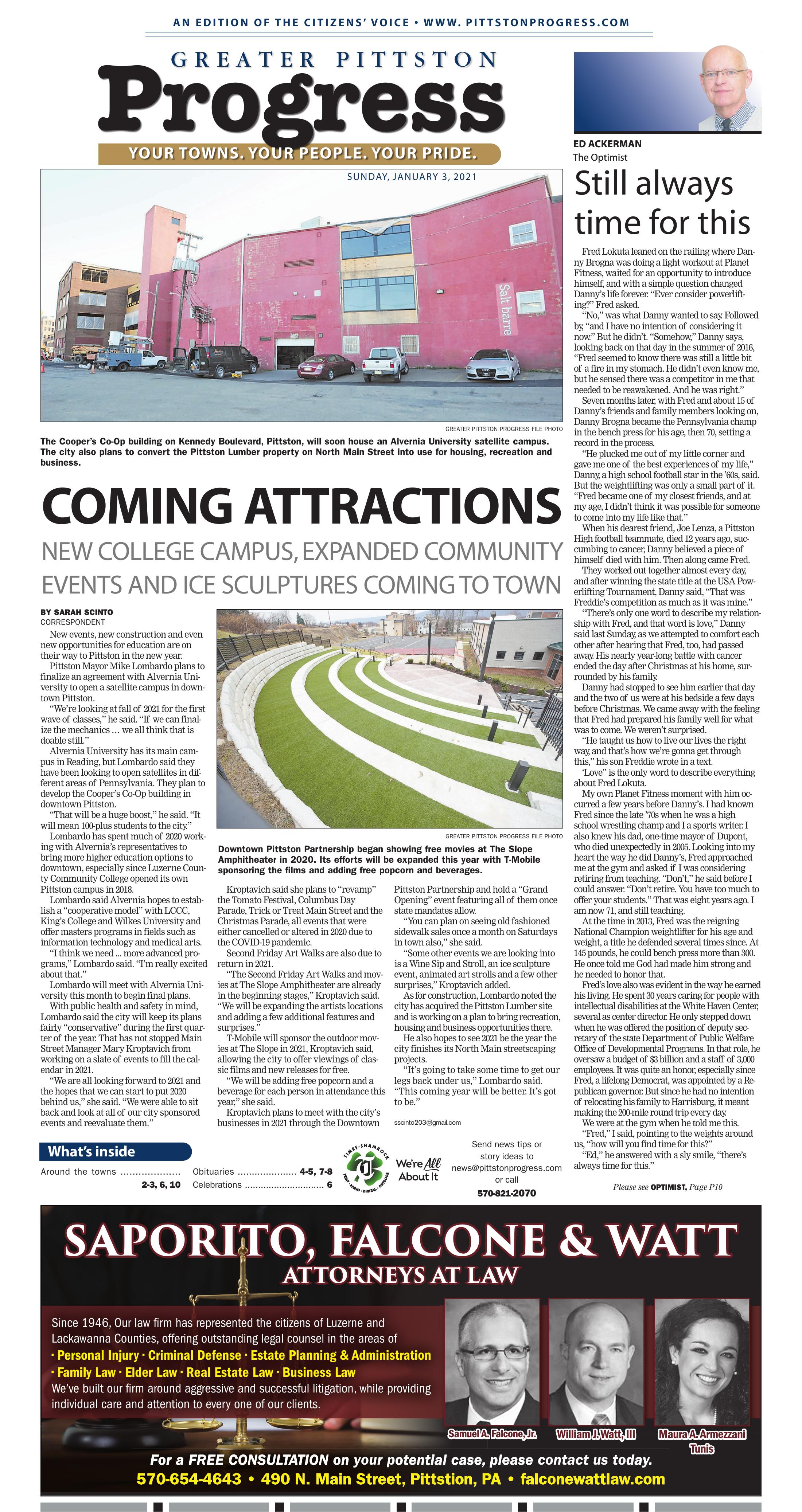 The Cooper’s Co-Op building on Kennedy Boulevard in Pittston could house an Alvernia University satellite campus. Negotiations between the university and city officials are ongoing.

Downtown Pittston Partnership began showing free movies at The Slope Amphitheater in 2020. Its efforts will be expanded this year with T-Mobile sponsoring the films and adding free popcorn and beverages.

New events, new construction and even new opportunities for education are on their way to Pittston in the new year.

Pittston Mayor Mike Lombardo plans to finalize an agreement with Alvernia University to open a satellite campus in downtown Pittston.

“We’re looking at fall of 2021 for the first wave of classes,” he said. “If we can finalize the mechanics … we all think that is doable still.”

Alvernia University has its main campus in Reading, but Lombardo said they have been looking to open satellites in different areas of Pennsylvania. They plan to develop the Cooper’s Co-Op building in downtown Pittston.

Lombardo has spent much of 2020 working with Alvernia’s representatives to bring more higher education options to downtown, especially since Luzerne County Community College opened its own Pittston campus in 2018.

Lombardo said Alvernia hopes to establish a “cooperative model” with LCCC, King’s College and Wilkes University and offer masters programs in fields such as information technology and medical arts.

Lombardo will meet with Alvernia University this month to begin final plans.

With public health and safety in mind, Lombardo said the city will keep its plans fairly “conservative” during the first quarter of the year. That has not stopped Main Street Manager Mary Kroptavich from working on a slate of events to fill the calendar in 2021.

“We are all looking forward to 2021 and the hopes that we can start to put 2020 behind us,” she said. “We were able to sit back and look at all of our city sponsored events and reevaluate them.”

Kroptavich said she plans to “revamp” the Tomato Festival, Columbus Day Parade, Trick or Treat Main Street and the Christmas Parade, all events that were either cancelled or altered in 2020 due to the COVID-19 pandemic.

Second Friday Art Walks are also due to return in 2021.

“The Second Friday Art Walks and movies at The Slope Amphitheater are already in the beginning stages,” Kroptavich said. “We will be expanding the artists locations and adding a few additional features and surprises.”

T-Mobile will sponsor the outdoor movies at The Slope in 2021, Kroptavich said, allowing the city to offer viewings of classic films and new releases for free.

“We will be adding free popcorn and a beverage for each person in attendance this year,” she said.

Kroptavich plans to meet with the city’s businesses in 2021 through the Downtown Pittston Partnership and hold a “Grand Opening” event featuring all of them once state mandates allow.

“You can plan on seeing old fashioned sidewalk sales once a month on Saturdays in town also,” she said.

“Some other events we are looking into is a Wine Sip and Stroll, an ice sculpture event, animated art strolls and a few other surprises,” Kroptavich added.

As for construction, Lombardo noted the city has acquired the Pittston Lumber site and is working on a plan to bring recreation, housing and business opportunities there.

He also hopes to see 2021 be the year the city finishes its North Main streetscaping projects.

“It’s going to take some time to get our legs back under us,” Lombardo said. “This coming year will be better. It’s got to be.”

Fred Lokuta leaned on the railing where Danny Brogna was doing a light workout at Planet Fitness, waited for an opportunity to introduce himself, and with a simple question changed Danny’s life forever. “Ever consider powerlifting?” Fred asked.

“No,” was what Danny wanted to say. Followed by, “and I have no intention of considering it now.” But he didn’t. “Somehow,” Danny says, looking back on that day in the summer of 2016, “Fred seemed to know there was still a little bit of a fire in my stomach. He didn’t even know me, but he sensed there was a competitor in me that needed to be reawakened. And he was right.”

Seven months later, with Fred and about 15 of Danny’s friends and family members looking on, Danny Brogna became the Pennsylvania champ in the bench press for his age, then 70, setting a record in the process.

“He plucked me out of my little corner and gave me one of the best experiences of my life,” Danny, a high school football star in the ’60s, said. But the weightlifting was only a small part of it. “Fred became one of my closest friends, and at my age, I didn’t think it was possible for someone to come into my life like that.”

When his dearest friend, Joe Lenza, a Pittston High football teammate, died 12 years ago, succumbing to cancer, Danny believed a piece of himself died with him. Then along came Fred.

They worked out together almost every day, and after winning the state title at the USA Powerlifting Tournament, Danny said, “That was Freddie’s competition as much as it was mine.”

“There’s only one word to describe my relationship with Fred, and that word is love,” Danny said last Sunday, as we attempted to comfort each other after hearing that Fred, too, had passed away. His nearly year-long battle with cancer ended the day after Christmas at his home, surrounded by his family.

Danny had stopped to see him earlier that day and the two of us were at his bedside a few days before Christmas. We came away with the feeling that Fred had prepared his family well for what was to come. We weren’t surprised.

“He taught us how to live our lives the right way, and that’s how we’re gonna get through this,” his son Freddie wrote in a text.

‘Love” is the only word to describe everything about Fred Lokuta.

My own Planet Fitness moment with him occurred a few years before Danny’s. I had known Fred since the late ’70s when he was a high school wrestling champ and I a sports writer. I also knew his dad, one-time mayor of Dupont, who died unexpectedly in 2005. Looking into my heart the way he did Danny’s, Fred approached me at the gym and asked if I was considering retiring from teaching. “Don’t,” he said before I could answer. “Don’t retire. You have too much to offer your students.” That was eight years ago. I am now 71, and still teaching.

At the time in 2013, Fred was the reigning National Champion weightlifter for his age and weight, a title he defended several times since. At 145 pounds, he could bench press more than 300. He once told me God had made him strong and he needed to honor that.

Fred’s love also was evident in the way he earned his living. He spent 30 years caring for people with intellectual disabilities at the White Haven Center, several as center director. He only stepped down when he was offered the position of deputy secretary of the state Department of Public Welfare Office of Developmental Programs. In that role, he oversaw a budget of $3 billion and a staff of 3,000 employees. It was quite an honor, especially since Fred, a lifelong Democrat, was appointed by a Republican governor. But since he had no intention of relocating his family to Harrisburg, it meant making the 200-mile round trip every day.

We were at the gym when he told me this.

“Fred,” I said, pointing to the weights around us, “how will you find time for this?”

“Ed,” he answered with a sly smile, “there’s always time for this.”

Those words have rung in my ears since. Especially when I’d feel life and all its responsibilities closing in and would be tempted to put working out on the back burner. All I’d have to do was think of Fred waking up at 3 a.m. to hit the gym before heading to Harrisburg and I say to myself, “There’s always time for this.”

But Fred’s words have much broader implications. Yes, Fred’s “this” that there was always time for was his daily workout, but it was not his only “this.” Another was his God. Another his family. Another his friends, the Danny Brognas and Ed Ackermans of his world. There was time for all of it. And all of us.

That’s the lesson I learned from Fred. To be mindful of every “this” in my own life. And to remember there is always time for each. As long as we want there to be.

Ed Ackerman writes The Optimist. Look for his blogs online at pittstonprogress.com.