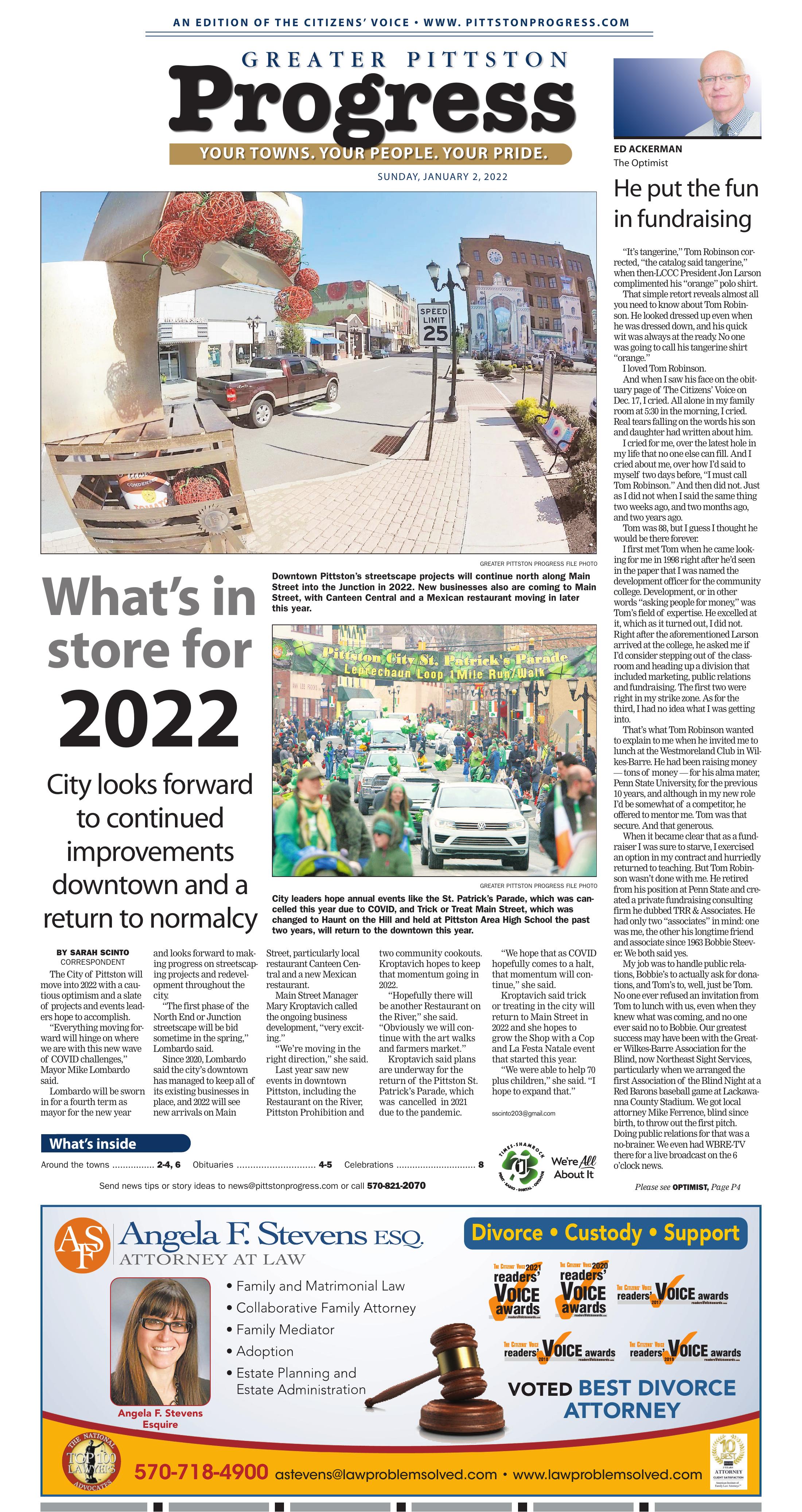 Downtown Pittston’s streetscape projects will continue north along Main Street into the Junction in 2022. New businesses also are coming to Main Street, with Canteen Central and a Mexican restaurant moving in later this year.

City leaders hope annual events like the St. Patrick’s Parade, which was cancelled this year due to COVID, and Trick or Treat Main Street, which was changed to Haunt on the Hill and held at Pittston Area High School the past two years, will return to the downtown this year.

The City of Pittston will move into 2022 with a cautious optimism and a slate of projects and events leaders hope to accomplish.

“Everything moving forward will hinge on where we are with this new wave of COVID challenges,” Mayor Mike Lombardo said.

Lombardo will be sworn in for a fourth term as mayor for the new year and looks forward to making progress on streetscaping projects and redevelopment throughout the city.

“The first phase of the North End or Junction streetscape will be bid sometime in the spring,” Lombardo said.

Since 2020, Lombardo said the city’s downtown has managed to keep all of its existing businesses in place, and 2022 will see new arrivals on Main Street, particularly local restaurant Canteen Central and a new Mexican restaurant.

“We’re moving in the right direction,” she said.

Last year saw new events in downtown Pittston, including the Restaurant on the River, Pittston Prohibition and two community cookouts. Kroptavich hopes to keep that momentum going in 2022.

“Hopefully there will be another Restaurant on the River,” she said. “Obviously we will continue with the art walks and farmers market.”

Kroptavich said plans are underway for the return of the Pittston St. Patrick’s Parade, which was cancelled in 2021 due to the pandemic.

“We hope that as COVID hopefully comes to a halt, that momentum will continue,” she said.

Kroptavich said trick or treating in the city will return to Main Street in 2022 and she hopes to grow the Shop with a Cop and La Festa Natale event that started this year.

The_optimist
He put the fun in fundraising
Warren Ruda

That simple retort reveals almost all you need to know about Tom Robinson. He looked dressed up even when he was dressed down, and his quick wit was always at the ready. No one was going to call his tangerine shirt “orange.”

And when I saw his face on the obituary page of The Citizens’ Voice on Dec. 17, I cried. All alone in my family room at 5:30 in the morning, I cried. Real tears falling on the words his son and daughter had written about him.

I cried for me, over the latest hole in my life that no one else can fill. And I cried about me, over how I’d said to myself two days before, “I must call Tom Robinson.” And then did not. Just as I did not when I said the same thing two weeks ago, and two months ago, and two years ago.

Tom was 88, but I guess I thought he would be there forever.

I first met Tom when he came looking for me in 1998 right after he’d seen in the paper that I was named the development officer for the community college. Development, or in other words “asking people for money,” was Tom’s field of expertise. He excelled at it, which as it turned out, I did not. Right after the aforementioned Larson arrived at the college, he asked me if I’d consider stepping out of the classroom and heading up a division that included marketing, public relations and fundraising. The first two were right in my strike zone. As for the third, I had no idea what I was getting into.

That’s what Tom Robinson wanted to explain to me when he invited me to lunch at the Westmoreland Club in Wilkes-Barre. He had been raising money — tons of money — for his alma mater, Penn State University, for the previous 10 years, and although in my new role I’d be somewhat of a competitor, he offered to mentor me. Tom was that secure. And that generous.

When it became clear that as a fundraiser I was sure to starve, I exercised an option in my contract and hurriedly returned to teaching. But Tom Robinson wasn’t done with me. He retired from his position at Penn State and created a private fundraising consulting firm he dubbed TRR & Associates. He had only two “associates” in mind: one was me, the other his longtime friend and associate since 1963 Bobbie Steever. We both said yes.

My job was to handle public relations, Bobbie’s to actually ask for donations, and Tom’s to, well, just be Tom. No one ever refused an invitation from Tom to lunch with us, even when they knew what was coming, and no one ever said no to Bobbie. Our greatest success may have been with the Greater Wilkes-Barre Association for the Blind, now Northeast Sight Services, particularly when we arranged the first Association of the Blind Night at a Red Barons baseball game at Lackawanna County Stadium. We got local attorney Mike Ferrence, blind since birth, to throw out the first pitch. Doing public relations for that was a no-brainer. We even had WBRE-TV there for a live broadcast on the 6 o’clock news.

Tom’s charm was key to it all. He was a classic man about town, always present, always willing to lend a hand, and always providing a positive outlook. “He always made me feel good and believe I could conquer the world,” a friend was quoted in his obituary.

Tom had a weekly lunch date at Genetti’s in Wilkes-Barre with a group of friends. When one announced he had been put on oxygen and couldn’t attend, Tom would have none of it. He picked him up and when lunch was over, told him to stand by the door while he went for the car. Halfway home to Dallas, Tom realized why he had this haunting feeling he was forgetting something. He raced back to Genetti’s where his friend was patiently waiting, despite running out of oxygen. Tom loved telling that story. His self-confidence was tempered by his self-deprecation.

I never knew Tom’s wife, Beverly, who died before we met, but I’m told he was devoted to her, especially during her final years. That comes as no surprise.

Tom’s son Rob and daughter Lisa made sure they honored his wishes by dressing him in a stylist tuxedo for his viewing. Lisa called my attention to the monogrammed cuffs on his crisp formal shirt.

“That is so Tom,” I said, “but I doubt God needed a monogram to remind him who this was arriving in Heaven.”