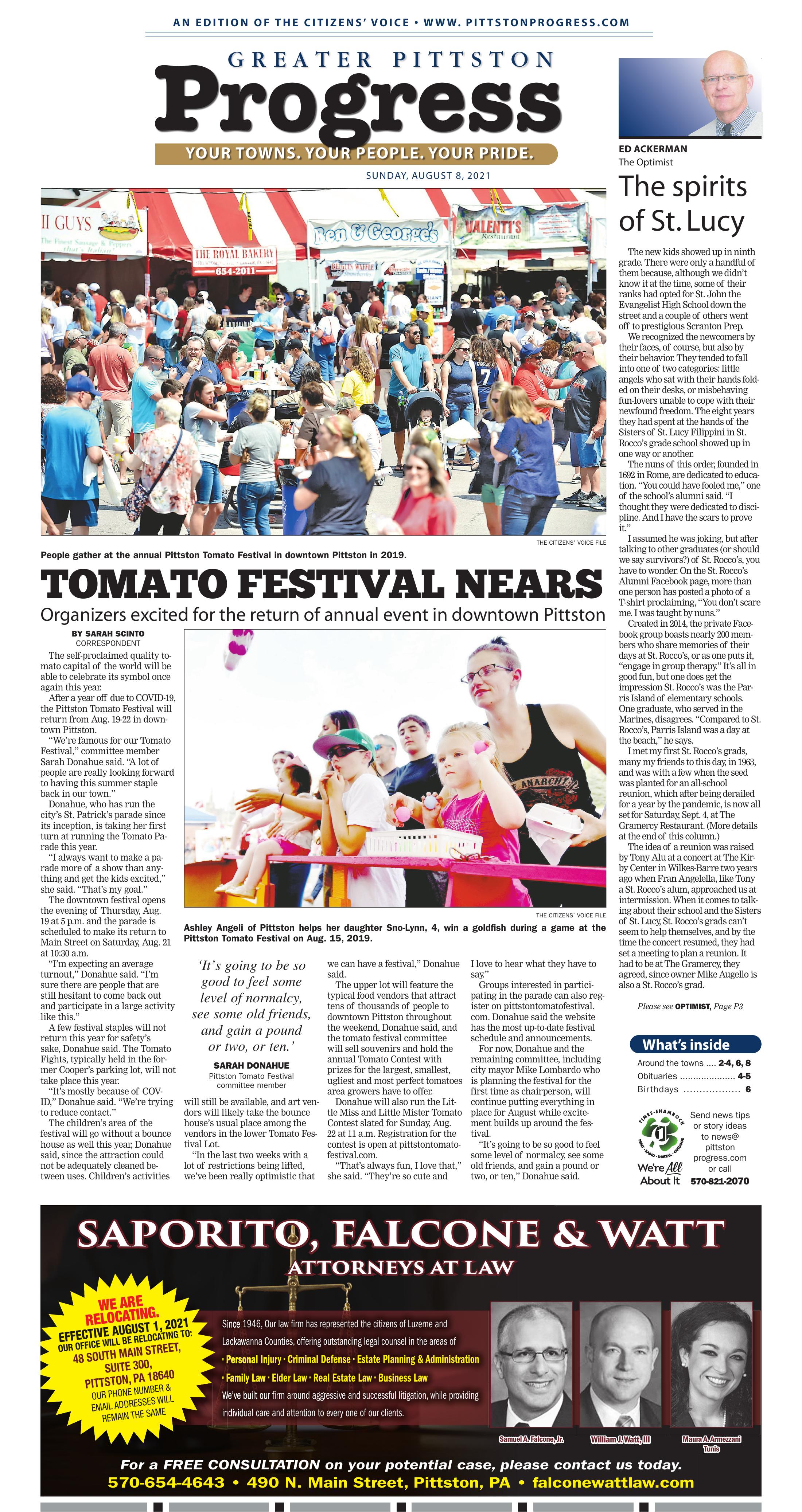 The self-proclaimed quality tomato capital of the world will be able to celebrate its symbol once again this year.

After a year off due to COVID-19, the Pittston Tomato Festival will return from Aug. 19-22 in downtown Pittston.

“We’re famous for our Tomato Festival,” committee member Sarah Donahue said. “A lot of people are really looking forward to having this summer staple back in our town.”

Donahue, who has run the city’s St. Patrick’s parade since its inception, is taking her first turn at running the Tomato Parade this year.

“I always want to make a parade more of a show than anything and get the kids excited,” she said. “That’s my goal.”

The downtown festival opens the evening of Thursday, Aug. 19 at 5 p.m. and the parade is scheduled to make its return to Main Street on Saturday, Aug. 21 at 10:30 a.m.

“I’m expecting an average turnout,” Donahue said. “I’m sure there are people that are still hesitant to come back out and participate in a large activity like this.”

A few festival staples will not return this year for safety’s sake, Donahue said. The Tomato Fights, typically held in the former Cooper’s parking lot, will not take place this year.

The children’s area of the festival will go without a bounce house as well this year, Donahue said, since the attraction could not be adequately cleaned between uses. Children’s activities will still be available, and art vendors will likely take the bounce house’s usual place among the vendors in the lower Tomato Festival Lot.

“In the last two weeks with a lot of restrictions being lifted, we’ve been really optimistic that we can have a festival,” Donahue said.

The upper lot will feature the typical food vendors that attract tens of thousands of people to downtown Pittston throughout the weekend, Donahue said, and the tomato festival committee will sell souvenirs and hold the annual Tomato Contest with prizes for the largest, smallest, ugliest and most perfect tomatoes area growers have to offer.

Donahue will also run the Little Miss and Little Mister Tomato Contest slated for Sunday, Aug. 22 at 11 a.m. Registration for the contest is open at pittstontomatofestival.com.

“That’s always fun, I love that,” she said. “They’re so cute and I love to hear what they have to say.”

Groups interested in participating in the parade can also register on pittstontomatofestival.com. Donahue said the website has the most up-to-date festival schedule and announcements.

For now, Donahue and the remaining committee, including city mayor Mike Lombardo who is planning the festival for the first time as chairperson, will continue putting everything in place for August while excitement builds up around the festival.

“It’s going to be so good to feel some level of normalcy, see some old friends, and gain a pound or two, or ten,” Donahue said.

The festival will also feature live music throughout the weekend.

Windfall will kick off the music lineup at 6:15 p.m. on Thursday, Aug. 19, followed by the Phyllis Hopkins Trio and Popstar Drive.

Friday, Aug. 20 will feature Fab 3 starting at 5:30 p.m., followed by The Sperazza Band and Sweet Pepper and the Long Hots.

The bandshell will host the Luongo Brothers Band, Flaxy Morgan, Bill Kelly and 52nd Street Band on Saturday night, and Sunday's lineup will include Danny Argo, Chris DiMattio and Nicole Rasmus, Shakin- A Tribute to Eddie Money and finally the Tony's Wine Cellar Jam Band will close the festival on Sunday night.

The new kids showed up in ninth grade. There were only a handful of them because, although we didn’t know it at the time, some of their ranks had opted for St. John the Evangelist High School down the street and a couple of others went off to prestigious Scranton Prep.

We recognized the newcomers by their faces, of course, but also by their behavior. They tended to fall into one of two categories: little angels who sat with their hands folded on their desks, or misbehaving fun-lovers unable to cope with their newfound freedom. The eight years they had spent at the hands of the Sisters of St. Lucy Filippini in St. Rocco’s grade school showed up in one way or another.

The nuns of this order, founded in 1692 in Rome, are dedicated to education. “You could have fooled me,” one of the school’s alumni said. “I thought they were dedicated to discipline. And I have the scars to prove it.”

I assumed he was joking, but after talking to other graduates (or should we say survivors?) of St. Rocco’s, you have to wonder. On the St. Rocco’s Alumni Facebook page, more than one person has posted a photo of a T-shirt proclaiming, “You don’t scare me. I was taught by nuns.”

Created in 2014, the private Facebook group boasts nearly 200 members who share memories of their days at St. Rocco’s, or as one puts it, “engage in group therapy.” It’s all in good fun, but one does get the impression St. Rocco’s was the Parris Island of elementary schools. One graduate, who served in the Marines, disagrees. “Compared to St. Rocco’s, Parris Island was a day at the beach,” he says.

I met my first St. Rocco’s grads, many my friends to this day, in 1963, and was with a few when the seed was planted for an all-school reunion, which after being derailed for a year by the pandemic, is now all set for Saturday, Sept. 4, at The Gramercy Restaurant. (More details at the end of this column.)

The idea of a reunion was raised by Tony Alu at a concert at The Kirby Center in Wilkes-Barre two years ago when Fran Angelella, like Tony a St. Rocco’s alum, approached us at intermission. When it comes to talking about their school and the Sisters of St. Lucy, St. Rocco’s grads can’t seem to help themselves, and by the time the concert resumed, they had set a meeting to plan a reunion. It had to be at The Gramercy, they agreed, since owner Mike Augello is also a St. Rocco’s grad.

Alu, who recalls the names of every nun he encountered at St. Rocco’s, said when he was there, third and fourth grades were taught together in the same class as were fifth and sixth and seventh and eighth. “We had Sister Marie Caroline two years in a row,” he laments.

The combined grades made for some interesting situations. Tony’s younger sister, Carmella, wound up in the same class and during a geography test, she sat right across from him. “What’s the capital of Alaska?” he whispered. “Juneau,” she said. “No, I don’t,” he kept whispering back.

Tony’s sister Debbie remembers preparing for confession in second grade and one day at lunch they didn’t notice one of their classmates was missing. When they got back to the classroom, the nun said, “Okay, Eddie, you can come out now.” He was put in the closet so he could get used to the dark of the confessional.

In his memoir “Tompkins Street,” the street on which St. Rocco’s church and school were located, Joe Schilacci writes about the Italian families there.

“If you went up one side, you had Latona, Lopresto, Ciali, Ranielli, Boccaso, Mastruzzo, Alu. If you went down the other side, you had … Iaconna, Guasto, Occhipenti, Schillaci, Sieta. All the kids went to St. Rocco’s school. The nuns were a big part of our lives. We feared them.”

Fear has a way of uniting people. Which is quite evident on that St. Rocco’s alumni Facebook page and will surely be evident at the reunion.

The reunion is open to all St. Rocco’s alumni and also to anyone with a connection to the church or school, even if they did not attend. Tickets are $60 per person. Checks may be made out and mailed to Tony Alu, 729 Ann St., Duryea, PA 18642. Deadline is Sunday, Aug. 15. Other members of the planning committee are Fran Angelella, Benny Piccillo, Joe Leone, Danny Argo and Debbie Alu Montini.