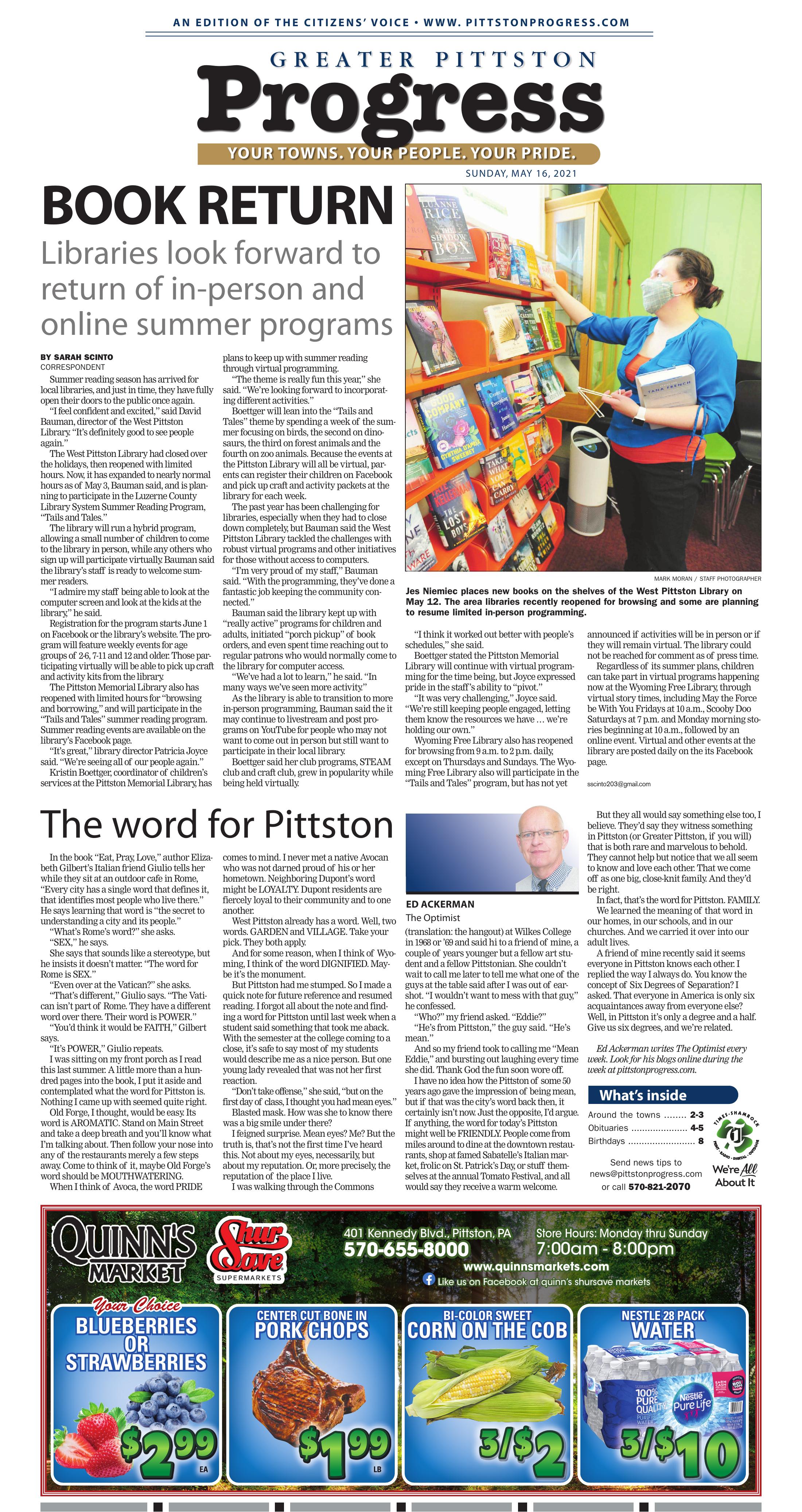 Jes Niemiec of the West Pittston Library places new books on the shelves Wednesday as this library and others in the Pittston area have recently reopened. Mark Moran cv051621wplibraryp1

West Pittston Library library and others in the Pittston area have recently reopened. Mark Moran cv051621wplibraryp4

Jes Niemiec places new books on the shelves of the West Pittston Library on May 12. The area libraries recently reopened for browsing and some are planning to resume limited in-person programming.

West Pittston Library library and others in the Pittston area have recently reopened. Mark Moran cv051621wplibraryp3

Summer reading season has arrived for local libraries, and just in time, they have fully open their doors to the public once again.

The West Pittston Library had closed over the holidays, then reopened with limited hours. Now, it has expanded to nearly normal hours as of May 3, Bauman said, and is planning to participate in the Luzerne County Library System Summer Reading Program, “Tails and Tales.”

The library will run a hybrid program, allowing a small number of children to come to the library in person, while any others who sign up will participate virtually. Bauman said the library’s staff is ready to welcome summer readers.

“I admire my staff being able to look at the computer screen and look at the kids at the library,” he said.

Registration for the program starts June 1 on Facebook or the library’s website. The program will feature weekly events for age groups of 2-6, 7-11 and 12 and older. Those participating virtually will be able to pick up craft and activity kits from the library.

The Pittston Memorial Library also has reopened with limited hours for “browsing and borrowing,” and will participate in the “Tails and Tales” summer reading program. Summer reading events are available on the library’s Facebook page.

Kristin Boettger, coordinator of children’s services at the Pittston Memorial Library, has plans to keep up with summer reading through virtual programming.

“The theme is really fun this year,” she said. “We’re looking forward to incorporating different activities.”

Boettger will lean into the “Tails and Tales” theme by spending a week of the summer focusing on birds, the second on dinosaurs, the third on forest animals and the fourth on zoo animals. Because the events at the Pittston Library will all be virtual, parents can register their children on Facebook and pick up craft and activity packets at the library for each week.

The past year has been challenging for libraries, especially when they had to close down completely, but Bauman said the West Pittston Library tackled the challenges with robust virtual programs and other initiatives for those without access to computers.

“I’m very proud of my staff,” Bauman said. “With the programming, they’ve done a fantastic job keeping the community connected.”

Bauman said the library kept up with “really active” programs for children and adults, initiated “porch pickup” of book orders, and even spent time reaching out to regular patrons who would normally come to the library for computer access.

“We’ve had a lot to learn,” he said. “In many ways we’ve seen more activity.”

As the library is able to transition to more in-person programming, Bauman said the it may continue to livestream and post programs on YouTube for people who may not want to come out in person but still want to participate in their local library.

“I think it worked out better with people’s schedules,” she said.

Boettger stated the Pittston Memorial Library will continue with virtual programming for the time being, but Joyce expressed pride in the staff’s ability to “pivot.”

“It was very challenging,” Joyce said. “We’re still keeping people engaged, letting them know the resources we have … we’re holding our own.”

Regardless of its summer plans, children can take part in virtual programs happening now at the Wyoming Free Library, through virtual story times, including May the Force be With You Fridays at 10 a.m., Scooby Doo Saturdays at 7 p.m. and Monday morning stories beginning at 10 a.m., followed by an online event. Virtual and other events at the library are posted daily on the its Facebook page.

The_optimist
The word for Pittston

In the book “Eat, Pray, Love,” author Elizabeth Gilbert’s Italian friend Giulio tells her while they sit at an outdoor cafe in Rome, “Every city has a single word that defines it, that identifies most people who live there.” He says learning that word is “the secret to understanding a city and its people.”

She says that sounds like a stereotype, but he insists it doesn’t matter. “The word for Rome is SEX.”

“Even over at the Vatican?” she asks.

“That’s different,” Giulio says. “The Vatican isn’t part of Rome. They have a different word over there. Their word is POWER.”

“You’d think it would be FAITH,” Gilbert says.

I was sitting on my front porch as I read this last summer. A little more than a hundred pages into the book, I put it aside and contemplated what the word for Pittston is. Nothing I came up with seemed quite right.

Old Forge, I thought, would be easy. Its word is AROMATIC. Stand on Main Street and take a deep breath and you’ll know what I’m talking about. Then follow your nose into any of the restaurants merely a few steps away. Come to think of it, maybe Old Forge’s word should be MOUTHWATERING.

When I think of Avoca, the word PRIDE comes to mind. I never met a native Avocan who was not darned proud of his or her hometown. Neighboring Dupont’s word might be LOYALTY. Dupont residents are fiercely loyal to their community and to one another.

West Pittston already has a word. Well, two words. GARDEN and VILLAGE. Take your pick. They both apply.

And for some reason, when I think of Wyoming, I think of the word DIGNIFIED. Maybe it’s the monument.

But Pittston had me stumped. So I made a quick note for future reference and resumed reading. I forgot all about the note and finding a word for Pittston until last week when a student said something that took me aback. With the semester at the college coming to a close, it’s safe to say most of my students would describe me as a nice person. But one young lady revealed that was not her first reaction.

“Don’t take offense,” she said, “but on the first day of class, I thought you had mean eyes.”

Blasted mask. How was she to know there was a big smile under there?

I feigned surprise. Mean eyes? Me? But the truth is, that’s not the first time I’ve heard this. Not about my eyes, necessarily, but about my reputation. Or, more precisely, the reputation of the place I live.

I was walking through the Commons (translation: the hangout) at Wilkes College in 1968 or ’69 and said hi to a friend of mine, a couple of years younger but a fellow art student and a fellow Pittstonian. She couldn’t wait to call me later to tell me what one of the guys at the table said after I was out of earshot. “I wouldn’t want to mess with that guy,” he confessed.

And so my friend took to calling me “Mean Eddie,” and bursting out laughing every time she did. Thank God the fun soon wore off.

I have no idea how the Pittston of some 50 years ago gave the impression of being mean, but if that was the city’s word back then, it certainly isn’t now. Just the opposite, I’d argue. If anything, the word for today’s Pittston might well be FRIENDLY. People come from miles around to dine at the downtown restaurants, shop at famed Sabatelle’s Italian market, frolic on St. Patrick’s Day, or stuff themselves at the annual Tomato Festival, and all would say they receive a warm welcome.

But they all would say something else too, I believe. They’d say they witness something in Pittston (or Greater Pittston, if you will) that is both rare and marvelous to behold. They cannot help but notice that we all seem to know and love each other. That we come off as one big, close-knit family. And they’d be right.

In fact, that’s the word for Pittston. FAMILY.

We learned the meaning of that word in our homes, in our schools, and in our churches. And we carried it over into our adult lives.

A friend of mine recently said it seems everyone in Pittston knows each other. I replied the way I always do. You know the concept of Six Degrees of Separation? I asked. That everyone in America is only six acquaintances away from everyone else? Well, in Pittston it’s only a degree and a half. Give us six degrees, and we’re related.